Of all the many social media outlets out there today, Facebook and twitter are the most popular in my opinion. These two social media phenomenas have several comparisons and differences in various ways. Facebook ranked number one in most used social network world wide, twitter isn’t to far behind on the list. This two social networks are appealing to billions of people all over the world because it helps you get connected with friends and you are able to communicate with them as well through tweets or Facebook chats.

Don't use plagiarized sources. Get your custom essay on
“ Rivalry in Nowadays Massculture: Facebook vs. Twitter ”
Get custom paper
NEW! smart matching with writer

First of all, the majority of people seem to think Facebook to be more popular than twitter. The main reason Mark Zuckerberg created Facebook was for people to connect with friends, current friends or friends from high school that you wish to get back in touch with.

You can potentially connect with new friends through Facebook as well and meet different people from all of the country.

The installed user base for Facebook hit one billion users at the end of september which considered by many to be a milestone that no other social network will surpass anytime soon. The reason users may not be a fan of Facebook or like twitter more is due to the fact that navigation and updates to Facebook or rather difficult and you invest more time into it.

When you message somebody on Facebook it’s unlikely that you will get an immediate response from that person unless they are currently on and get notified they have a new message.

On the other hand, Twitter’s popularity comes from how easily you can interact with people and you receive rapid response. People like the simplicity of twitter’s navigation and being able to send tweets whenever, if you tweet at someone and that person has the mobile app they will be notified immediately with the ability to respond quickly. Twitter’s similarities with texting are popular with the young crowd such as myself and other students all over the world. Unlike Facebooks large user base that attracts people, unfortunately twitter can’t compete with that, they are known for a much smaller user base. When sending tweets you are limited to only 140 characters, so you must be to the point when sending a tweet.

Among these two social networks differences there are also several similarities. You can download both of the networks mobile app to your smart phone and access the network from your phone. Facebook and twitter both allow you to upload pictures on your profile for people and friends to view. Tweets and statuses are similar in the sense users can see what you posted on the news feed, and the popularity and growth of both networks are the biggest similarity the two have in common.

Which one do you pick? I have both Facebook and twitter, I enjoy both of them and they are beneficial to my life. In the end I tend to like Facebook just a little bit more due to the interactiveness the network offers. Each network has its pros, cons and attracts people depending on the type of person you are. One person may like twitter better than Facebook, that’s fine and dandy as well, the user has there personal preference based on who they are. At the end of the day both social networks; Facebook and Twitter succeed to curb my enthusiasm. 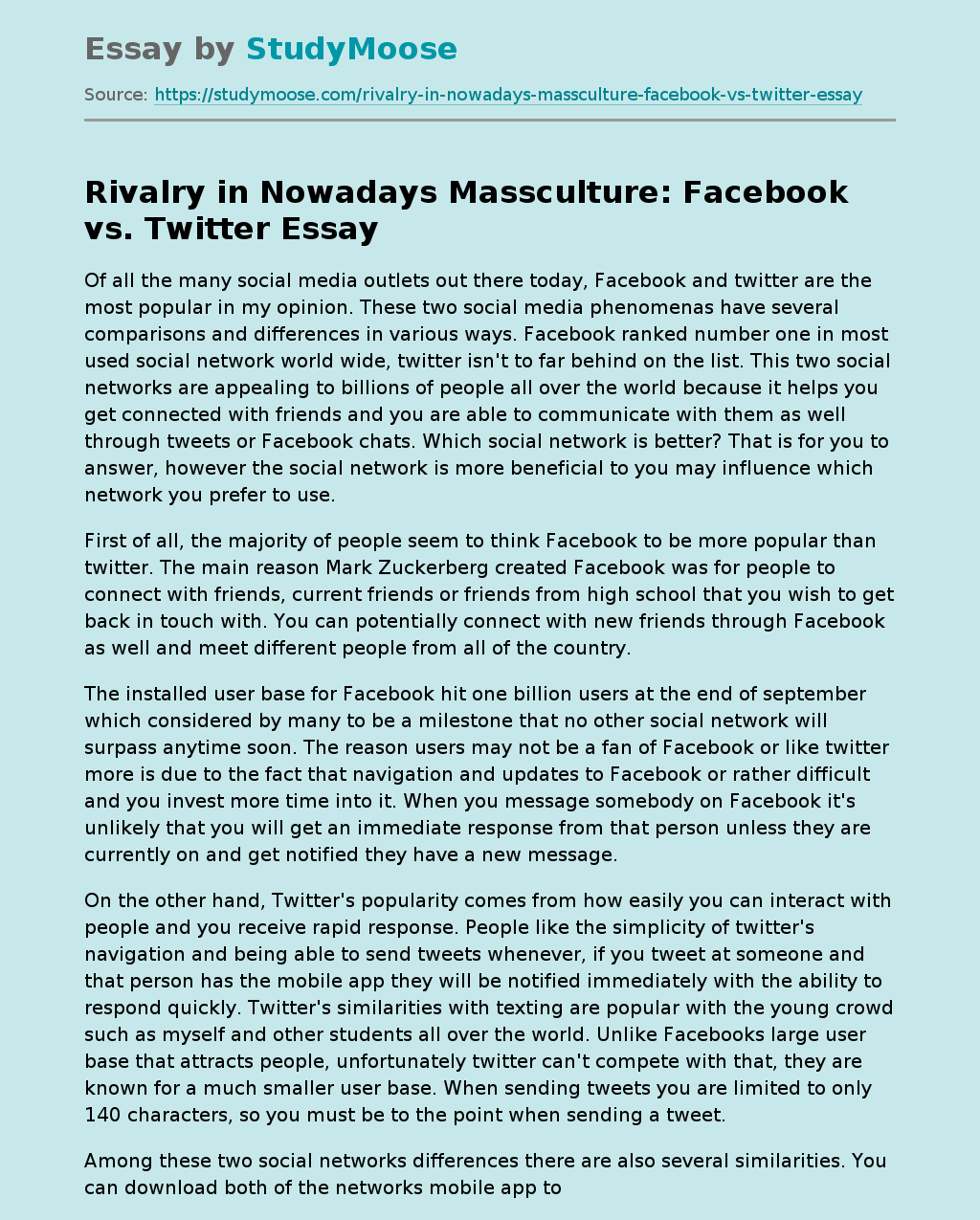