1. Twitter began as a web-based version of popular text messaging services provided by cell phone carriers. Basically, Twitter doesn’t make money. However, if a company signs up to blast messages to users, they could earn a profit. In April 2010, Twitter announced its first foray into the big-time ad marketplace with promoted Tweets. This was thought of as Twitter search engine. In June 2010, they announced their newest addition which was Promoted Trends. This trends section was on the home page that let users know what a lot of people are talking about.

Turn in your highest-quality paper
Get a qualified writer to help you with
“ Twitter Searches For A Business Model ”
Get high-quality paper
NEW! AI matching with writers

A company might pay Twitter so that they could have their product/company as a Popular Trend. Twitter also went on to have “earlybird” accounts, which users could follow to receive special offers from the company.

2. One revenue business model which Twitter could work with is Portals. Similar to Google, Bing and Yahoo’s unique search engines, Twitter has its own. Twitter is used for searching and reading news, finding entertainment, meeting other people and being exposed to advertisements.

Portals generate revenue primarily by attracting large audiences, charging advertisers, collecting referral fees from the advertisers, and charging for premium services. The most obvious revenue model for Twitter is Community Provider. Twitter provides an online meeting place where people with similar interests can communicate, transact, and share content with each other. Twitter would generate its revenue though subscription fees and advertising in their own unique way shown in Question 1.

3. Twitter’s main source of revenue comes from promoted tweets and trends which would make it Twitter’s biggest asset.

A problem is that these promoted trends and tweets don’t show up for mobile users. Therefore, Twitter could start off by updating their app for a certain price to include this feature. Another way to monetize their tweets is by following the steps of LinkedIn. This company sells data to the human resources departments of several corporations, Twitter could also start selling data to marketing departments. Finally, a “premium” user feature could also be explored. Corporations or celebrities might be interested in a rich control panel inside the Twitter account to monitor the effect of tweets and examine detailed analytics.

4. Twitter has a 60 percent churn rate. Obviously, many users lose interest in some boring tweets of friends. However, there are many celebrities such as Leonardo DiCaprio. His tweet is already so popular. If he said “This item is cool”, many people purchase the same one as Leonardo DiCaprio. Twitter is a free public relations tool but unfortunately, they don’t make a cent off it. What Do You Think? :

1. I searched up the Ford Mustang GT and found the official page of Ford. You could see all their tweets and it would direct you back to its own website which is great for advertising. The risks of this are that everyone will be able to see this information. If an inaccurate or potentially damaging message is sent, it’s only a matter of seconds before hundreds or thousands of people see it, share it and judge it. This could destroy your company’s reputation. There is also a risk of being hacked which could also lose tons of customers. The rewards, if handled right, can turn a good company into a great one. You have the courtesy of instant exposure. If something newsworthy happens, people know about it seconds later. There is also the reward of being able linking your Twitter page to your companies own website for direct service for a product. Twitter is a great PR tool which could create great success stories for large masses of people to view.

2. Twitter could follow along with the idea of upgrading their search engine for advertising uses. Whenever you search something in Google, the first couple of sites are ads. Twitter could use the same idea to generate more revenues. For example, if I searched for a gaming mouse, the first couple of tweets or links could be companies who have paid for the ad. This could be an individual tweet, pictures, or even a link to the Twitter page for the company.

Twitter Searches For A Business Model. (2016, Jun 01). Retrieved from http://studymoose.com/twitter-searches-for-a-business-model-essay 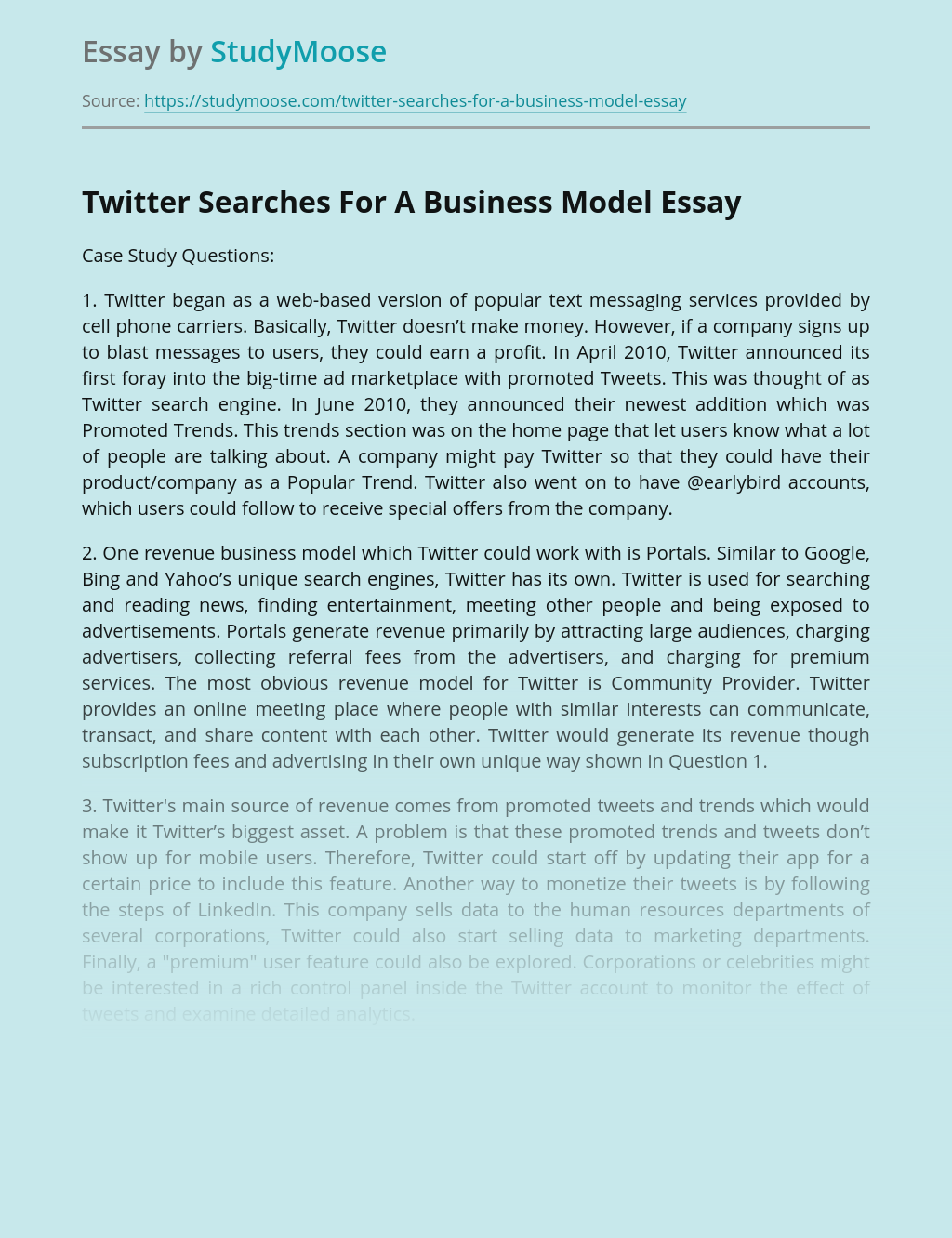 Turn in your highest-quality paper
Get a qualified writer to help you with
“ Twitter Searches For A Business Model ”
Get high-quality paper
Helping students since 2015
Stay Safe, Stay Original