Richard Frethorne wrote a letter about his life just three months after arriving in the colony. Richard Frethorne described about the severe hardships, he is facing in the new world, by writing to his mother and father. Frethorne’s heart-wrenching letter delivers an enlightening picture of the adversities of settlement, particularly for indentured servants. He told his parents that he was not happy at all, being so miserable, he miss them and his homeland at lot

Frethorne was one of these poor people who agreed to become a contract servant, not knowing that everything they were promised would not be fulfilled.

Frethorne left England in 1623 and Jamestown, Virginia, was his default location.

According to the letter he sent to his parents, Frethorne portrays the difficulties of the servants by contract in the early seventeenth century in Virginia. In his letter, Frethorne implores his parents for help. He is aware of the conditions in which he is exposed to live and feels that the end is near for him.

The letter serves as a cry for help, as well as a farewell letter if his death comes. Frethorne compares his life now and the life he had in England; in England he ate more in a day than in a week on the ship; his parents have more of a beggar in England than what he had now. In truth, even though poor whites suffered in England because of their poverty, being a contract servant was worse than poverty.

Two problems that have arisen regarding Frethorne’s letter to his parents are: complaints of unfulfilled promises made by elite Englishmen to hired servants and the second problem concerns servants hired as workers or slaves.

The elites promised the servants by contract three meals a day and, once the servitude was completed, they would be given a coat, shirt, pants, shoes and dirt; however, Frethorne’s letter represents the opposite. Servants were not given three meals a day, they were hardly given a good stable meal, and most of the food and water they gave the passengers made them sick. Gottlieb Mittelberger described the conditions in which the passengers lived: they only had a reduced space the ships carried around 600 people, the passengers were forced to waste their last provisions and money to stay alive, they died of hunger, trips lasted weeks, and salty food and blackened water made them sick.

The second question is whether contract servants are hired workers or slaves. The hired servants were treated as slaves; They were whipped, mistreated, sold and punished as slaves. However, hired servants were promised freedom after 5-7 years of full service, however, if a family member died, they would also have to serve their sentence. Slaves, on the other hand, were born slaves and remained as slaves, hired servants still had the possibility of being released. Erick Foner states that contract servants did not enjoy any freedom while they were under contract and Frethorne’s 1623 letter supports him even more.

At the beginning of the 17th century, more than two thirds of English settlers arrived in the United States as contract servants. This was the only way these poor English could come to the United States and start a new life. But very soon, these hired white servants began to tire of the exhausting work they had to do, so the masters now depended on African slaves to do the job. Both servants and slaves were treated very similarly.

Slaves and servants were brought to North America in very narrow spaces, starved, exploited and lied, and above all were abused! Frethorne’s letter to his parents exposes the true intentions behind the elites. They not only exploited these poor people because of their economic situation, but also deceived them by claiming that they will receive certain wings after their service is completed, however, they are broken promises.

Regardless of his color, the white servants hired were still treated as inferior as slaves; His poverty made them subordinate to the elites and, therefore, makes these poor white are more susceptible to the cruel intentions of the “rich”.

After these hired white servants completed the allotted time, they were free to leave and most of them became what was known as the working middle class in the seventeenth century. Although they were white, they were treated as inferior and no mercy was applied. Children suffered more, families faced each other, resentment existed in the corners of the ship and most died on board and were thrown into the sea without a proper burial ceremony. Contract servitude was almost similar to slavery and I think the only difference was that those white servants by contract were promised freedom at the end and were actually released. 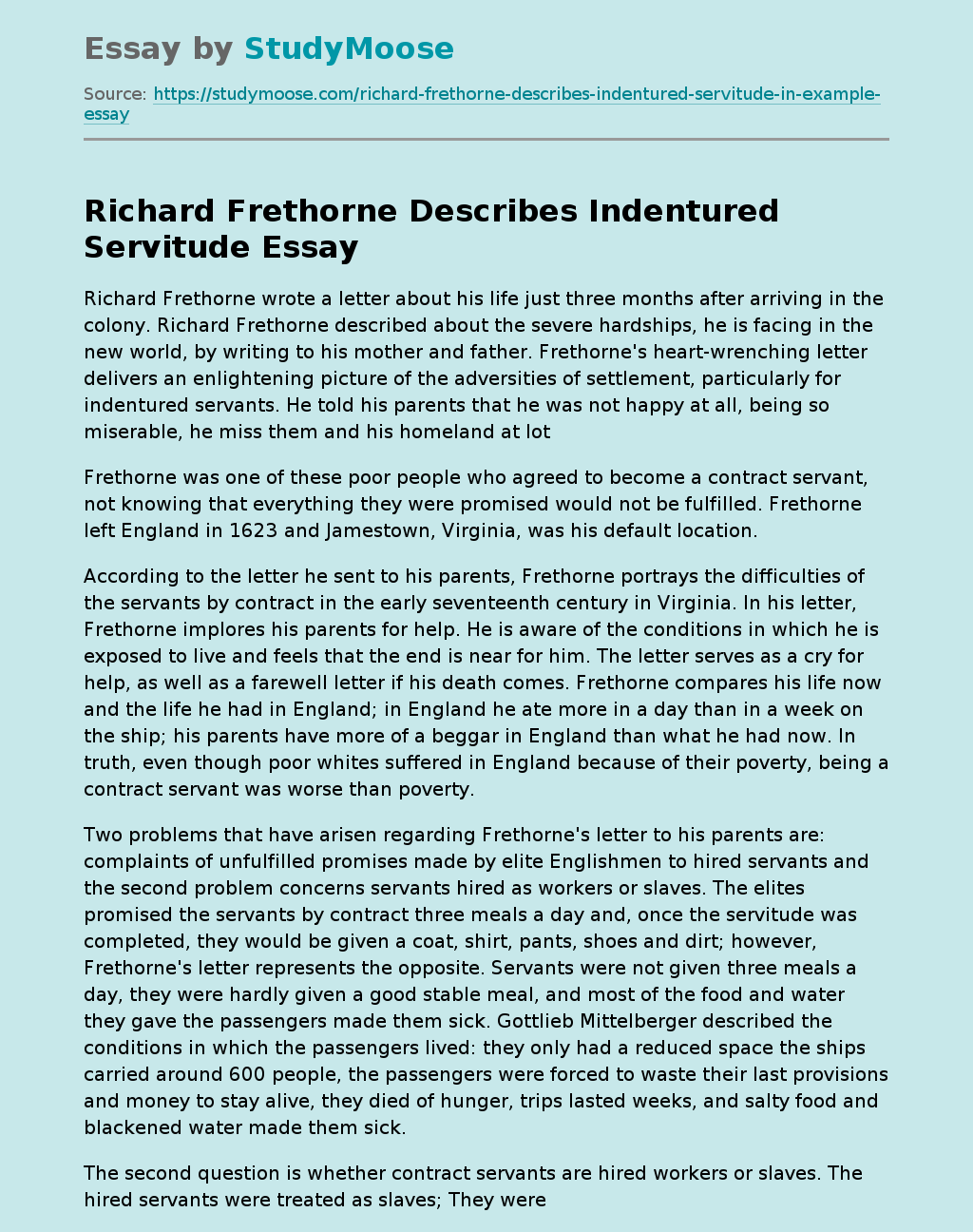