To be in Servitude is The state of Being a Slave

To be in servitude is the state of being a slave or completely subject to someone more powerful. Freedom is a condition of having liberty and control of your own actions without the fear and repercussions of confinement. Breaking down the themes of freedom, imprisonment, and its relationship in an authoritative use; we can connect these ideas with elements in Shakespeare’s The Tempest.

The Tempest was written in the early 17th century, a time period known to have a strengthened monarchy.

Don't use plagiarized sources. Get your custom essay on
“ To be in Servitude is The state of Being a Slave ”
Get custom paper
NEW! smart matching with writer

The inclusion and prevalence of these themes perhaps stemmed from Shakespeare’s own desire to highlight the monarchical form of government and period of protestant reformation, which shapes his fascination with the idea of imprisonment, freedom and authority – in both a literal and figurative sense.

In order to understand imprisonment, one must think about how authority plays a role within its confinement. There is the idea that Prospero considers himself to be more powerful than Ariel and Caliban. From the very start of the play, Prospero’s control sets the story into motion.

There is an emphasis placed on “control” as Ariel and Caliban weren’t hired or had voluntarily decided to work for Prospero – they were enslaved. “What Ariel! My industrious servant, Ariel!” (Act IV, scene I, line 33). In order for Ariel to claim freedom, he must obey Prospero and assist in piecing together his plan of revenge. Caliban, who was initially the “king” of the island, was dethroned by Prospero and forced into servitude. “This island’s mine, by Sycorax my mother…For I am all the subjects that you have, Which first was mine own king; and here you sty me, In this hard rock, whiles you do keep from me, the rest o’th island.

This idea is elaborated upon in Silvia Federici’s Caliban and the Witch when she speaks of the mirroring differences in the human partaking of the angel and the beast. Federici speaks of the contrast between angels and demons, which represent polarizing elements of the body. On one end there is prudence and a sense of self-responsibility, while on the other end of the spectrum there is lewdness and idleness. Prospero is represented as the “angel” as sees Caliban as a lowly “demon”. This is reinforced by the argument that Prospero and Caliban has early in the play when they banter between each other after Prospero commands Caliban to work. “Thou most lying slave, Whom stripes may move, not kindness! I have used thee, Filth as thou art, with human care, and lodged thee, In mine own cell, till thou didst seek to violate, The honour of my child.” (Act I, scene 2, line 496-500) To which Caliban responds “O ho, O ho! Would’t had been done! Thou didst prevent me; I had peopled else, This isle with Calibans.” (Act I, scene 2, line 501-503)

It would be a mistake the consider Prospero the sole controller of the play. The initial instance of authoritative imprisonment comes from the beginning of the play where the sailors were battling the storm. There is a transgression in the conventions of social hierarchy when the Boatswain challenges the authority of the king and his followers. “Do you not hear him? You mar our labour: keep your cabins: you do assist the storm.” (Act I, scene I, line 19-20) The lines spoken by the Boatswain give implication that the king’s authoritative powers were useless in their peril. It is with expertise in his trade where the Boatswain is to be seen as the absolute figure – the one with all the power. The idea of expertise in trade segways into Caliban’s position in the island which breaks the normalities of the convention once again. As a native to the island, Caliban had all the survival instincts and techniques to live on the island and he teaches that to Prospero when he first arrived on the island. “When thou cam’st first, Thou strok’st me and madest much of me, wouldst give me, Water with berries in ‘t.” (Act I, scene II, line 483-485) The belief in divine right is once again tested when this transgression returns during the closing act of the play in which the king asks Prospero for his forgiveness. “Thy dukedom I reign and do entreat, Thou pardon me my wrongs. But how should Prospero, Be living and be here?” (Act V, scene I, line 2151-2153)

Though Prospero and the king are both absolute figures, their authoritative prowess stem from different powers. In a Monarchical state, it is believed that the king is chosen through the power of divine right of kings; an idea that was prevalent in during the protestant period in which people believed the king was chosen by God. Prospero on the other hand rose to power through his devotion to magic. When Prospero is exiled from Naples by his own brother and robbed of his dukedom, he honed and strengthened his magic. Prospero gains power over everything on the island: spirits, weather, thoughts and actions. Prospero enslaves the spirit, Ariel, and island native, Caliban to do his bidding.

It is with this idea that king Alonso and Prospero are victims of imprisonment which juxtapose that of Ariel and Caliban. While Ariel and Caliban are victims of physical and literal imprisonment, Alonso and Prospero are imprisoned in a figurative sense by their own power. Alonso’s status as king holds no meaning on the sinking ship, to the harsh conditions of the island, and to the magical spells of Prospero. Alonso’s power is an artificial power fabricated by the status of a social hierarchy. When there is no society or order, his power – which is upheld by the people, holds no significance. He is a prisoner to his own power which has made him ignorant to the world. Opposite of Alonso, Prospero’s power is tangible and can exist without the presences of others. However, Prospero is also a slave to his own power. He has succumbed to his magic and it’s fueling his drive for revenge. Prospero lacks freedom because he is subjected to his own perception of justice.

Further implicating the idea that Prospero is a slave to his own magic, his step to freedom comes with his decision to forego magic. Throughout the play, many of Prospero’s actions were driven by his magical prowess and his control over Ariel. The theme of magic is engrained deeply into Prospero’s character, as if it was like shackles binding him down. There is a moment of realization for Prospero when he tries to right his wrongs and foregoes his magic as a means of reformation. The idea of him letting go of magic is symbolic as him breaking free of his shackles. Though he isn’t truly free, this starts his first steps towards his path of seeking redemption. He will always be a slave to his own past lest he foregoes revenge and seeks forgiveness.

Prospero’s moment of true freedom is presented in the play through the unusual nature of its epilogue. In the moment of conclusion, the actor remains on stage and stays in his role as Prospero. The conventions of a stage play are broken and the audience is brought into the play with Prospero. It is in the hands of the audience to decide what follows: to retain Prospero on the island or return him to Naples. The magic-less Prospero requests the audience grant him release much like how he has forgiven his enemies and set aside his revenge. “As you from crimes would pardoned be; Let your indulgence set me free.” (Act V, scene I, line 337-338) The term “indulgence” used in Prospero’s final line has a double connotation in its meaning. The audience themselves can be seen as the Catholic church during the protestant period. The church at the time was known for their teachings of indulgences, a method of paying for repentance – to buy away one’s sins. The once powerful Prospero has casted away his magic and is left in a bleak situation where he is perhaps under the mercy of some divine power. The church; audience, collects Prospero’s indulgences and through approval and applause for his performance, he is set free.

To be in Servitude is The state of Being a Slave. (2019, Nov 15). Retrieved from http://studymoose.com/to-be-in-servitude-is-the-state-of-being-a-slave-or-example-essay 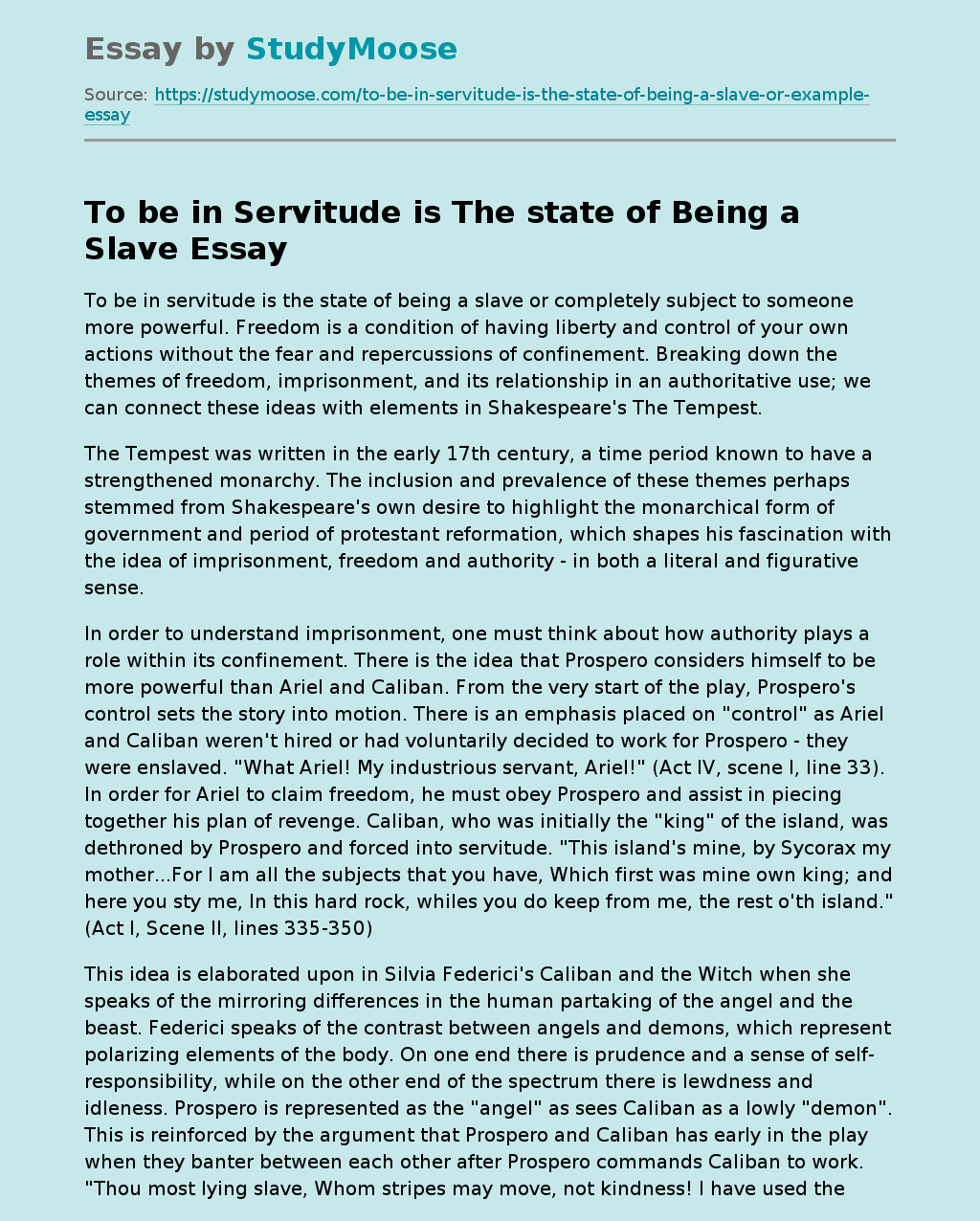