Starting with a critical outline of the global patterns and designs in communication, Anna Lowenhaupt Tsing’s seminal work Friction: An Ethnography of Global Connection attempts at a critical examination of the widespread principle of worldwide associations lingering almost everywhere. While Tsing explicates that her work “is not a history of philosophy but rather an ethnography of global connection (Tsing, 2004, p. 1)”, she also unravels a tight regard for the seemingly presented connections among the various sections of the society. Apparently, one of the book’s main concerns is to obtain the movement patterns wherein various types of knowledge and culture collide against or with each other.

Don't use plagiarized sources. Get your custom essay on
“ Reviewing Friction: An Ethnography of Global Connection ”
Get custom paper
NEW! smart matching with writer

This, perhaps, is the logical and obvious contention behind the book.

The initial section of Friction probes into the notion of ‘richness’ or prosperity through an examination of the numerous sides of capitalism. The first part also seeks an exploration of the events that lead to capitalism and its corresponding effects from a bigger viewpoint.

While putting down into understanding the significant concepts needed to have a better comprehension of the foundations and modern expressions of capitalism, the first part also brings into light quite a few matters surrounding the delicate and complicated ties from all over the globe. This section introduces the part where the Tsing will subsequently interlock the discussion about the worldwide political environment which encompasses the Indonesian society including the local communities.

Tsing’s seminal work also makes the plain observation that the population increase or boom has equally led to a rapid disproportion in the environment as resources would then have to be consumed or used in a larger scale or degree.

Because capitalism is one of the book’s primary concerns, it attempts to showcase the definitive function of capitalism in this imbalance which is largely amplified by the increase in population in the modern years.

Tsing further observes that proliferation is also a crucial principle that indicates the expansion or spread of capitalism (Tsing, 2004, p. 27). This results to the presumption that the population expansion—with the combination of capitalist expansion—is a measure of proliferation. In return, the proliferation generates the setting of frontiers which are not mere edges but more importantly specific forms of edges “where the expansive nature of extraction comes into its own (Tsing, 2004, p. 27).”

Generally, the opening parts of the book, including the first chapter, are initially segmented into two sections: the first section deals with the concept of frontier and the resources which consist it founded on the ethnographic observations during the middle parts of the 1990s; the second section probes the consequences of the predicaments during 1997 when “frontier-making spiraled out of control (Tsing, 2004, p. 28).”

The second main section of Friction explores the concept of Natural Universals with respect to the various contexts in the whole world. Friction inevitably draws the parallels between universality of a supreme being which is God and the universality of nature through the environment for generating the link between Nature and God. While the chapter probes into the “universality of capital-N Nature” which is the “awe-inspiring, lawlike systematicity of the cosmos of and of life on earth” (Tsing, 2004, p. 88), the book also inevitably draws the essential link between Nature and the rest of the world.

These observations discussed in the book brings us face to face with the core of what the author is presupposing: the idea that mere generalizations are just as they are without getting hold of the particulars that comprise them. If put altogether like a single unit, these very particularities will compose the bigger picture where the rest of Nature and of the world function as a unified force.

The second chapter further tries to ascertain the supposition that one can start to take action on the idea of ‘thinking globally’ through the awareness of a present generalization among things. That is, the realization of the commonality among the various elements and entities in the world through their predominant generalities helps us overcome the barriers that hinder us from thinking on a large scale and attain the end of global connections.

The author steadfastly formulates this position by affirming that “as long as facts are apples and oranges, one cannot generalize across them; one must first see them as ‘fruit’ to make general claims (Tsing, 2004, p. 89).” This makes the book even more mind rousing as it nears its middle part. As Friction exposes certain critical observations such as the inability or failure of individuals to realize the common general thread which holds people together as one, it also brings into consciousness the possible means of surmounting the test of realizing the more general claims.

In addition, Friction reiterates the idea that “cultural analysis thrives on the description of specificity” given that it is the paramount scheme for us to get hold of “a critical distance from the common-sense platitudes and everyday assumptions of our lives” and “the powerful ideologies that keep us in their thrall” (Tsing, 2004, p. 122). Friction reasserts the position that omitting the comprehension about the particulars disarms one with the capacity to approach and comprehend the more evident actuality in the rear of our common-sense perception of the globe.

“Nature Loving” further makes manifest as well as supports the belief that the assorted interactions concerning different categories of knowledge and culture are unyielding factors in investigating universal claims. Using the Indonesian rainforest as an example, the book reiterates the belief that people have always been in contact with nature. One example to this is the fact that there are ‘nature lovers’ who are “devoted to outdoor activities such as camping, mountain climbing, rafting, and scuba diving (Tsing, 2004, p. 122)”. These individuals merely consist of a little fraction of the bigger populace whose daily lives involve contact with Nature such as the Indonesians.

Friction penetrates deep into the analysis by putting side by side the observations of the poet Kristiandi Tanumihardja with the observations of individuals from the scientific community to the masses. The cornerstone of these observations from the book relates the idea that nature has its own way of communication which is evidently unique in its own mysterious ways. As Friction talks about the human endeavors to disclose the mysteries behind the way Nature communicates not only by the scientific community but also by the world of literature, it also hopes that “even with such limited understanding” the attempts “might bring us closer to knowing how to live in a multispecies world” (Tsing, 2004, p. 172).

Friction further concretizes an observation in the chapter “A History of Weediness” where the author explores “the interdependence of species” by reflecting on “the beasts and flowers, not just as symbols and resources, but as co-residents and collaborators” (Tsing, 2004, p. 172). This corresponds to the presumption that there should be ‘respect’ in the manner which human beings deal with the environment. The book reveals the outlines upon which the societies have significantly transformed—and, to a certain extent, revolutionized—across generations which largely contributed to the major changes in Nature.

More importantly, Friction tries to reveal the assessment that Nature and the cultural processes have been normally delegated with various disjunctions and differences as well as with the heterogeneous factors which intertwine along the way—it is the part in which people ordinarily refer to as the concept of ‘globalization’.

The final chapter “Freedom” in Friction commences with the belief that “travel changes the way we imagine our home places (Tsing, 2004, p. 213)” which leads us towards the idea that ‘movement’ should be present for us to acquire a consistent and unyielding comprehension and appreciation of Nature and the global environment. It is only through this movement can a broader understanding of the global connections existing take place. More importantly, these movements are paramount or equivalent to the different social movements and upheavals in more recent times. These include the various social movements among the community of civilians consistently engaging with the environment.

Friction’s final chapter further broadens the kinds of collaborations where “political gains and compromises” can be assessed “through constant attention to these kinds of collaborations and their effects” (Tsing, 2004, p. 268). While aggregating the general contentions of Friction in studying global interconnections and the many particularities involved in comprising the larger whole, the book also places a special emphasis on Indonesia’s environmental status. Friction reports facts about the principal subject matters in investigating the ethnography of global connections and the findings by earlier generations as well as the contemporary ones which ascertain what people comprehend as signs of globalization. 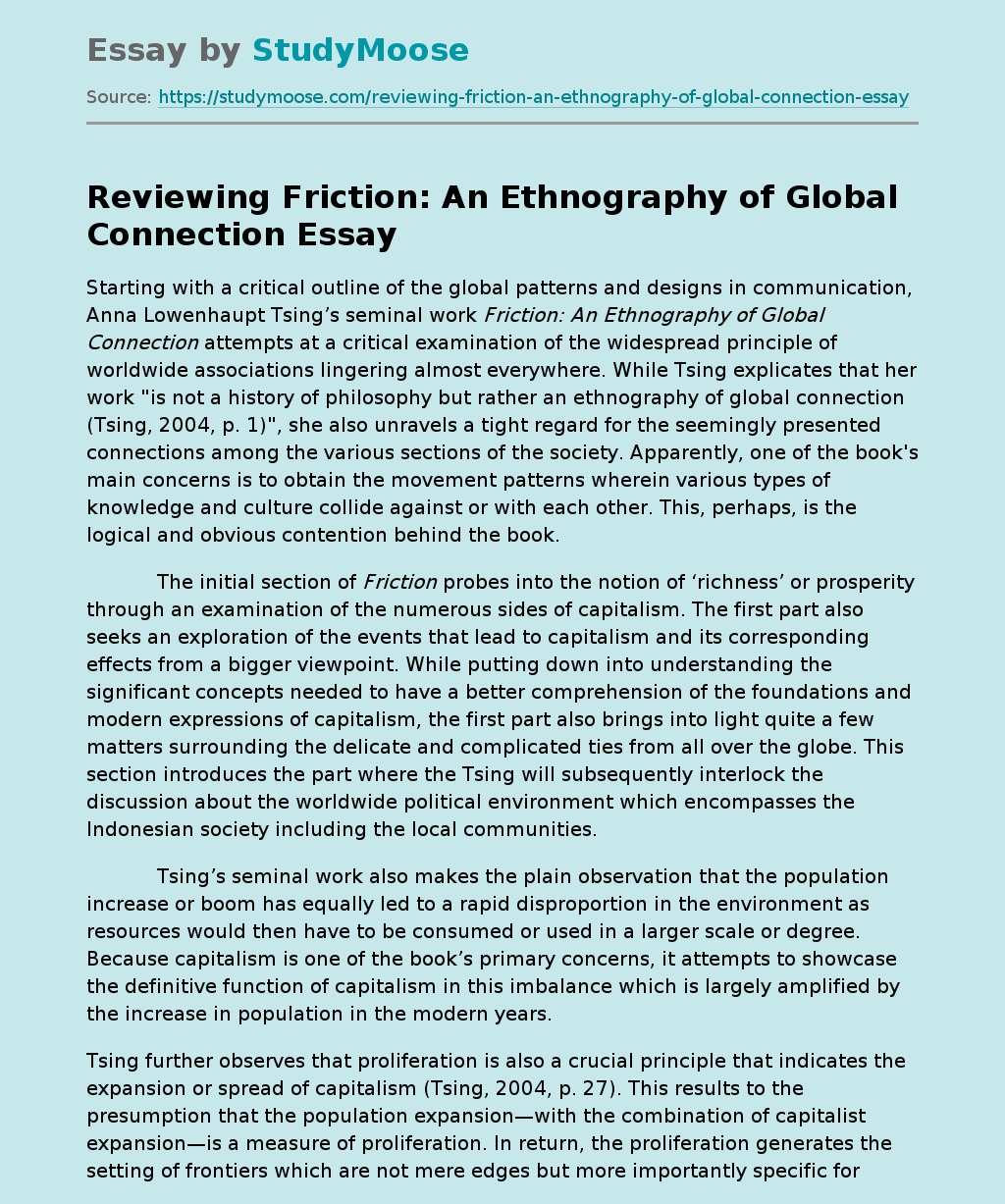