From the essay ‘What You Eat is Your Business’ by Radley Balko, he shows a strong opinion of what should be public knowledge and what should stay private. His determination on obesity not being public health makes people rethink what obesity is, the government’s part in it, and how to go about fixing it. Though Balko isn’t the only author with a strong belief on this subject, he stands out because of the way he captured the reader’s attention.

Don't use plagiarized sources. Get your custom essay on
“ Response Paper to ‘What You Eat is Your Business’ By Radley Balko ”
Get custom paper
NEW! smart matching with writer

He does this by challenging what people today believe is just common knowledge. Balko uses logos by giving the title for a TV special where policy makers, health specialists, and media are involved. Balko also mentions numerous senators and the president that also contributed to the cause of stopping obesity. By using logos and then stating ‘In other words, bringing government between you and your waistline’ it brings in the use of pathos.

Instead of encouraging the use of many influential people on this problem, Balko does the opposite.

It does work in bringing out emotions by causing people to think. When people think about this, they will either agree that government should be involved or they will lean towards Balko and think that obesity is a personal matter. Either way, the audience is likely to get upset with how the government is getting too nosey or how Balko makes them the enemy. The audience is more likely to lean towards what Balko is stating because of his bias opinion on the matter.

The way he captures the audience is by bringing independence into his words: ‘For decades now, America’s health care system has been migrating toward socialism. Your well-being, shape, and condition have increasingly been deemed matters of “public health,” instead of matters of personal responsibility’.

These sentences make people react because America is based off of independence; and if the audience starts to believe that their control of their own lives are slipping away, then they will fight against it. Though Balko does do a great job in getting people’s attention and making them lean closer to his side, he is bias. Balko enlarges the evils of public health, to where he doesn’t mention the positive sides of it. If he did mention how having public health has worked in at least one way, then what he states about the wrongs of it would have more logic and reason.

People without a bias opinion on the matter look at both sides and weigh the pros and cons. So if he included something good about public health care then he would be more creditable for his essay. Balko’s essay is very interesting and motivating. From his writing, his best quality is capturing the audience’s attention. He captures the audience with his whole essay and keeps them reading by his opinion on the matter. To be a writer people believe that you need to have passion for what you write, and Balko certainly does.

Response Paper to 'What You Eat is Your Business' By Radley Balko. (2016, Apr 22). Retrieved from https://studymoose.com/response-paper-to-what-you-eat-is-your-business-by-radley-balko-essay 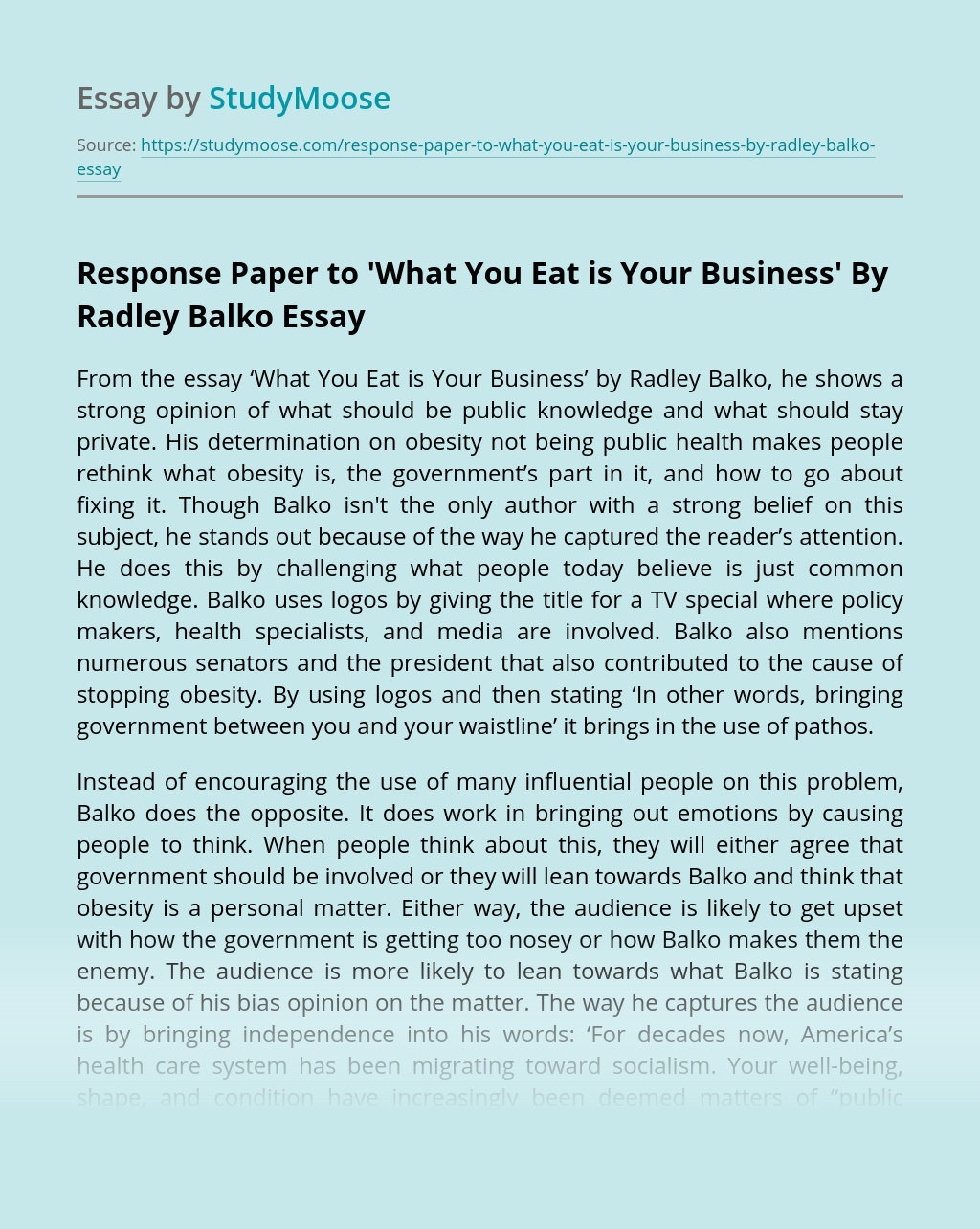