Globalization is the process by which different societies and cultures integrate through a worldwide network of political ideas through transportation, communication, and trade. Generally, globalization has affected many nations in various ways; economically, politically, and socially. It is a term that refers to the fast integration and interdependence of various nations, which shapes the world affairs on a global level. Simply put; globalization is the world coming together. In this essay I will discuss multiple perspectives on globalization through the analysis of these three sources.

Don't use plagiarized sources. Get your custom essay on
“ Globalization Source Analysis ”
Get custom paper
NEW! smart matching with writer

Source I’s perspective is the view that through globalization; many cultures are destroyed and that this diminishes society. This source outlines a disadvantage of globalization and views it as a negative force. This can be interpreted by the examining the quote given; Octavio Paz is referring to the homogenization of culture (the blending of different cultures in such a way that the end result is one mixed culture). As globalization occurs; the inevitable result is that cultures will have to compete for dominance.

Many cultures will end up losing to the dominant global culture and this will lead to the extinction of some traditional ways of life. As result we are all becoming more like one another and in this way culture dies.

Source II’s perspective is the view that the English language is dominating French through globalization. The source is displaying a negative consequence of globalization. This can be interpreted by examining the political cartoon literally; English is trying to crush French with a globe.

As globalization occurs; dominant global languages will easily over power other minority languages. The source may feel this way because of what’s happening in modern day Canada. Despite being a bilingual country, the vast majority of Canadians speak English as their first language. This is a result of globalization, English has, for a variety of reasons become the language of business and of the internet and is therefore favoured. French language in Canada is therefore the minority and is “dominated” by English.

Source III’s perspective is the view that because of globalization, specifically Americanization (to absorb or assimilate into American culture), transnational corporations (any corporation that is registered and operates in more than one country at a time) have become a dominant part of global culture. This source describes this as a negative consequence of globalization. The heading “Problems of Globalization”, clearly shows that the source is trying to convey a negative aspect of globalization. This can be interpreted by examining the political cartoon; the family of three each talks about the different places they’ve been and yet they have all purchased merchandise from American companies. This is possible through the fact that American transnationals have spread all across the globe and have taken up monopolies (the exclusive possession or control of the supply or trade in a commodity or service) on certain industries. This source probably feels this way because of the basic principle of economies of scale (the cost advantage that arises with increased output of a product). As a transnational becomes larger it expands to different countries and the local small businesses stand no chance of competing with wealthy transnational corporations. In this way, business is crushed and transnationals become a staple of global culture.

The three perspectives on globalization that I have discussed so far each have some things in common. Each source describes ways in which globalization affects the world and society. Each source also shows the negatives effects of globalization; namely the lack of diversity and culture that is a result of globalization. From each source you can see how globalization forces us to become more like one another by integrating us into a singular culture. Sources I, II and III are all great examples of how culture spreads to different parts of the world and how the world responds to that kind of cultural interchange.

In this essay I discussed three different perspectives on globalization each showing a different side to how globalization affects the world. Like everything else, globalization has its advantages and disadvantages. Whether we embrace it or not, the fact is that globalization is inevitable. The world is coming together and with that we are all becoming more alike in the way that we speak, the way we dress, and our culture in general. 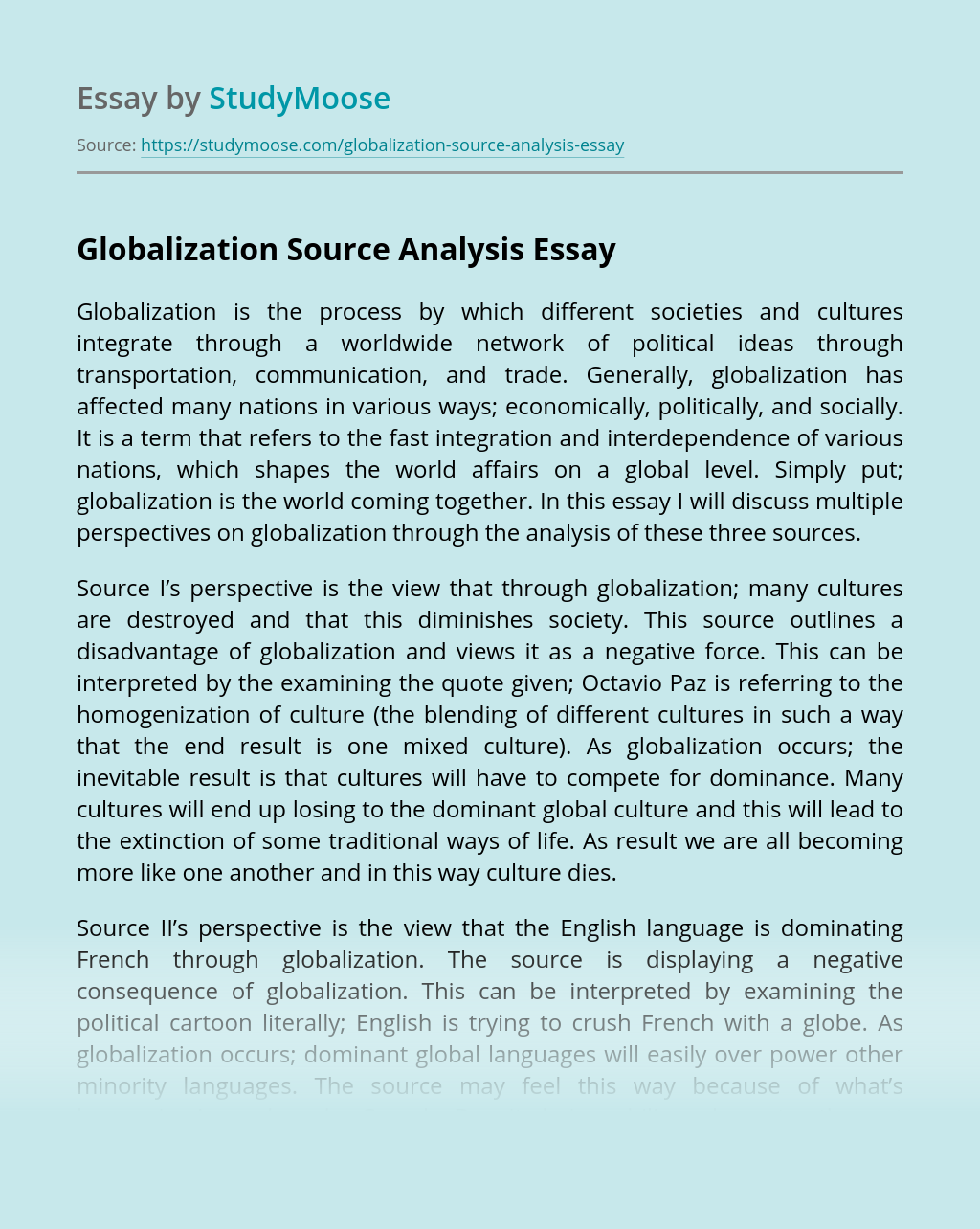