It is important to respond to conflict that does not disrupt the work of the playworker team, as this shows professionalism and the proficiency of the workforce. It helps the children and young people feel comfortable in the setting, when parents and practitioners have a good relationship, and they are able to see that relationship for themselves. This in turn will aid a good support network for the betterment of the child or young person.

As much as we would like to be, we are not super-human, and we all suffer stress at sometime in our lives.

Don't use plagiarized sources. Get your custom essay on
“ Respond to conflict ”
Get custom paper
NEW! smart matching with writer

Whether through bereavement, divorce or the workload is just too much for us to cope. This is when we need to accept help, and put our hands up and ask for support, before we inevitably ‘breakdown’ and do something that we may regret later. Being a good listener is one way to help ones colleagues, to find out what is the problem, and showing empathy depending on the situation.

If the person is finding their workload too overwhelming, then one can offer to ‘lend a helping hand’ so that they will become less stressed. ‘Many hands make light work’ after all!

Sometimes opinions conflict, and this can lead to bad feeling. (ie ‘My way is better than yours’ syndrome). A compromise needs to be reached, otherwise being at loggerheads with each other will not benefit the children or young people in the setting. You can still agree to disagree as long as a compromise is reached to be able to carry on ones role to provide a professional service.

Miscommunication has a tendency to cause misunderstanding in the work place, and this needs to be resolved by making all parties aware of where the breakdown in communications happened. The one at fault should always be willing to ‘put their hands up’ and apologize for the misunderstanding, as more often than not this is a human error, that we all have succumbed to in life. (Any one who says different·.?! Uum!). As long as the person is genuinely apologetic, then the setting can get back to normal without any nit-picking and nasty innuendo and ‘backstabbing’, from other members of the work force. A written report could be advisable in certain cases, pending on the severity of the incident.

Sometimes certain members of staff will try to have ‘one up-manship’ on another, and may try to gossip about that colleague to others in the work place. There are two ways of dealing with this scenario.

1. Ignore the ‘back-stabbing remarks of the colleague in question, and let him/her diffuse their rant themselves. If others do not take notice, and do not comment they will have no ’embers’ to ‘fuel the fire’ further.

2. They can be reported for professional misconduct, towards another member of staff, to the line manager.

In my setting I have had to deal with different forms of conflict at various times in my professional capacity.

My line manager was approached by a parent, who accused me of confiscating a snack from a child during break. The child in question had actually eaten, or for a better description gorged, on the snacks and, knowing that she would have made herself ill, because of it, I had removed the 3rd snack, for her to have later on that day. Unfortunately I had forgotten to give her back the chocolate bar. I apologized to the head, and told him why I had done the ‘dirty deed’ and made sure that she had the snack back the next day. The reason was later conveyed back to the parent in question.

1. She knew that it was not in my character to be so, and 2. The staff member in question was ‘definitely over reacting’ to ‘her situation’. (The supervisors words, not mine). Also the girl in question had been making remarks on Facebook during the after school club session, in a different room at the time, leaving me to deal with the children by myself. (Something that came to light the day after the grievance! oops!….Freudian slip, me thinks!). Now who’s not professional?!

The problem was diffused by not fuelling her ego, by reacting to the situation, and I ‘carried on regardless’. No more was mentioned, and I continued to treat her in the professional capacity, that was deemed and expected by the setting. (Rant over!!)

*Can be edited accordingly, at your discretion, if not acceptable answer!*

In my setting a year 4 child refused to stay on time out and answered me back constantly. As his attitude became more erratic, I had to call the class teacher to deal with his behavior. I explained what he had done (ie thrown another child across a table in breakfast club). He accused me of lying, the teacher asked him to apologise, which he blatantly refused. He was taken to class to keep away from the other children, to give him a ‘cooling off’ period before the other pupils would come into the morning session.

If all practitioners work together in the setting, this will lead to a team ethos that will have openness, achieving better relationships in the workplace, which, in turn , will have a positive impact on the setting and will aid improved professional practice. 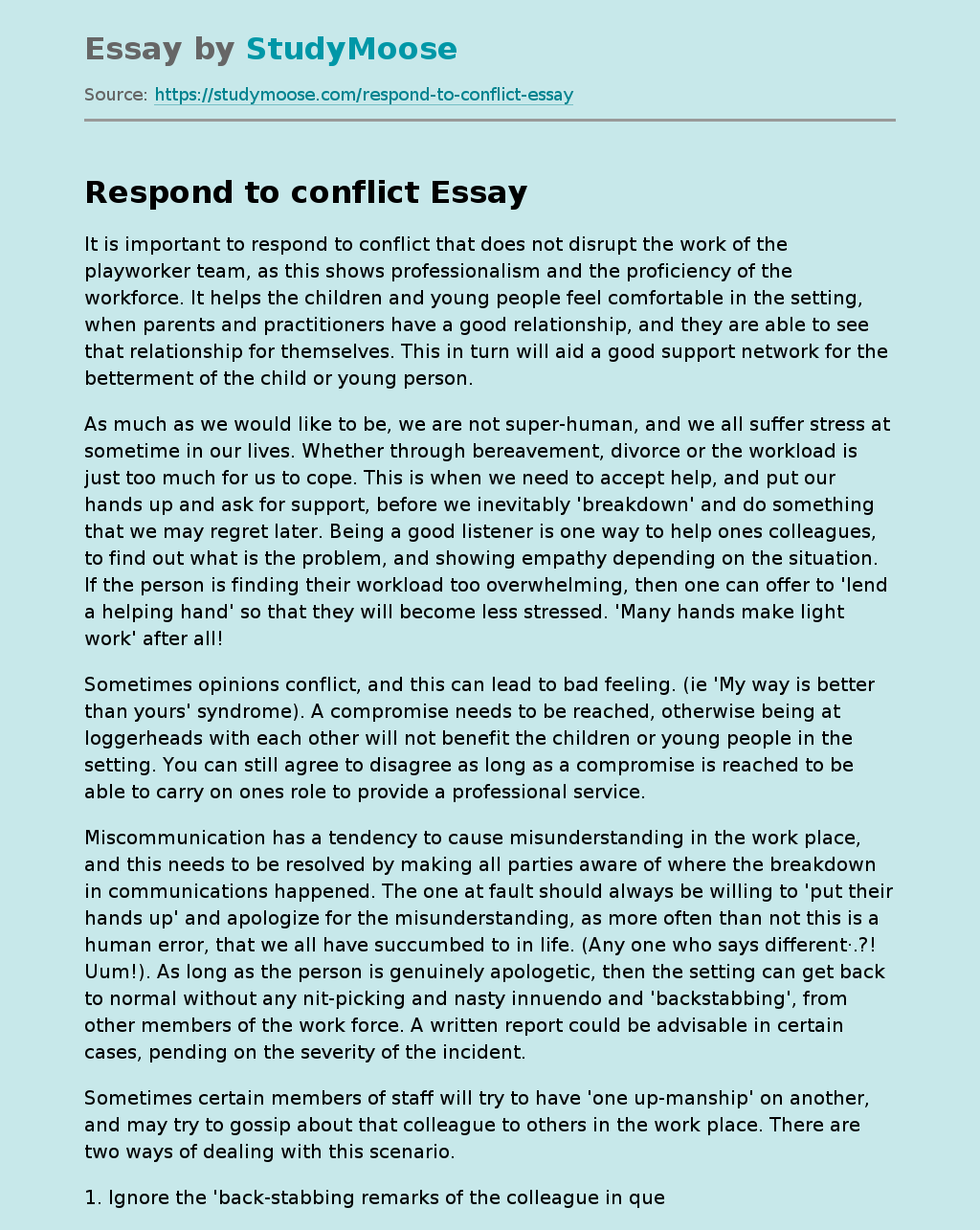