Reliability and validity in qualitative methods

Before discussing the questions it seems fitting to give a brief account of the wider debate between quantitative and qualitative methods.

Don't use plagiarized sources. Get your custom essay on
“ Reliability and validity in qualitative methods ”
Get custom paper
NEW! smart matching with writer

It is apparent – just by reading research articles – most researchers seem to fit into the quantitative or qualitative side of the debate.

The debate is often more about getting researchers to convert to one side or the other not about finding an equal balance. It is somewhat similar to a pendulum swinging back and forth but hardly ever resting in the middle.

In order to begin to answer this question it is useful to try and decide if each entity is as significant as the other? It is hard to discover which entity is more important – if any – in qualitative methods if we do not know how they stand against each other. In order to accomplish this both reliability and validity will be discussed separately. Both terms are often placed together but they are both to be found in research for different reasons. “Validity is testing to ensure that an instrument measures what it purports to” (Enock, 2002 p1) whereas “reliability refers to the consistency or stability” (Davis & Rose, 2000 p48) of an instrument.

Both would appear – even by common sense – to be equally significant in qualitative research. After all a researcher does not want to replicate a piece of research that is supposed to evaluate causes of stress if it actually evaluates causes of disease. Also there is no point in research possessing validity if replication is not promising. So even though reliability and validity are different they are like the air that we breathe and the lungs we breathe with. What use is one without the other? This shows that both entities are well-suited to each other which must be good for qualitative research.

If one entity was less important than the other researchers might tend to focus on the entity of greater significance and neglect the entity of less significance. This would then affect the strength of a piece of research. If they were not well-suited then surely they would not be of much help to qualitative methods.

Another way of assessing the significance of reliability and validity is to ask what would happen if they were not part of qualitative methods? According to Silverman

(2000 p175) “short of reliable methods and valid conclusions, research descends into bedlam where the only battles that are won are by those who shout the loudest”. People may decide not to participate in research if reliability and validity were rejected as they would be likely to loose faith in research studies. They may not want to spend time filling out forms or taking part in interviews if they do not believe in the credibility of the research. People may feel that if the research is not credible then “dissemination of research findings” is not likely. This “includes presentation at key meetings and conferences, and publication in sources likely to be accessed by the targeted audience” (Bowling, 2002 p159)

There are many threats to the reliability and validity of an investigation apart from the design (Bowling, 2002 p153). If reliability and validity were both one hundred percent effective then there would be nothing to debate about in the first place. (Bowling 2002 p153- 156) presents a list of errors that may occur including; acquiescence response set, assumption, bias in handling outliers, evaluation apprehension, interviewer bias, measurement decay, mood bias, non-response bias, reporting bias, selection bias and systematic error. An explanation of these terms is not necessary in this report, they are there purely to demonstrate the many things that qualitative researchers need to consider in their research. However as long as researchers are aware and make allowances for these possible errors they should not pose a significant threat.

Methods for minimising these errors have been created and put to valuable use. These include “triangulation (which) refers to the use of multiple researchers, research methods, sources, or theories in order to assess the consistency of findings” (Madill, Jordan & Shirley 2000 p3). Although, there are concerns that triangulation “may simply provide more information for the researcher to deal with (Grbich, 1990 p63)

However if all areas of reliability and validity were perfect there would be no room for progression or growth. Does it not seem ironic that progression and growth are the basis of psychology? Think about all the adverts on the television. Often a product will claim that ‘there is nothing better!’ Only a few months down the line the same company release an upgrade of the product which is ‘even better than the last!’ It has progressed just like methods of reliability and validity should be allowed to do without too much scrutiny. The most common test to measure reliability is that of “test-retest (which) measures the stability of responses over time typically in same group of respondents” (Litwin, 1995 p30). These and other methods help to increase the prestige of a research paper.

It then appears researchers can take every realistic step to try and ensure the validity of their research. However this may not always be enough. For example if the researcher were to conduct an interview or focus group to find out about people’s drinking habits they may not receive truthful answers. “Respondents may be motivated to lie (as) they may dislike or distrust researcher (or) they may be too embarrassed to tell the truth” (Breakwell, 2000 p247). So, how can researchers be sure that they receive valid answers? The simple answer is “there is no absolute way of verifying what someone tells you about their thoughts and feelings” (Denscombe, 1998 p132).

Surely qualitative research is required to be kept in check by validity and reliability? After all would it really be worthwhile to waste precious time reading a piece of research if there had been little control taken to minimise errors? If the reader is not “convinced that the researcher has accessed and accurately represented the social world under study” (Grbich, 1999 p59) surely they would opt for a piece of research they deem to be of greater validity. The same applies to reliability in qualitative methods. If research is not presented in a “coherent, complete and meticulously checked” (Grbich, 1999 p59) manner it seems it would be wise to reject the piece. If these methods of reliability and ecological validity were not used then qualitative methods may lose the little esteem they have built up. Therefore it would seem that reliability and validity are the structure in qualitative methods and highly significant.

In conclusion it would appear that reliability and validity are not just a significant part of qualitative research but are the most significance. If they were not a part of research then qualitative methods would most likely loose their standing in psychology and not be taken seriously. This report concluded that reliability and validity are of equal importance in qualitative methods. However this does not show that both entities are significant in qualitative methods just that they play a significant part in each other. Although, it does show – to some point – that they are well suited too each other. As discussed if one entity was of less importance then it may not receive enough attention and therefore affect the stability of a research piece.

As shown there are many problems of not having reliability and validity in research but they can also be threatened while in use through errors. The problems of not using these entities are much greater than the problems that they create. At least researchers can try to minimise errors. However if reliability and validity were not used then how could any piece of work be taken seriously? According to Hayes (1997 p2) Qualitative approaches are becoming increasingly accepted as a valuable part of modern psychology”) and this would appear to be because of the use of reliability and validity. Therefore they should be thought of as the most significant part of qualitative methods as without them would qualitative research would “descend into bedlam” Silverman 2000 p175)

Reliability and validity in qualitative methods. (2020, Jun 02). Retrieved from https://studymoose.com/research-methods-psychology-10423-new-essay 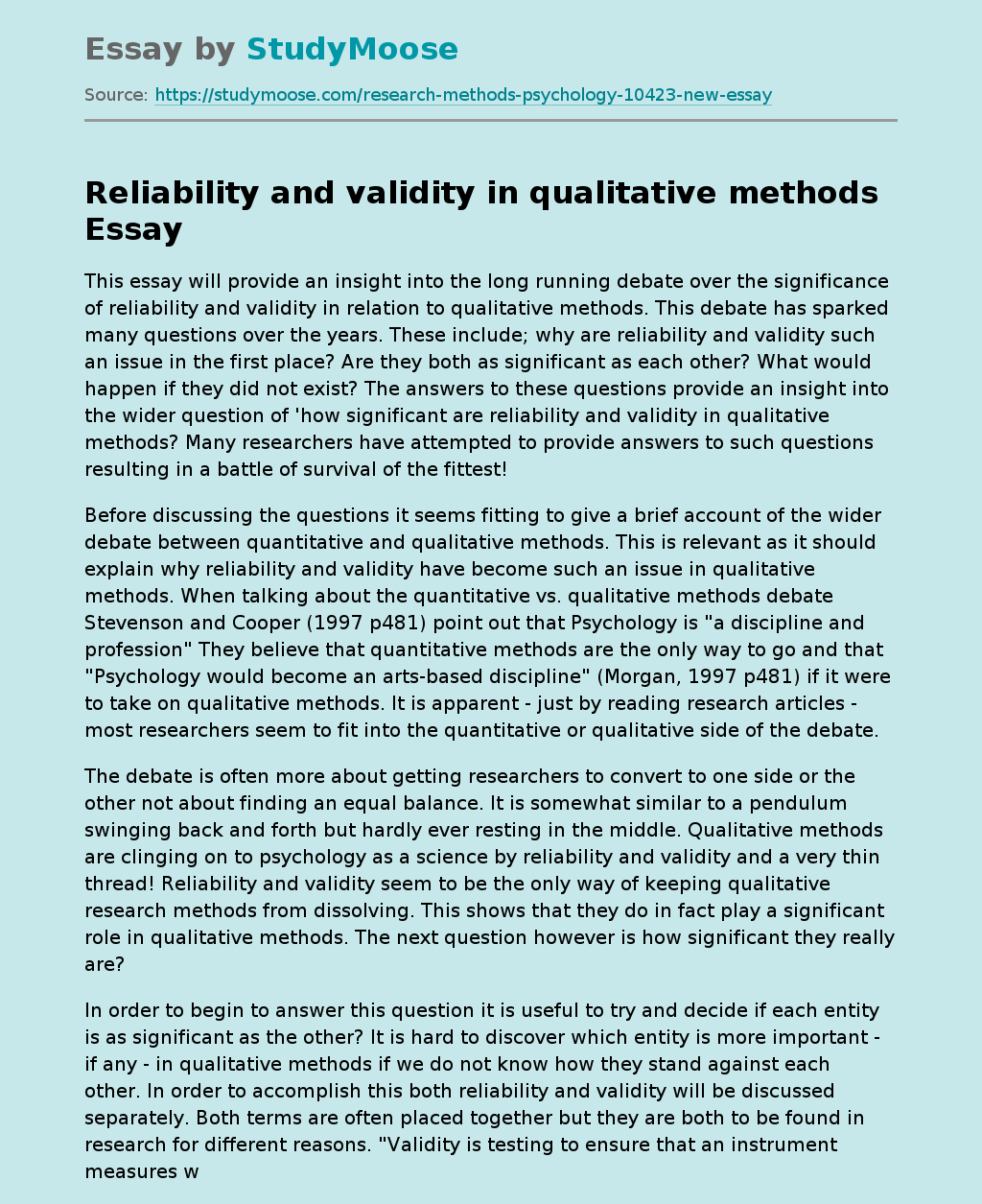