Remind yourself of Rhapsody on a Windy Night and discuss

In this poem Eliot looks at the darker side of a city and of life. He does this by setting the story line at night. This adds to the effect of indifference as everything’s is distorted and disfigured at night which makes them seem unnatural. We as a reader also relate darkness to depression and Eliot explores the use of imagery to suggest a bad life through the quality of the street. We as a reader and those who have a basic knowledge of Eliot’s life can come up with the suggestion that this poem is based on a chapter of his life and the way he sees everything around based on his quality of life at a particular time.

Don't use plagiarized sources. Get your custom essay on
“ Remind yourself of Rhapsody on a Windy Night and discuss ”
Get custom paper
NEW! smart matching with writer

He also uses imagery to show the reader the quality of the street, this helps the reader to understand how horrible this street really is and help them to feel the darker and more upsetting side of the street and then relate it to life towards the ending chapters.

The basics of this poem is not only the journey home and the quality of life that the street in which he walks holds, but also about the idea that Laforgue had of images triggering of memories. Eliot uses images and creates memories out of them so that the character is walking through his memories before he gets to his house which shows that he has a routine life and that it seems to be empty, unfulfilling and meaningless.

Eliot uses an everyday object such as a clock to show the ticking off of the hours as the story continues.

He begins some of the paragraphs with the time to show its passing as the poem continues. It seems to go slowly as not a lot happens between each of the different times and there is only about an hour’s difference between the previous one. The passing of the time suggests that the quality of life is so low that the best way to pass time is to wonder around the streets as the quality of life is so bad.

As in Preludes, Eliot shows loads of details in his use of imagery to create sight, sound and smell. He uses references such as “A twisted branch upon the beach” to show imagery and create a picture in the readers mind. “That smell of dust and eau de cologne,” to create an idea of the local smells and the repetition of the onomatopoeic effects from the line “The street lamp sputters, the street lamp mutters” to create the imagery of sound. Their isn’t a lot of imagery which suggests sound which makes the night seem quite and peaceful.

In both “Preludes” and “Rhapsody on a Windy Night” there is reference to spiritual and mysterious surroundings. In “Rhapsody on a Windy Night” this makes the poem more peaceful and relaxing for the reader as we wonder around the street watching the time fly by. Eliot gives us imagery such as “a twisted branch upon the beach” and “a broken spring in a factory yard” these images are not used to make the street look horrible and down class the quality of life but they maintain the idea of them being useless, rubbish and unwanted which is the sense of feeling that Eliot is trying to convince the reader to feel for this character, that he is useless, rubbish and unwanted.

In this poem women are sexually portrayed and we are aware of this through Eliot’s description of a prostitute who lingers under a street light. Eliot makes her sexual occupation seem repulsive through lines such as “hesitates towards to in the light of the door which opens like a grin.” This line represents the temptation of the prostitute to the reader and makes her seem more repulsive as it seems that she is pressuring sex to unsuspecting victims. Later on in the poem Eliot gives reference to the Moon and identifies it with qualities of a prostitute through the use of lines such as “She winks a feeble eye,” and “She smiles into corners.” This adds to the effect of a low quality of life as prostitutes are not a sign of a good thing and they are down cast by the public.

Eliot ends the poem describing the house in which the character lives. Eliot uses lines such as “put your shoes at the door, sleep, prepare for life” which suggests that his life is like a routine and that it isn’t adventurous and that it is always the same. Eliot also uses lines such as “the bed is open; the tooth-brush hangs on the wall” which makes the house seem comforting because of the mention of everyday objects that we as readers associate with everyday life and our personal possessions.

The very last line that Eliot uses “The last twist of the knife” is ironic as it asks the question is there life before death? This is ironic because as readers we know that there is life before death because we are living it but Eliot leaves the Reader to wonder if this is true because is it really worth calling it life if you just going to live in a repeat of everyday.

Remind yourself of Rhapsody on a Windy Night and discuss. (2020, Jun 02). Retrieved from http://studymoose.com/remind-rhapsody-windy-night-discuss-3900-new-essay 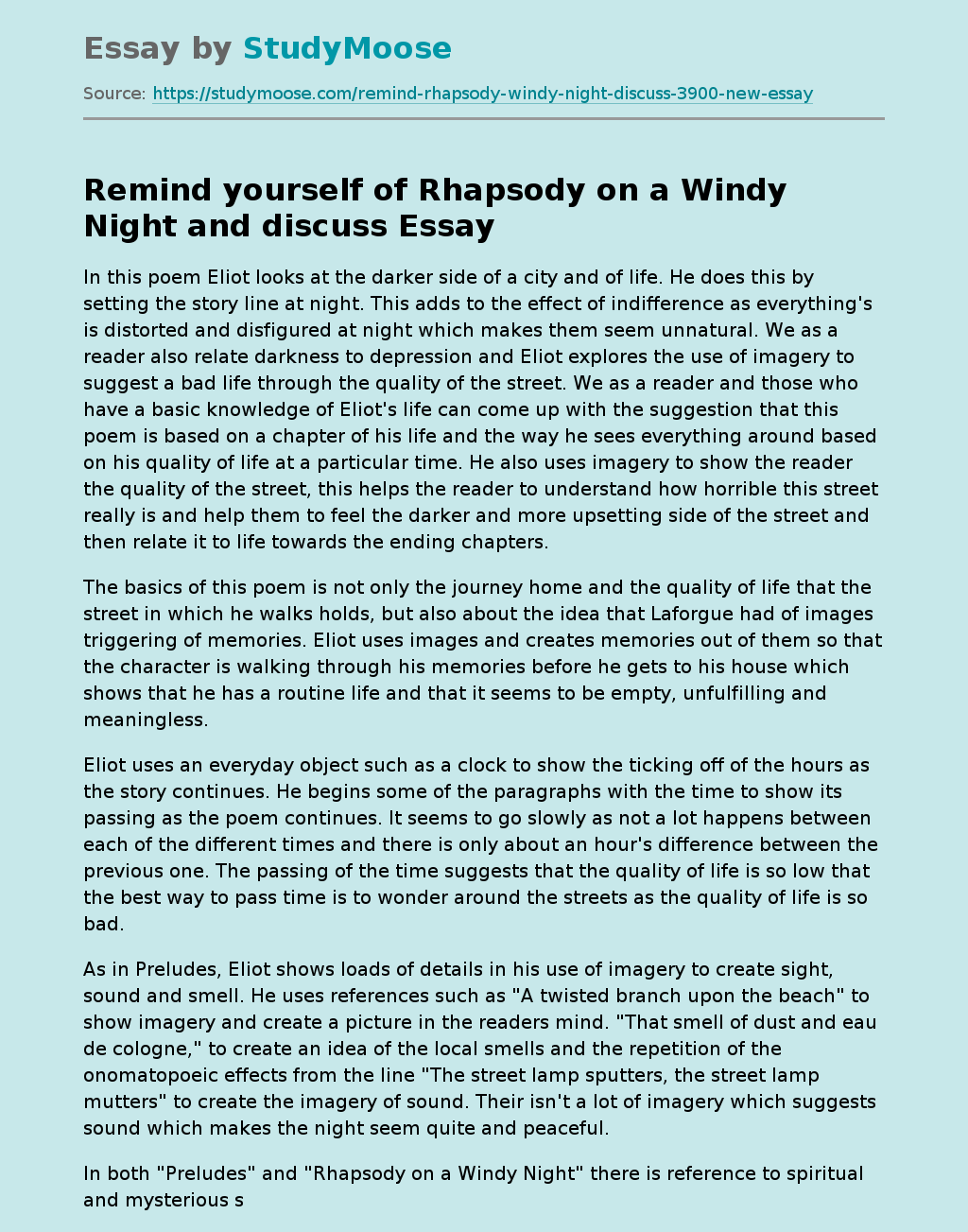