Religion in Ancient China and Egypt

Religion has played a very important role in society and the history of mankind for over thousands of years. Originally created by ancient peoples as a way to explain the unknown, religion has greatly evolved and spread across the globe. As new religions have formed and spread, the diversity and similarities between these new religions have also increased, especially due to their geographic locations. Two civilizations in particular with both similar and distinct religions are ancient China, and ancient Egypt. Ancient Chinese religion and ancient Egyptian religion share many things in common with each other, yet at the same time they are also vastly from one another.

Even though there are similarities between many of their gods, beliefs, ideas, and practices, the differences between the two religions helps clearly separate one from the other, and also helps identify their origins.

In ancient Egypt, people were constantly faced against natural disasters, famines, droughts, and plenty of other natural phenomena. Without an explanation for all of these events, ancient Egyptians had to create an explanation of their own, and by doing so ended up creating their own religion.

By creating a religion, these ancient Egyptians were able to provide explanations to each other for these natural phenomena by making them appear as if they were actions of the gods. In ancient Egypt, religion became a tool to help the Egyptians go about their daily lives without having to worry about disaster striking all the time. The Egyptians began to believe that if they honored the gods correctly everything would be fine and nothing would go badly for them.

One key part of the ancient religion was called maat, which was the order of the universe created by the gods at the start of time. Maat was crucial to the daily life of the Egyptians, and consisted of ideas about truth, justice, and moderation.

The Egyptians were polytheistic, and believed in hundreds of different gods. Of these gods some were lesser and not as important while others were more important and powerful. The king of the Egyptian gods was called Amen-Re. He was accredited for all military victories, and was one of the most powerful gods. Another very important god in ancient Egyptian religion was Aten the minor sun god. At one point Aten was decreed the only god in Egypt by the pharaoh Akenhaten and was to be the only god worshipped, however, after his death Egypt returned to worshipping all of its old gods. A few other gods that were important to Egyptian religion were Osiris; the god of fertility and the underworld, Isis; the goddess of funerals, Anubis; the god of embalming and burial, and Thoth; the god of wisdom and learning. Along with gods, another important part of ancient Egyptian religion was burial rituals. Burial rituals held a lot of significance to the ancient Egyptians because they believed that their buildings, prayers, and burial ceremonies were designed to reflect and keep the status of the dead person in their next life.

Just like the people of ancient Egypt, the people of ancient China also used religion as a way to explain the unknown and natural phenomena that they encountered. People in the Shang Dynasty worshipped many different types of gods as well including weather gods, sky gods, and river gods, however the most powerful god was Shang-Ti. Shang-Ti was the supreme god who ruled over all of the other gods. Similar to Shang-Ti was T’ien, which translates to “Heaven”, who also ruled over the other gods, but T’ien also decided who would be the emperor or empress of China by giving them the Mandate of Heaven. The Mandate of Heaven was the right to rule granted to the emperor or empress from the gods, and it was believed that whenever an emperor or empress lost power it was because T’ien had revoked the Mandate of Heaven.

While the people of ancient China worshipped many gods, another very important part of ancient Chinese religion was ancestor worship. The people who lived under the Shang Dynasty strongly believed that whenever their ancestors died, they became similar to gods, and deserved to be worshipped as if they too were gods. Each family in the Shang Dynasty would not only worship the gods, but would also worship their own ancestors. Along with ancestor worship, during the late Shang Dynasty, people in ancient China also began to use written oracle bones to try to predict the future and also to communicate with the gods.

Ancient China and ancient Egypt were both two sophisticated civilizations that created a religion as a way to explain the natural phenomena they encountered and the unknown. Although different in many ways, their religions do share many similarities with each other. One of these similarities is that both of the religions are polytheistic. In both Chinese and Egyptian religion, there are many different gods, and each god rules in their own domain. However, not only do both religions have more than one god in them, but also many of the gods from both religions are very similar to each other in the sense that they rule over the exact same thing. For example in ancient Chinese religion there is a sky god, just like the sky god in ancient Egyptian religion. Another similarity that both religions have in common with each other is that each religion has it’s own “high god” that rules above all of the other gods.

For the Chinese it is Shang-Ti, the supreme god who rules above all of the others, and for the Egyptians the supreme god is Amen- Re. Along with similarities between their gods, both ancient Chinese and Egyptian religion also share a lot in common amongst their burial rituals. In ancient China and ancient Egypt the people held a strong belief in an afterlife after death. Which is why in both ancient China and ancient Egypt, during the of burials of their leaders, pharaohs and emperors were buried with large amounts of treasures and other material items to help prepare them for their next lives. One more similarity between the two religions is that in both ancient China and in ancient Egypt the rulers were viewed as gods. In Egypt the pharaoh was viewed as being the direct descendent from the gods and was seen as a god himself. In ancient China the king of the Zhou dynasty was also viewed as the descendent of the spirit god, and was also seen as a godlike figure.

One difference between the two burial practices is that the Egyptians preferred to preserve their dead because they believed the dead would need their bodies in the afterlife where as the Chinese tended to either bury or cremate their dead. On top of different burial practices, the ancient Egyptians also spent immense amounts of resources building elaborate pyramids to house their dead pharaohs. Even though the ancient Chinese did build elaborate tombs for their dead emperors, they did not spend nearly as much effort or time as the Egyptians did. Furthermore, the ancient Egyptians tended to clean out the organs of their deceased before wrapping them up in linens where as the Chinese would wrap up the bodies of their deceased in silk and would not remove the internal organs.

Originally used as an explanation for the unknown, religion evolved into a huge part of society. Two societies where religion became a very significant part of daily life were ancient Egypt and ancient China. Both of their religions appear to have similar origins, and purposes and share similarities in practices, gods, beliefs, and customs. While there is much in common between the religions of the two civilizations, there are also many differences between the two religions including their worshipping and burial practices. Separated by thousands of miles, these two civilizations created their own religions that held many similarities with each other, but also had significant differences to help clearly separate the two.

Bellah, Robert N. Religion in Human Evolution: From the Paleolithic to the Axial Age. Cambridge, MA: Belknap of Harvard UP, 2011. Print.

Religion in Ancient China and Egypt. (2016, May 13). Retrieved from http://studymoose.com/religion-in-ancient-china-and-egypt-essay 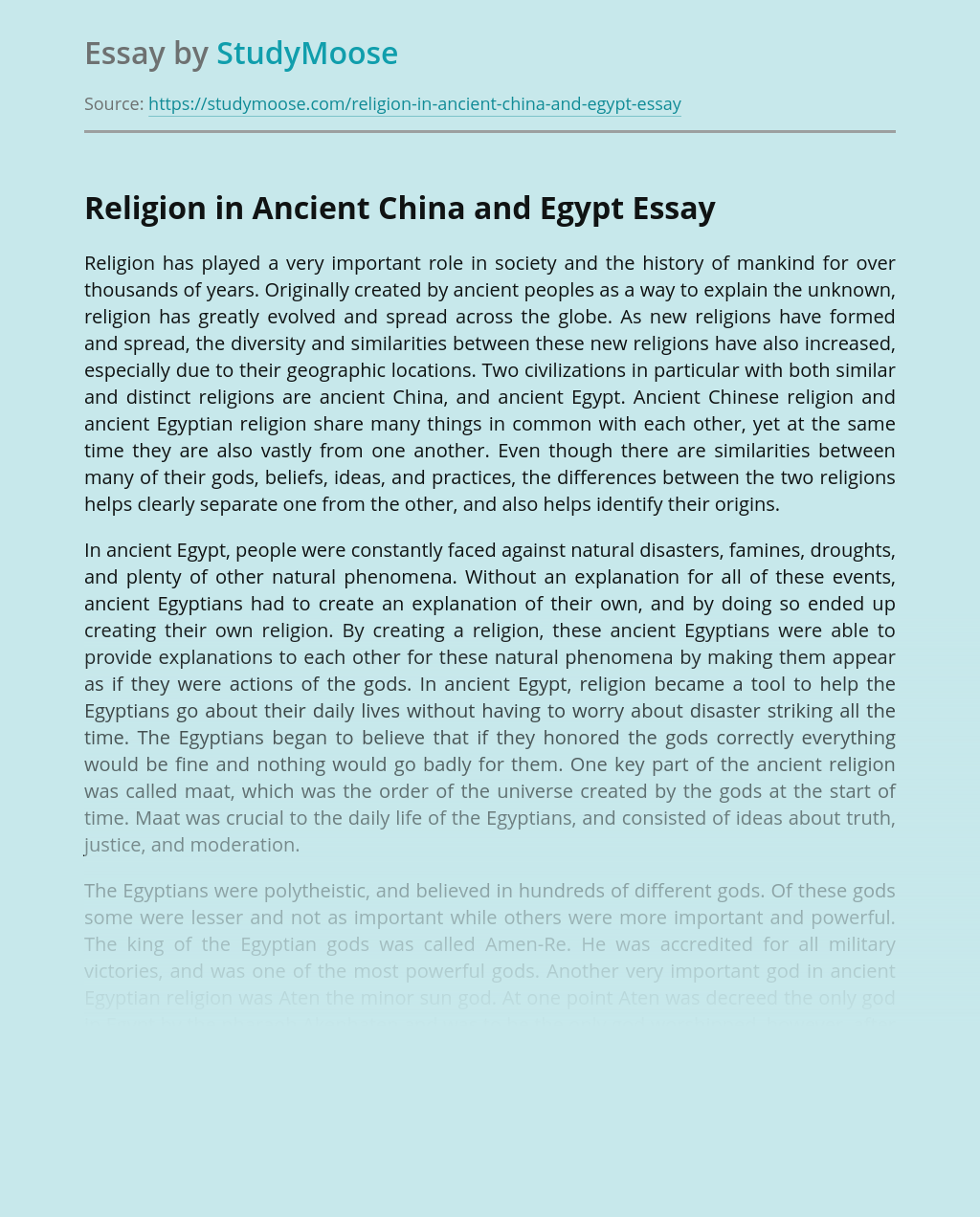 Don’t waste time
Get a verified expert to help you with Religion in Ancient China and Egypt
Hire verified expert
$35.80 for a 2-page paper
Stay Safe, Stay Original