Don't use plagiarized sources. Get your custom essay on
“ Reintroduce death penalty ”
Get custom paper
NEW! smart matching with writer

This is because it ensures the offenders of the heinous offenses do not get another chance to commit such crime again. In addition, the death penalty consoles the victims grieving families. Those opposed to death penalty, abolitionists argue that there is no deterrent effect on crimes, and government wrongly uses it as power to take life. They claim that it is the death penalty is a means to bring about social injustices through targeting people who cannot afford good attorneys, and people of color disproportionately.

They argue that life imprisonment is less expensive and more severe than the death penalty.

Capital punishment, in many countries, cultures and societies, throughout the human history has been applied in the justice system; the question that arises is that is it morally acceptable? Is it justified? Both the advocates for death penalty and the opponents of death penalty have valid arguments to back up their reasons. Those for the death penalty argue that the act of capital punishment is a deterrent to crime. However, those against argue that the death penalty is only a life imprisonment and not a deterrent to crime. It is however evident that the deterrence from the perspective of capital punishment is about the murderer’s mind involving the existing psychological processes (Haag 70-71).

Capital punishment is a punishment creates fear, especially in the minds of sane persons. Haag (2003) in his article On Deterrence and Death Penalty, people refrain from dangerous and harmful acts because of inchoate, vague, habitual, and most importantly preconscious fear (Haag 72). Everyone fears death, and most criminals would have a second thought if they were aware their own lives would be on the line. There are not so many justifications and evidence of death penalty to effectively deter crime than the usual long term imprisonment. The countries or states with the capital punishment has no lower rates of crime or rates of murder than those countries and states without those laws. On the other hand, the states or countries that campaign against capital punishment have not shown any significant deviation in the rates of murder or crime. The indicates that capital punishment has no defined deterrent impact. Claims that the executions dissuade particular number of murders have been discredited thoroughly by the researches of social sciences. In fact people do commit murder widely in the heat of passion basically under drug or alcohol influence, or because of mental illness, without thinking about the implications of the act.

Those murderers who make plans of their murder crimes expect and intend to escape punishment by avoiding getting caught (Haag 70-73). On the other hand, some social research has found that execution has a significant deterrence to incidents of murder. In addition, the implementation of the capital punishment is related to the increased murder incidences, while those against the death penalty argue that the capital punishment is used unfairly against the African Americans, every extra execution prevents murder of 1.5 African Americans. In moratoria, death row, and commuted sentences removals tend to increase murder incidences. Americans have emerged to support the capital punishment for reasons such as; the existence of minimal justification that suggest unfair treatment of the minorities, and that the death penalty results into a reduction or deterrent to crimes and saves life. Those for capital punishment believe that the death penalty ultimately deter murderers from killing more innocent people. No concrete evidence justifies this assertion. Therefore the supporters suggest that the capital punishment is a basic reminder to the general public that there is no reward for crimes. It gives people a notion that if you engage in killing innocent people then you are forced to pay a quite high price (Zimring 95-96).

Abolitionists, opponents of the death penalty argue that there is no need to take the life of a criminal to deter life, and that imprisonment in itself is a deterrent to criminal activities. Zimring (2004) asserts that deterring crime is only possible by frightening the would-be criminals by arrest, conviction, and punishment. However, imprisonment may not be enough for some criminals to stop committing more crimes. A number of criminals such as serial killers believe that they would never be caught and brought to justice. For these kinds of criminals, the death penalty should be warranted to teach others a lesson and instill fear in them. The advocates of anti the death penalty argue that capital punishment is irreversible, and may lead to making irreversible mistakes. I accept this fact because once someone is awarded the death penalty; there is no reverse even if they only failed to prove their innocence (Haag 77-78 ). However, the probability of making a mistake with the death penalty is very minimal, extremely low. Capital punishment is very extreme.

Therefore, the judicial system exercises it with a lot of care and caution. Because of the various guaranteed rights protection of people facing capital punishment, guilt must be determined by convincing and clear evidence that leaves no room for alternative justification of facts. The right to appeal is also protected for the convicts, and other privileges that ensure only rightly accused persons are awarded the death penalty. According to Haag, whenever life is at stake, trials are often more likely to be fair, and the death penalty is less often inflicted unjustly than others. Therefore, the abolitionists’ argument of making irreversible mistakes is unjustified. People have argued that the death penalty theory is correct since people are deterred from doing crimes by what they fear most, that people fear death more than any other punishment, that the death penalty is a deterrent to crimes that any other punishment possible, and that the capital punishment is humane enough and the law supports it.

Analyses of Eighth Amendment demand courts to consider the evolution of decency standards. This is important in ascertaining that a particular punishment constitutes an unusual or cruel punishment. It is required that when considering evolving decency standards, objective factors that show a change in standards of the community must be observed and independent evaluations made concerning the reliability and/or essence of the statute in question. Although the death penalty is being considered effective in deterring capital crimes, the Supreme Court ruling discredited capital punishment for juvenile offenders. Majority opinion indicated that juveniles are irresponsible and immature. They have incomplete character development and are greatly vulnerable to negative influences. The Supreme Court deduced that adolescent offenders assume reduced accountability for their crimes. However, social science researchers point out that people do commit murder widely in the heat of passion. The reason for this may be influence from drug or alcohol, mental illness.

This renders little or no thought to the consequences of the act. Those murderers who make plans of their murder crimes expect and intend to escape punishment by avoiding getting caught. Therefore, the death penalty may be appropriate in such cases (Zimring 98-101). In conclusion, I support the arguments given by the proponents of the death penalty, the pro-capital punishment. I think death penalty should be reintroduced. I take this stance because I believe the death penalty serves a definite purpose of deterring crime and bringing criminals to justice, as well as honoring the victims. For capital punishment to rightly serve this purpose, it must be made efficient and more effective. The system of justice has gone through a drastic transformation to ensure only rightly accused persons are brought to justice.

I believe the death penalty ensures societal safety, brings criminals to book, brings justice to the victims, and deter crimes and reduce the number of criminals. From these illustrations, I believe capital punishment should not be abolished. Capital punishment is necessary to maintain public safety and keep justice shining in the society. It also cuts down the number of convicts on death row. The death penalty relieves families and friends who lose their loved ones in the merciless hands of criminals. It also solves the problem of overcrowding through a humane action. From this account, the death penalty aids in resolving a number of societal criminal issues. Therefore, I take the stance of the pro-capital punishment: I support the reintroduction of death penalty. 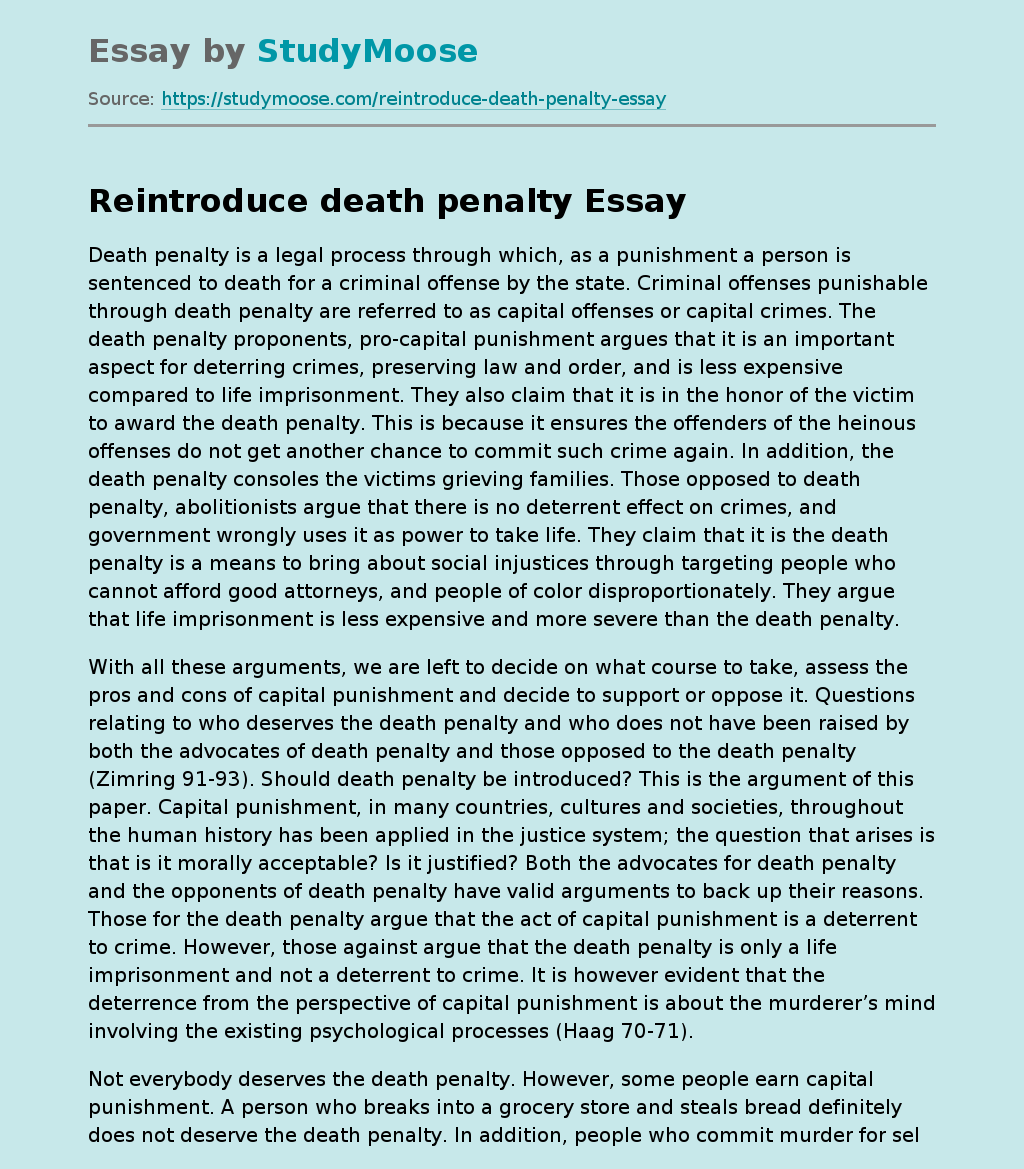