An effective teacher is one who is organized, not biased, patient, and flexible and knows how to teach medium and slow paced learners. The essay also speaks about Development; persons develop physically, socially and also personally.

Turn in your highest-quality paper
Get a qualified writer to help you with
“ Reflection on Cognitive Development ”
Get high-quality paper
NEW! AI matching with writers

It also speaks about the different ways in which development takes place. The brain begins to lateralize soon after birth and therefore have specific functions to carry out. Piaget’s theory of cognitive development speaks about the four stages while Lev Vygotsky educates us on his sociocultural perspective.

Educational Psychology is important to me as a teacher in training as it helps me to understand my students’ behaviour and the strategies that I can use to help them.

Life is a process and therefore we go through changes from conception to death. This process is called development. We develop physically, socially, and also cognitively .The changes that occur early in our lives, are generally assumed to be for the better and to result in behaviour that is more adaptive, more organized, more effective and more complex (Mussen, Kogner, Kagan, 1984).I also learnt that development takes place at different rates and that is persons may be more coordinated than others and also be more mature in their thinking.

Maturation deals with the natural changes that take place in our bodies. The changes in the climate don’t affect the natural changes that will take place in our body only severe sickness or malnutrition. The brain is also important in cognitive development as each part is given a specific function to carry out. However, the different parts of the brain combine in order to perform human activities and construct understanding. There are some terms that are associated with the brain and the first is synapses, as the word suggests they are tiny spaces between neurons and that chemical messages are sent across the gaps. Hippocampus really took me by surprise as the first syllable “hippo” is the name of an animal. However it means recalling new information and recent experiences. Myelination is also very new to me and it means influencing thinking and hearing.

The basic tendencies in thinking help us to organize our thoughts and behaviours into coherent systems. Our thinking process and knowledge is now developed through adaptation and this is adjusting ourselves to the environment. Assimilation, accommodation also takes place. Sometimes it seems as if I am searching for some balance in my thinking and this is known as equilibration.

Piaget’s theory of cognitive development is not foreign to me as I did in Introduction to Psychology. I know that there are four stages and each stage has a different age group. The fist stage is the sensorimotor stage and children at this stage are usually zero to two years of age. The most significant things that occur at this stage are: the children develop object permanence, perform goal directed activities, use there senses and also uses imitation. The pre-operational stage is age two to seven years. Children are able to use symbolic function for example taking a broom and riding it saying that it is a donkey.

There motor skills are being developed and therefore they would want to feed themselves. In the concrete operational stage children are able to think logically, can engage in a conversation and reversibility, classification and seriation takes place. The final stage is the formal operational stage and they are able to reason well and they also develop adult egocentrism and that is the heightened self consciousness that is reflected in adolescents and the belief that others are interested in their thoughts as they do. It also speaks about them having a sense of uniqueness and wants to be noticed by others. However some students will develop reckless behaviour including suicidal thoughts and drug abuse.

In my opinion Vygotsky’s theory is much better than Piaget’s. He placed more emphasis on the development of language than Piaget. He also states that language is the most important symbol in the development of language. As a child I use to talk to myself and now I know that it is private speech. I really believe that private speech guides an individual into making the right decisions and also into problem solving. The most important part of his theory is the zone of proximal development. My understanding of it is that at a particular stage in one’s life given guidance and support will help me as an individual to master something.

Children first learn pronounciation and they shy away from those words that are hard to pronounce. For example my three year old son says ‘begetable’ instead of vegetable. I also believe that adults should use language in the child’s learning experience and don’t use high flown words because the child should be able to relate to what is being said. Vocabulary, grammar and syntax are developed at around age five. However parents can buy books, read to their children, take them on a nature walks and also answer their questions so as to develop their language. 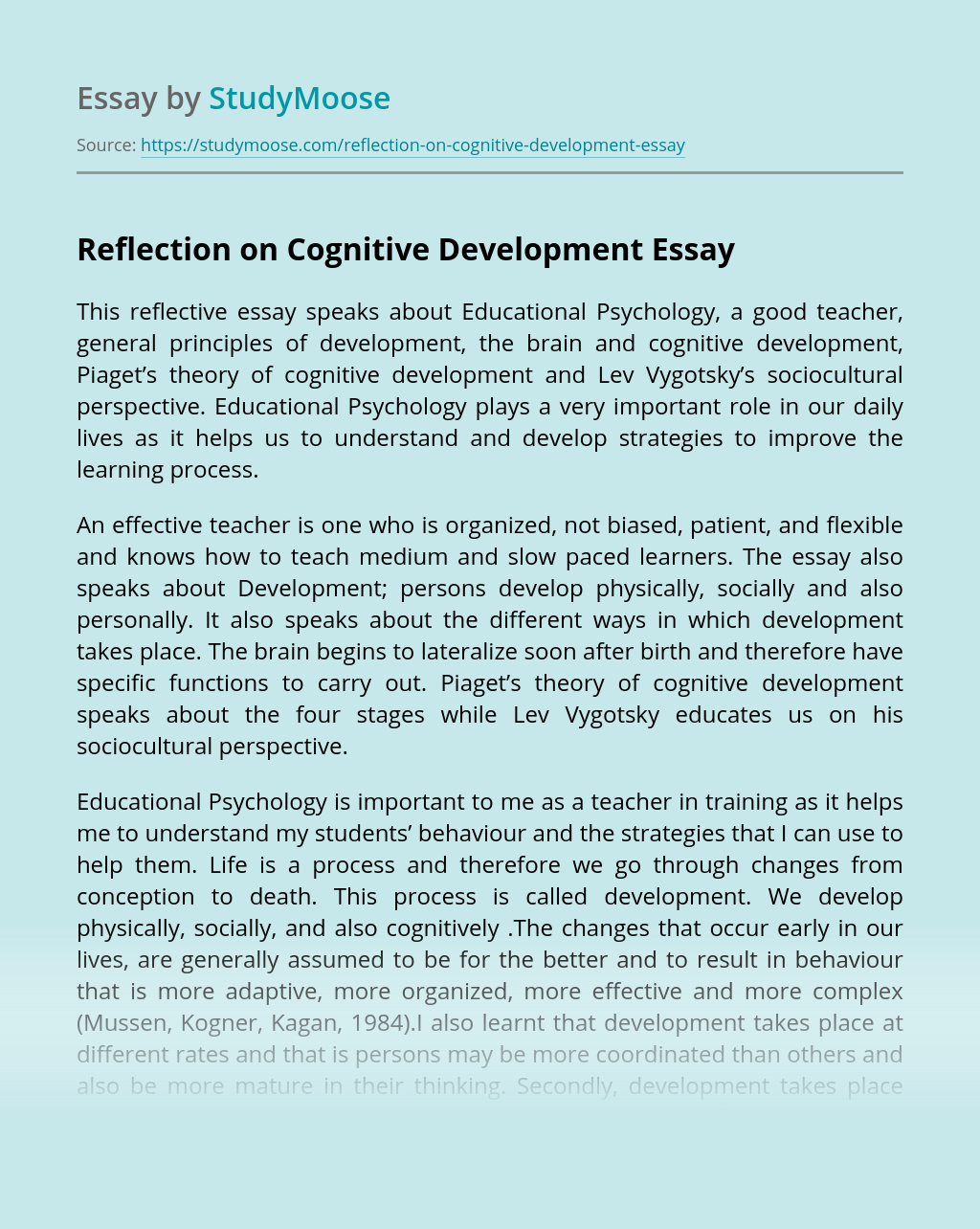 Turn in your highest-quality paper
Get a qualified writer to help you with
“ Reflection on Cognitive Development ”
Get high-quality paper
Helping students since 2015
Stay Safe, Stay Original