They are also cheap, light, durable, easy to carry and in many cases, free. The most commonly used shopping bag is made of High Density Polyethylene (HDPE). This type is used in the majority of supermarkets and stores. After these bags are used, they often end up in landfills or as litter, roughly only three percent of plastic bags is actually recycled per year (Planet Ark, 2011). The materials used in making plastic bags make them non-biodegradable.

According to the science dictionary, 2011 refers to “these materials cannot be decomposed into environmentally safe waste materials by the action of soil bacteria.

Don't use plagiarized sources.
Get Your Custom Essay on Recycling and Plastic Bag Just from $13,9/Page

” These harmful substances are toxic and take approximately four hundred years to break down, or in this case photo-degrade; which is how plastics made from (HDPE) break down. Since they are not biodegradable, they remain in the environment and are absorbed in soil or water (Indian Centre for Plastics in the Environment, 2010).

This essay will discuss the various harmful effects of plastic bags, and demonstrate the risks that these bags impose on humans, animals and the environment.

It will also discuss a series of suggested solutions that could help reduce plastic bag usage. Although plastic bags appear to be fragile and light, their negative environmental effect is devastating. Plastic bags may cause large amounts of pollution in every step of their limited life cycle, from the extraction of raw materials, production, transportation, and recycling or disposal.

Plastic bags can be defined as the most damaging form of environmental pollution. They can have a damaging effect on marine animals and wildlife in addition to the aesthetic effects on beaches, parks, and trees. Plastic bags are potentially one of the main causes of death to marine animals (Harbor keepers,2008). Up to one hundred thousand marine animals or more die each year from eating plastic bags which are mistaken for food. This can result in blocking the animal’s intestines and possibly lead to the animal’s death.

Another possible situation is that wildlife, such as birds, can get tangled in plastic bags causing choking and immobility, which may eventually lead to death. (Senior, 2008) and (Citizen Campaign, 2010). In other situations, after plastic bags photo degrade they remain toxic and could be eaten by fish, shellfish or any other marine life and survive this allows the toxins to enter our food chain through bioaccumulation (Puget Soundkeeper Alliance, 2011). As a solution to these types of problems is taking action by educating and increasing the public’s awareness to the harmful affects that a plastic bag impose on our environment.

Applying this would mean to get consumers involved in reducing the number of plastic bags they consume and instead of getting new bags they can simply reuse their old bags (Sea Turtles Conservancy,2011). Another important solution would be using bio degradable bags instead; these types of bags take up a shorter time to degrade and become environmentally safe to both humans and animals. These types of bags are made from natural materials therefore; they are digested if animals swallow them (Biodegradable Plastic Bags,2011). The harmful effects of plastic bags extend to affect human health and social lives.

According to the US CPSC (Consumer Product Safety Commission, 2011) suffocation has been a significant of death among children under the age of one. According to a report presented in 2007 by Clean up Australia, when plastic bags are thrown in the streets they may block the drains and result in flooding during heavy rain. Stagnant water in blocked drains may create a breeding ground for many forms of insects like mosquitoes, which can transmit dangerous diseases such as malaria, dengue fever, and encephalitis (World Health Organisation, 2011).

Reducing, reusing and recycling, in that order, could be the most viable option to decrease the social and health impact of plastic bags. Reducing the number of plastic bags can be applied by imposing a fee such as PlasTax. In 2002 PlasTax was issued in The Republic of Ireland, which is a fee on plastic bags. This new tax resulted in a ninety four percent drop in plastic bag consumption in one year (Convery F, McDonnell S, Ferreira S, 2007). The next step is to reuse, instead of disposing of plastic bags consumers should be encouraged to keep reusing their bags.

The final step is to recycle the plastic bags, many supermarkets such as Tesco and Sainsbury’s give the consumers the option to bring in their old bags for recycling. In conclusion, usages of plastic bags are very limited unlike their infinite damages. They are harmful to health, the environment and wildlife. The solutions to put an end to the problems associated with plastic bags are available, cooperation between governments, shops and individuals is vital to take the necessary actions by reducing, reusing and recycling plastic bags. 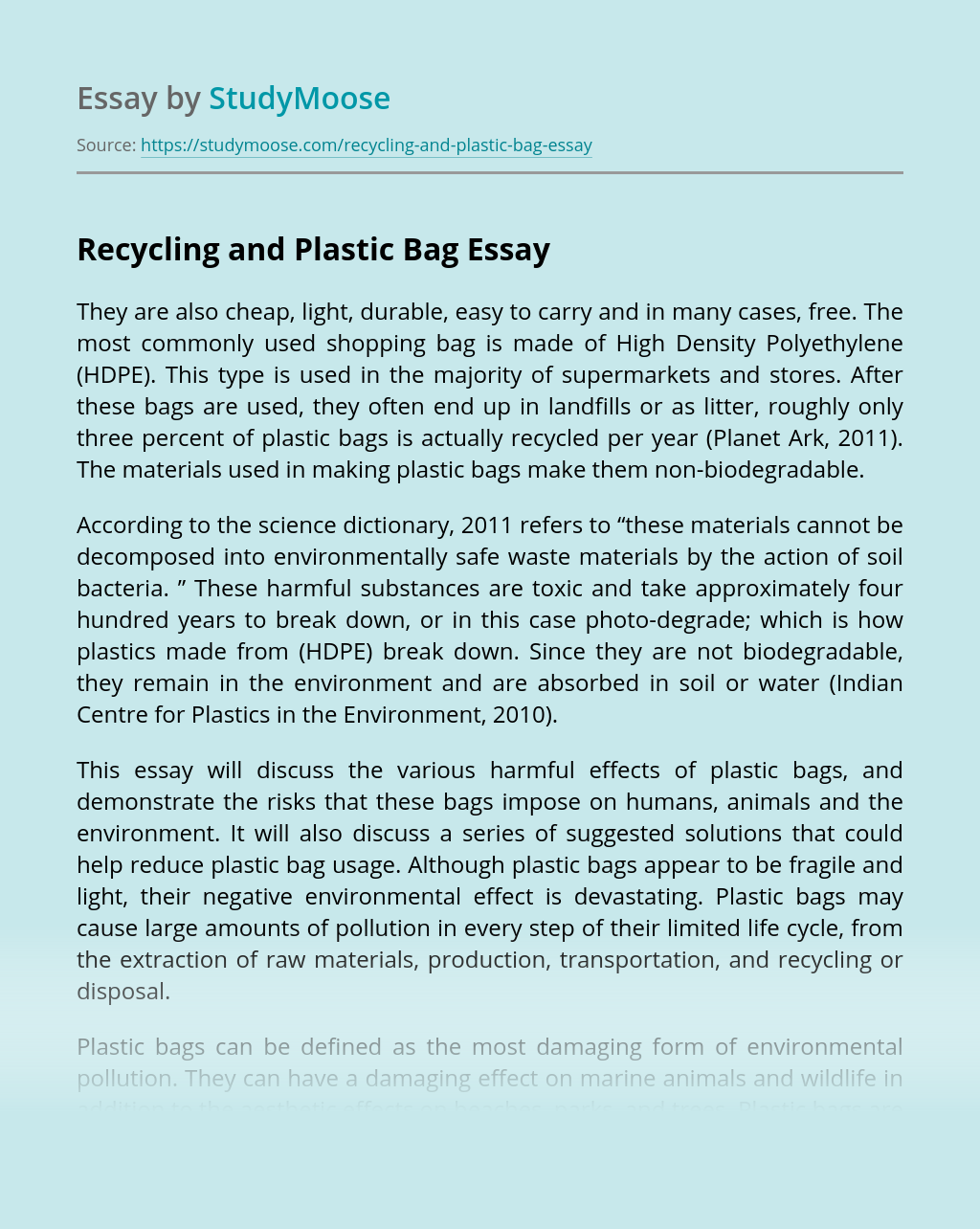 Research of Bioaccumulation and Biomagnification

Heavy metals such as lead, zinc, copper, can often be found in industrial wastewater and their discharge to the environment poses a serious threat due to their acute toxicity to aquatic and terrestrial life which includes humans. As a result of increasing industrialization more heavy metals are continually released to the environment and this has...

Get Essay
Recycling and Plastic Bag

They are also cheap, light, durable, easy to carry and in many cases, free. The most commonly used shopping bag is made of High Density Polyethylene (HDPE). This type is used in the majority of supermarkets and stores. After these bags are used, they often end up in landfills or as litter, roughly only three...