Reality shows send a bad message and they promote the generally misguided belief that they should aspire to be the reality stars they watch on their televisions. Reality TV is hurting society due to all of the impartial and unreal images that it is burning into the minds of our youngest generation who tend to watch it more than any other generation. The inappropriate language, the extreme aggression towards other individuals, the unrealistic “goals”, are all hurting the integrity of our current and future generation if it continues.

Don't use plagiarized sources. Get your custom essay on
“ Reality Television Has Negative Effects on Society ”
Get custom paper
NEW! smart matching with writer

In general, I think reality television shows aren’t good. They are often pointless, vulgar and are used solely to make money quickly. Reality shows send a bad message and help to create a cult of instant celebrity. They are typically built about shameless self-promotion, based on humiliating others and harming relationships for the entertainment of each other and the viewers at home. These programmes suggest that anyone can become famous just by getting on TV and “being themselves”, without working hard or having any particular talent.

Proficient in: Negative Effects Of Television

Kids who watch these shows will get the idea that they don’t need to study hard in school or train hard for a regular job. They mostly show ordinary people with no special talents doing very little. If they have to sing or dance, then they do it badly, which doesn’t make for good entertainment. They rely on humiliation and conflict to create excitement.

Furthermore, the programmes are full of swearing, crying and argument, and often violence and, drunkenness.

This sends a message to people that this is normal behaviour and helps to create a crude, selfish society. Reality T.V isn’t reality, but kids think it is! When they could be outside, playing with friends, they now have some concept of real-life being dramatic and eccentric. But the fact is, your life isn’t scripted like the Kardashians, and you will never get that feeling. It’s better to live life than watch someone else doing it. Shows like Honey Boo Boo are not famous because they are appropriate and realistic, but because they are extreme, full of drama and bad behaviours that, in the TV show, would lead to great storytelling. These shows influence bad behaviour in adolescents. If you’re a fan of reality TV, the spoiled and entitled behaviour that you see on your favourite shows can both disgust and intrigue you. Reality television stars are encouraged to do erratic and irresponsible things because it promotes the show and translates into money for everyone directly involved. However, as a general rule, it’s not advisable to get drunk in public and start a fight with someone. Spending insane amounts of money on clothes and cars that you can’t afford isn’t a smart idea either.

Most of all, it’s important to remember that reality TV isn’t actually reality. The cast members are paid to wear designer clothes, drink way too much champagne, yell at each other for no apparent reason, and behave irrationally. They are paid to show off their lavish houses, use certain brands of technology and appear on the red carpet. So spending your parent’s money for no apparent reason on material objects you don’t need is not a good idea. Don’t be fooled by the fact that this genre of television is referred to as “reality,” and start imitating the behaviour of your favourite reality stars. Unless of course, they’re showcasing their talents or doing something that will benefit society. 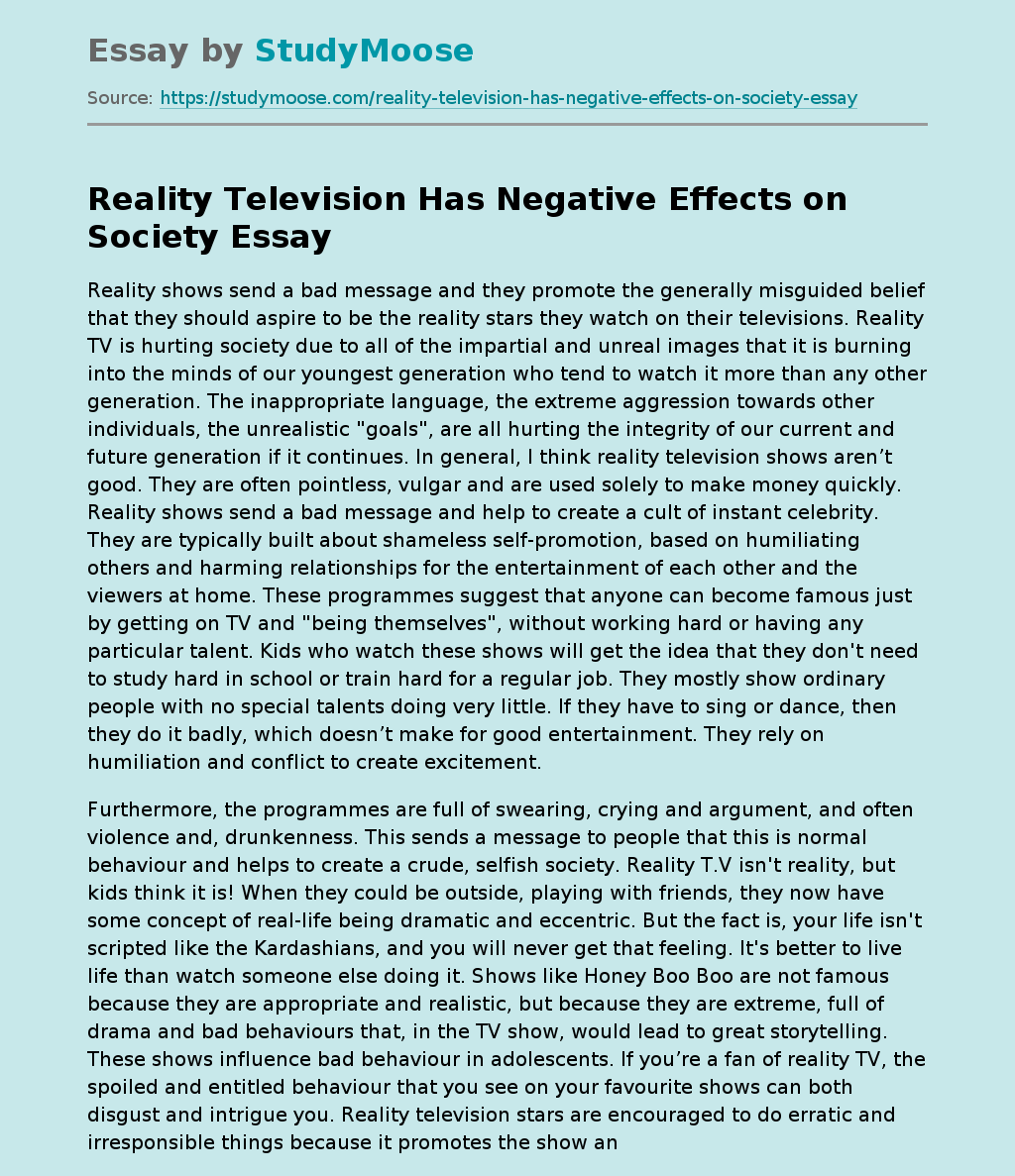