From 1980 until 1982 the United States went through another recession. Federal Reserve chairman Paul Volcker created a restrictive spending policy which did slow down spending as expected. Reagan then created what is known today as Reaganomics, with Reaganomics President Reagan promised reduced federal programs, deeper tax cuts for wealthy Americans, and he made the government smaller. In July of 1981 President Reagan announced his intentions of cutting down the budget by $41 billion. He referred to this proposal as a second American revolution for hope and opportunity.

Don't use plagiarized sources. Get your custom essay on
“ Reaganomics and Foreign Policy of USA ”
Get custom paper
NEW! smart matching with writer

Reagan believed by lowering taxes it would make companies be able to provide more products and the U.S. citizens would spend more, therefore making our economy grow. I fully believe in this idea. If we pay fewer taxes we have more money to spend therefore we can either invest more or buy more things and it boosts the economy. That is why I don’t understand why we aren’t cutting taxes today and getting ourselves out of this recession.

I truly believe in Reaganomics.

At the end of the Cold War and with the soviets not threatening the U.S anymore the U.S Government decided to focus on other conflicts that were threatening world peace. One of them being the conflicts between Iraq and Iran, this conflict had been going on all through Reagan’s term in office. During this time the United States had given information and weapons to Iraq. This aid to Iraq helped their leader Saddam Hussein prevail.

Soon after the war between the countries subsided the United States realized they had made a mistake. Saddam Hussein had accumulated so much debt during the war that in order to pay down his debt he invaded his neighbor country, Kuwait. In 1991 George W. Bush declared war with Iraq over the invasion. With the help of some European nations Saddam Hussein retreated from Kuwait. Since President Bush was content with this outcome he decided to not capture Saddam Hussein. This was not at all a good decision on President Bush’s part. If President Bush would have captured Saddam Hussein during the Gulf War our country would not have ended in another war. We also would not have had to go the struggle of finding and capturing and loosing as many men as we have during that time.

Reaganomics and Foreign Policy of USA. (2016, Mar 19). Retrieved from https://studymoose.com/reaganomics-and-foreign-policy-of-usa-essay 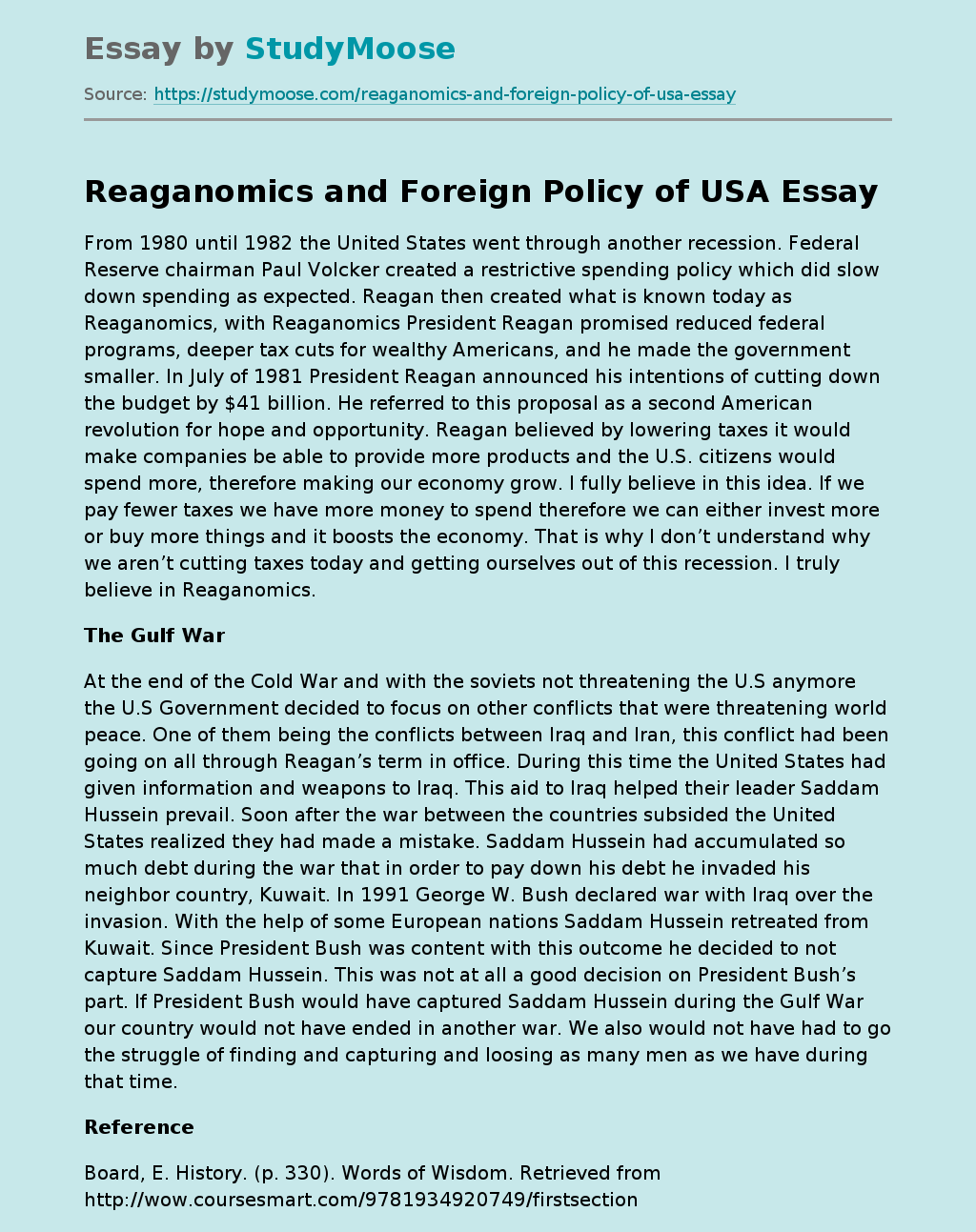