I am a super huge basketball fan. During this time of the year, I will watch games of National Basketball Association (NBA) several times a week. I also suddenly become an active commenter in the online basketball forums, cybertalking about the dunks and three-pointers that I have never attempted and judge over trades that I could never have had a hand in from time to time. These activities around basketball have become some indispensible parts of my life that, once I have missed something “basketball-ly” undone, a feeling of emptiness and unfulfillment always strikes me hard.

Don't use plagiarized sources. Get your custom essay on
“ Sport Rituals ”
Get custom paper
NEW! smart matching with writer

Proficient in: Rite of passage

Yet few rites are discussed, I hope that this generic examination will allow some observation into the very insight of sport ritual studies.

We should understand sport rituals prior to put them into categories. To define sport rituals, we may be enlightened from the ritual theory that ritual studies scholar Emile Durkheim has offered. Durkeim (1995) has defined rituals as (1) related to religious rites or ceremonies, (2) an action or a series of actions that are regularly or habitually performed in repetition, and (3) the non-performance of such actions will arouse tension or anxiety.

The non-performance of these activities must also generate tension and anxiety. For example, that Michael Jordan always wore his Northern Carolina underwear for every professional basketball game he played is a sport ritual of sport competition, because it was believed to assist the completion of the sport competition, and he would have felt uncomfortable without doing it that its non-performance results in anxiety (in fact Michael Jordan had never played a game without wearing his Northern Carolina underwear).

Accordingly, that Michael Jordan participated in the basketball games as a professional athlete is not sport ritual, but a simple sport activity that he regularly engages in. For sport spectating rituals, for instance, that a football fan frequently drinks beer at the bar when he watches his home team games for mere pleasure, is not ritual; but, provided that the non-performance of either football-watching or beer-drinking or both will produce some ritualistic discomfort, the activity or activities are considered as rituals of sport spectating.

In this analysis of sport rituals, the ritual genres under examination are the genres Catherine Bell has categorized in her book Ritual: Perspectives and Dimensions.

Like how John Lyden puts these categories in his studies of films and rituals, I will consider these categories of ritual activities that Catherine Bell summarizes on sport ritual analysis. In a similar approach to Lyden’s, I will investigate into the popular sport culture to analyze whether and how these sport rituals can fit into three major categories: rites of passage, calendric rites and rites of exchange and communion.

Few sport rituals are considered as rites of passage, as sport activites are seldom suggested as transformatory. However, a number of sport rituals, which assist the completion of other rituals, are qualified as rites of passage. It is not uncommon that people often associate rites of passages with ceremonies such as debutante parties, weddings and high school proms, where the ritual participants are symbolically or metaphorically transformed to enter the next level in life, such as school, career, etc..

The general sport rituals, however, appear to be without the sufficient capacity to allow the participants to symbolically progress. Yet many may consider some sport events of sequential significance, such as the first competitive game that a child ever plays, or the game a soccer player earns his the 100th cap for his national team, are sport rituals of passage. The child’s first game suggests that he might start to understand teamwork and competition, and the 100th cap suggests that the player might become a veteran in his career through his long time devotion.

However, unlike other acknowledged ceremonies and rites of passage, these sport events are not specifically held or displayed for the passage, and the notion of the transformation is barely emphasized in these rituals. The child will not specifically have more physical competition in his first game, and the soccer player will not have more passes from teammates due to his veteran status. These sport activities are more events that contain a natural or logical transition rather than particular rites that exhibit and emphasize the significance of the transformation.

Think about the celebration parents prepare for their boy who just has his first soccer game in school: it can be a specific family meal, a promise of Disneyland visit, or a toy football gift. Whatever the form the celebration is, this celebration is a sport ritual of passage, as it fulfills the completion of the child’s sport activity and celebrates on the child’s transformation. These rites symbolize the notion and indicate the transformation by specific sport activities.

Another sport ritual example as a rite of passage is the testimonial match or the memorial match, commonly and frequently played to celebrate athletes’ retirement or anniversary. Clubs or national teams always arrange friendly match in the honor of the player who contributes his long-time dedication and effort to the team. This game is also considered as the last game the player represents for that team. The testimonial match is less competitive and athletic than normal matches, as it emphasizes on the athletes’ transformation rather than the match per se.

In these sport rituals where the transformation is stressed, they become rites of passage. Sport events and activities are often calendric, or more broadly speaking, periodical; however this periodicity is not often a natural form of cylindricality, but an institutionalized repetition. However, many noted sports are institutionalized in so routinely ways that these institutional routines are subsequently ritualized. Consequently, a number of sport rituals are developed into calendric rites through institutionalization.

Many organized sport events have routinely and predictable schedules. The Premier League matches are usually held on Saturdays and Sundays; the UEFA League matches are always played on every other Tuesdays and Wednesdays during its group stage. On the annual level, many organized sport events are running on seasons, which cover over the same period of time every year. For example, the NBA season always starts in late October and ends in early June in the following year. The exact dates for each season may vary slightly, but the running season usually remains unchanged.

On these game days or seasons, sport rituals are accordingly anticipated and practiced. However, this predictable periodicity of ritual practices is in fact institutionalized rather than settled by natural reasons such as the seasonal change; and the periodicity is completely alterable due to institutional changes. For example, the NBA went through a “Lockout” in 2011 because of the disputation about the earning distribution among team owners and players, which delayed its expected inception of the 2011-2012 season from November 1 to December 25.

This institutional incident resulted in a calendric change, and the basketball rituals are consequently altered according to this change. No basketball rituals are practiced during the lockout, and only after the settlement did these practices continue. The institutional change results in the alteration in ritual practices. Moreover, these sport rituals that were practiced in the shortened season are accordingly modified to accommodate the calendric change. Therefore, the sport rituals with institutionalized schedules are not exactly calendric rites.

Another example is the African Cup of Nations (CAN), which was held every two years on even-numbered years since 1968. However, it a will switch to being held in odd-numbered as of 2013 so that it does not clash with the FIFA World Cup. This institutional alteration will result in a major calendric change in CAN’s organization; however this change does not interfere with its ritual practice other than calendric change. Therefore, it is reasonable to not consider the majority of sport rituals as calendric rites.

Even though many periodical sport events are subject to institutional alteration, the schedules of few sport events have been arguably ritualized and transformed into calendric routines. For example, the most celebrated American sport activity, the Super Bowl, is so athletically and culturally significant that it deeply influences the nature of the very Sunday on which it is held. The first Sunday in February now is ritualized into an American de facto national holiday, even though it is only an institutionalized game day for the NFL Championship match.

Many sport rituals remain the interrelatedness among participants that are involved in the rites of exchange and communion. However, it is uncommon that sport rituals incur religious offerings and sacrifices to divinities that are performed at traditional rites of exchange and communion; instead, the sport rituals are presented in personalized and stylized offerings in exchange to another unknown presence, the luck, which supposedly determines the outcome of the sport competition, in an irreligious way.

The rituals of exchange and communion are often closely connected with victories. As many athletes and fans have claimed, as well as what George Gmelch indicates in his observation, that these rituals can influence the luck that presumably determines the result of sport competitions. Accordingly, the communion between sport participants and the luck replaces the communion between the humans and gods in traditional rites of exchange and communion.

However, the sacrificial victim and executor is often the same person in the sport rituals of exchange and communion. The ritual participant engages in a series of highly personalized and stylized actions that are normally unacceptable or unbearable to normal people as offerings or sacrifices. Boston Celtics point guard Jason Terry always wears the shorts of the opposing teams the night before the game day for over ten years.

Perhaps the greatest goaltender in the history of the National Hockey League, Patrick Roy, always skated backwards towards the net before the game begins in his lifetime career. When these rituals are done, victories are anticipated in return. These uncommon ritualistic practices are believed to bring victory in the sport competitions and build the connection between the ritual participants and the luck. Once the rituals are completed, the relationship between the ritual participants and the luck is subsequently formed.

Sport rituals are everywhere, however they are not often examined. In this article, I mainly discuss the definition of the sport ritual and its three main dimensions according to Catherine Bell’s theory. In general, sport rituals are the repetitive sport activities with ritualistic significance attached, and they range from direct sport competitions to indirect sport-related activities. Sport rituals also have a very diversified range of ritualistic practices. This article discusses three main genres of rituals practices: rites of passage, calendric rites and rites of exchange and communion.

Admittedly, there are also numerous sport rituals that do not belong to any of the three categories, and these rituals are as important as the rituals in discussion. The rites of passage are often the celebrations or assistances to the completion of sport rituals, where the notion of transformation is specifically emphasized. Testimonial matches are probably the most notable example among all the sport rituals of passage. Sport ritual can also be calendric rite, however it is usually its cultural or political significance that ritualizes the institutionalized calendric periodicity. 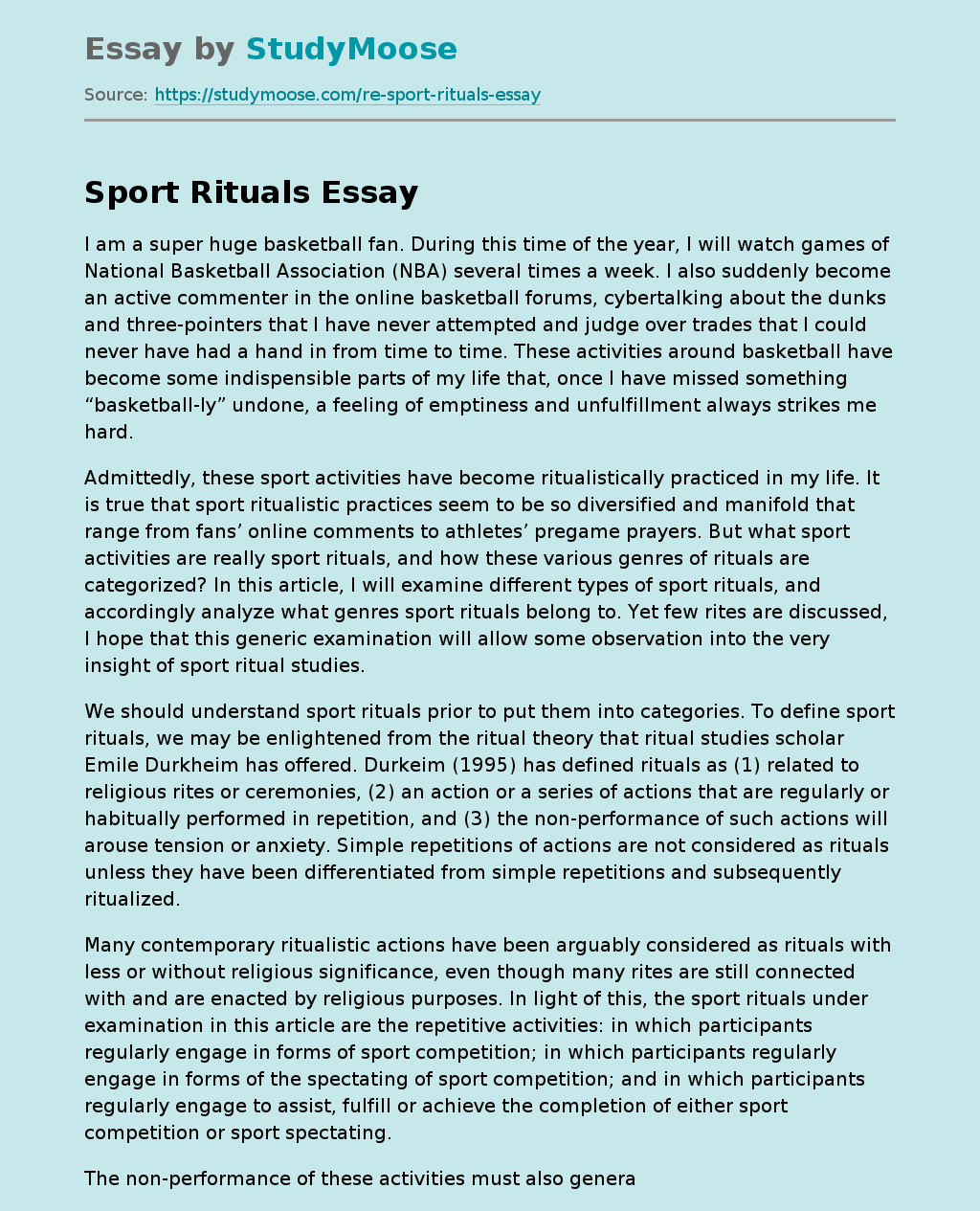