Irony In Nathan The Wise

Nathan the Wise is a call for reexamination among those who consider themselves as having the monopoly on truth while the rest of the world are supposedly living their lives based on false creeds. The misunderstanding among peoples or nations is rooted in this perception. Gotthold Lessing’s play sought to highlight the innate prejudices of his characters’ religious affiliations and subsequently provided a pithy reminder in the form of an irony. “Ah! Indeed you do not know how closer I shall cling to you henceforth.

Don't use plagiarized sources. Get your custom essay on
“ Irony In Nathan The Wise ”
Get custom paper
NEW! smart matching with writer

We must, we will be friends. Despise my nation. We did not choose a nation for ourselves.

Are we our nations? What’s a nation then? Were Jews and Christians such, e’er they were men? And have I found in thee one more, to whom It is enough to be a man? (Lessing)” This was Nathan’s response to The Templar on the latter’s perception of Jews. The irony is on the second to the last sentence which implores humanity to be humane or kind to others regardless of what one believed in.

Lessing is contrasting people living their lives based on religions and men who are humane kind to their fellowmen. The irony is in our supposition that our beliefs save us, guide our conduct, and teach us to be human.

Yet the same precepts tend to make us biased and often cruel to those outside our fold. Indeed everyone is certain that his belief is the truth among many “lies”. Sometimes it’s this self-righteousness that makes us unjust.

A paradox as pointed out by Lessing. It is ironic that a play written more than two centuries still holds true today. IRONY IN TARTUFFE Moliere parodied religiosity through his play, Tartuffe. Moliere created a very witty play of witless characters-with the exception of the servant girl, Dorine and Cleante. The irreverence of the play could explain away its banning during its time.

Hypocrisy is personified by Tartuffe as credulity is personified by Orgon. There are gems of literary passages in the play that demonstrate irony. One particular instance was the interjection of Dorine to Orgon who was convincing his surprised mother about Tartuffe’s masquerade. This passage in Act V, Scene V is worth considering: “You are quite wrong, you have no right to blame him; This action only proves his good intentions. Love for his neighbour makes his virtue perfect; And knowing money is a root of evil, In Christian charity, he’d take away

Whatever things may hinder your salvation. ” Orgon and his family are about to be evicted from their own home by the unscrupulous Tartuffe when this particular dialogue was uttered. He was already at a loss of how Tartuffe could have done this to him. The irrepressible Dorine could not resist jabbing him verbally. To be deprived of one’s property is to be given the chance to be eternally saved since the thing that causes sin is taken away from you. The person robbing you then is in fact doing you a favor and the robbery itself is a result of good intentions.

This may be a tongue-in-cheek line but the irony is apparent in the situation where the quest for religiosity has led almost to Orgon’s total material depravity. IRONY IN THE PRINCESS OF CLEVES “If any other motives than honour and virtue were necessary to induce you to persist in that character you have hitherto worthily sustained; I would tell you, that a reverse of conduct will disturb my happiness in a better world. But should (which Heaven forbid! ) this heavy misfortune be inevitable, I shall welcome death with joy, since it prevents my being witness to your disgrace (Lafayette). ”

These last words in the deathbed of Madame de Chartres were part of a warning to her daughter of the pitfalls of falling in love while married. Rather than prevent the Princess of Cleves falling in love, it further arouses in her the need to experience what is romantic and for her which obviously she has not found from the Prince of Cleves. Aside from this irony of a warning prodding one to fall into the pit of forbidden love, Madame de Chartres or Madame Lafayette treated us with verbal irony in the last two sentences. She indicated that if the Princess will stray from the marriage path, she will be unhappy.

Still she added she might be happy in death since it will prevent her from witnessing that which would bring disgrace to her daughter. This strong admonition is quite consistent with how society looks upon extramarital dalliances. The Princess was only guilty of mental infidelity. Ironically, it was not only her who suffered but her mother, who died of a broken heart, perhaps from a daughter who ignored her; husband, who died of jealousy; the Duc Nemours who suffered emotionally; and finally the Princess herself who entered a convent.

Irony In Nathan The Wise. (2016, Sep 23). Retrieved from https://studymoose.com/re-irony-in-nathan-the-wise-essay 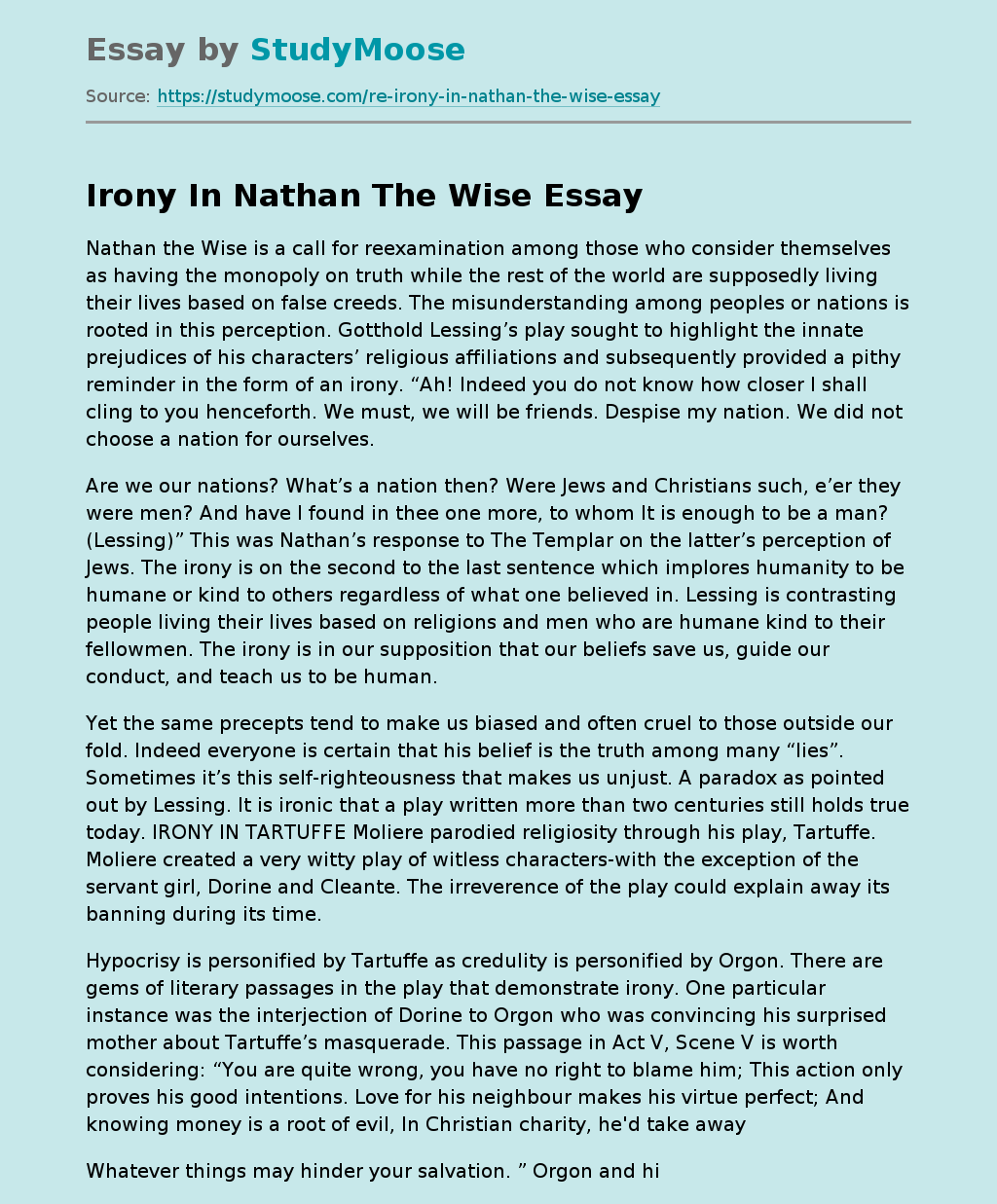