The exodus of the Joad family from Oklahoma to the promised land of California. They were cheated by tradesmen along Highway 66, harassed by border guards at state boundaries, and on arrival were burned out of their makeshift camp by police deputies. One dark night the Joads wandered into Weedpatch Camp, a government refuge for migratory farm workers, where they found clean beds, indoor privies, food, friendship, and hope. “Oh! Praise God,” whispered Ma Joad. “God Almighty, I can’t hardly believe it! ” pronounced Tom.

Don't use plagiarized sources. Get your custom essay on
“ Grapes of Wrath ”
Get custom paper
NEW! smart matching with writer

Their praises were addressed to Providence, but were intended for Washington. Here, they believed, for the first time in their lives, was hard visible proof that their government, whatever and wherever it was, really cared about them and the hundreds of thousands of people like them–landless, homeless, penniless victims of a fickle climate, an unstable economy, and a pernicious way of life. Between the Lesters of Georgia and the Joads of Oklahoma, a profound change of spirit had come upon the land.

The great revolution of the twentieth century, not only in the United States but also in the emerging nations abroad, is the kindling of an extravagant hope that the human condition of man can and should be improved, through the harnessing of the power, resources, and machinery of government, not in some distant millennium, but during the lifetime of those now living. The effective response of modern governments to this enormous challenge depends not only on the dreaming of dreams and the preaching of hope, but also on the capacity to convert the pictures in men’s heads into the realities in their lives.

4. Considering the characters in the novel, which actions do you find admirable, and why? Which do you find reprehensible, and why? Admirable A considerable indecisiveness emerges from the novel about how radical the problem is: whether the circumstances of class war exist likely from the interchapters or whether there is a clear-cut villain in the Farmers’ Association with no broader implications—likely from the chapters and their limited point of view.

The problem is partly compounded by the pragmatism of the Joads themselves, in many ways admirable in the face of degenerating circumstances but also dangerous in their willingness to lower their expectations: at the beginning Ma Joad dreams of a white house in California after a few months on the road, she hopes they may one day afford a tent that does not leak; Rose of Sharon plans early in her pregnancy a comfortable future for her child at the end she is sulking for a little milk so that her baby may be born alive.

The disadvantages of nonteleological thinking are apparent when the result is a perpetual readjustment to straitened conditions: while we are told that the metaphysical grapes of wrath are ripening for the vintage, what we see among the poor is stoicism, sacrifice, and one supreme act of charity. Reprehensible Rose of Sharon and Connie think only of themselves and of now they will break from the group, and when difficulties arise Connie wishes that he had stayed in Oklahoma to man a tractor driving the people from the land.

Later, alone, Rose of Sharon complains of her plight and frets about the coming child, and instead of sharing the family responsibility she adds to family worries. Uncle John is similarly preoccupied with his guilt and his personal problems and is almost useless to the group, picking cotton at only half the rate of the other men. Both he and Al withhold money from the family treasury. Noah, thoughtless of the others, wanders away. Connie, leaving a pregnant wife, also deserts. Even the children show a teasing selfishness.

Ruthie eats her crackerjacks slowly so that she can taunt the other children when theirs is gone, and at croquet she ignores the rules and tries to play by herself. 5. Describe the role women play throughout the novel The seemingly gratuitous details of the truck driver and the woman driver may intentionally suggest Steinbeck’s awareness that men are often destructive while women are usually more protective: Tom Joad has just been revealed as having committed manslaughter; later we shall see that Ma Joad and Rose of Sharon try to preserve the family and nurture life.

Ma Joad would be womanly and maternal in any station. If she had been a duchess, she would have labored with heroism for the integrity of the family and would have had a comprehensive vision of the serious social obligations of her class. The scene of her farewell to Tom… is of the pure essence of motherhood. The pathos is profound and free from a taint of sentimentality. The courage and devotion of the woman are sublime

In Ma Joad, Steinbeck created one of the most memorable characters in American fiction of the twentieth century. It is her courage which sustains the family through the almost overwhelming distresses suffered during their epic migration to the West. She voices the author’s belief in the common folk’s invincible will to survive. Ma is a tower of strength to her group, like Pilar in Hemingway’s For Whom the Bell Tolls though less articulate.

She is a kind of pagan earth mother, kind to her father-in-law and her mother-in-law, anxious to let her husband Pa lead the family but quickly assuming the reins when he lets them slip through weakness and lack of understanding, firm but sympathetic with her children, friendly with deserving strangers. Ma holds her family together far longer than anyone else in the group could have done. She suffers intensely when she sees Grampa die, then Noah disappear, then Granma die, and then Tom obliged to hide and then go away. But she almost never reveals the degree of her misery.

She knows that while she holds, the unit will hold unless man’s inhumanity to man and nature’s indifference put pressure upon her which simply cannot be endured. She goads Pa into near frenzy, knowing that it will make him stronger. She threatens to slap Rose of Sharon at times, but when the poor, pregnant, abandoned girl needs comfort, Ma is there with it in full measure. She knows that she can rely on Tom, not Al. She lets Uncle John have money for one quick drunken spree, knowing that without it he might crack. 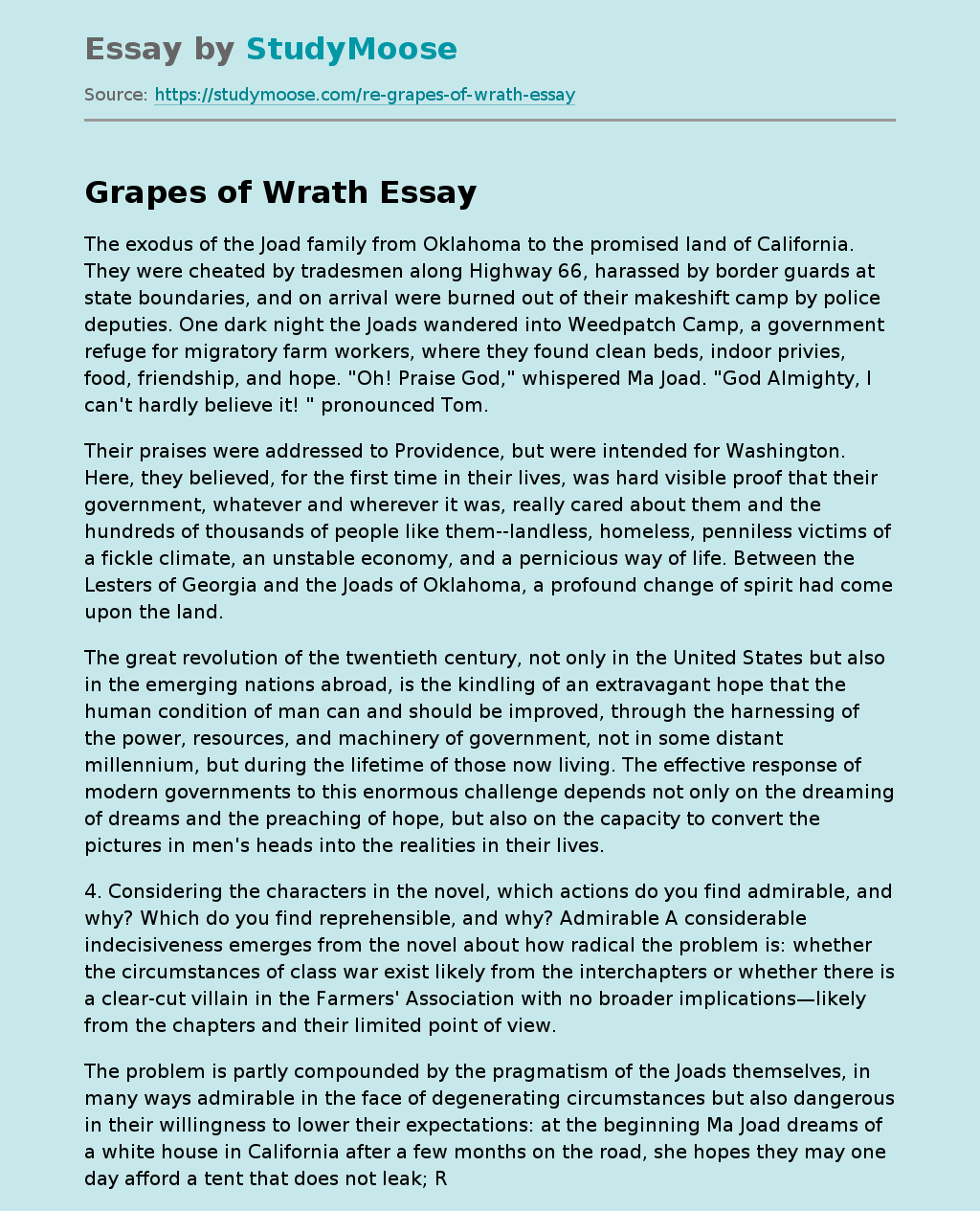