Pygmalion vs. My Fair Lady

The Academy Award-winning musical film My Fair Lady produced by George Cukor in 1964, was based on the play Pygmalion by George Bernard Shaw written in 1913. Although, the basic story line and underlying themes are the same, there are a number of differences between the two famous works. The most pronounced difference is that My Fair Lady had songs added to the dialogue. Furthermore, Pygmalion deals with many of the social issues that were occurring during the Victorian era in England, which is different from the musical which portrays what a person can do if they put forth a true effort.

Don't use plagiarized sources.
Get Your Custom Essay on Pygmalion vs. My Fair Lady Just from $13,9/Page

In My Fair Lady there is more emphasis on Eliza’s character developing her speech and going through all the unusual exercises’ such as speaking with marbles in her mouth and being hooked up to a machine while saying her vowels, than in the written play. This is probably due to the fact that in the play people should expect all of this to happen and don’t need to be told.

Also, Cukor’s My Fair Lady did this in the musical because it adds entertainment value.

After Mr. Doolittle is made into a wealthy man, which happens in both works, he marries his live-in girlfriend. In the play, he visits Mrs. Higgin’s before going to the church to get married where as in the movie he doesn’t visit her at all. The first point in the play when you find out that Mr. Doolittle has become wealthy and is going to get married is when Eliza goes back to the street where she used to live and sees her father coming out of a bar. That is when he informs her that he is getting married the next.

At the final test of Eliza’s improvement, the Ambassadors party, she meets the queen of Transylvania in the musical but she does not in the play. Actually, this entire scene is skipped in Shaw’s play. The end of the musical is open ended, leaving the readers to come up with their own ideas and feelings about what is going to happen next. Maybe Professor Higgins and Eliza Doolittle will live happily together like the myth that Pygmalion is based on, Pygmalion and Galetea.

Although there are many contrasting events that occur in the musical and in the play they do have many things in common. They have the same characters, although some are developed more in one than in the other. The basic thought and idea’s are the same throughout the musical and play which is expected since My Fair Lady is based on Pygmalion.

I enjoyed the musical more than the play because I feel like the musical went into a lot more depth of Eliza’s transformation. The songs and the actors in My Fair Lady really brought the story to life. For me, Rex Harrison’s portrayal of Professor Higgins was absolutely perfect; he was able to show more sides of Professor Higgins’ psyche than you could experience by reading the play. Pygmalion is the type of play that will never be forgotten, even though My Fair Lady is perhaps the most memorable movie based on Shaw’s play, there has been many other renditions, such as Pretty Woman, and there will probably many more made in the future.

Pygmalion vs. My Fair Lady. (2016, Aug 02). Retrieved from https://studymoose.com/pygmalion-vs-my-fair-lady-essay 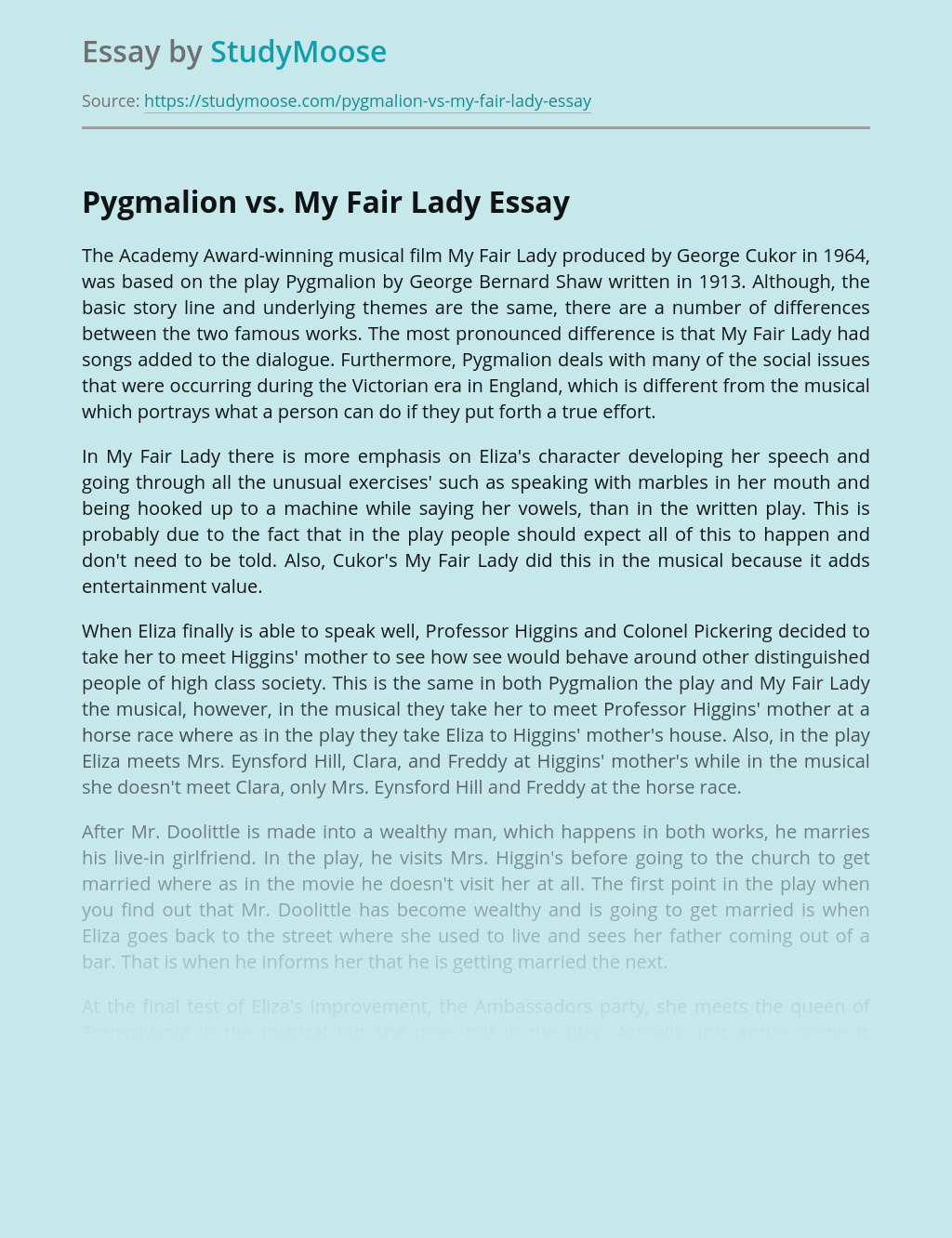 Theme of a Christmas Carol

Rate this post A Christmas Carol, by Charles Dickens, is a book that reminds all Christians of what inspires the holiday of Christmas and the good will that surrounds it. During the Christmas season, people tend to put their daily needs, selfishness, and working mindset aside for benevolence, friendship, and jubilation. In Dickens’ novel, Scrooge,...

The Life of Pi Algae Island

Rate this post It’s an island made entirely of seaweed, full of meerkats and freshwater ponds. It gets even stranger when dead fish rise to the surface of the ponds at night and disappear by morning. At first Pi thinks the island is a delusion, “I was getting used to my delusion. To make it...

Get Essay
The Gift of the Magi

Rate this post In the short story “The Gift of the Magi” by O. Henry I feel that there is more than one theme that can be seen through the story, that of love, giving and sacrifice. The theme in a story is a representation of the idea behind the story. (Clugston, 2010) The main...

A Thousand Acres vs. King Lear

Rate this post After watching both films, A Thousand Acres made in 2007 starring Michelle Pfeiffer, Jessica Lange and Jason Robards and King Lear made in 2008 starring Ian McKellen, Frances Barber and Kieran Bew, I decidedly liked A Thousand Acres much better. Mostly for it’s acting, and the modernism of the story line. (Although,...