One of the major social issues facing people in the early 20th century was the build up to World War One. This posed more of a threat to the lower class because if war had broken out they would have been the first to die in the trenches. This would have led to the lower class becoming dissatisfied with the entire class system. This social instability is shown by the conflict between people from different classes in George Bernard Shaw’s Pygmalion.

By showing conflict between the classes in his play, George Bernard Shaw is trying to show how pointless the class system is in the 20th century because of the advancements in social welfare.

Another important issue was the disparity between the number of educated and non-educated people living at the time. Really, it was only the middle classes who were educated because the upper classes could not be bothered. They did not have to. The lower classes simply could not afford it.

A hundred years later, the issue of everyone not having a fair chance of a decent education still remains. Overall, everyone has a better, much improved, education than they would have had a hundred years ago, but nowadays good jobs still demand a better education than a modern poor family’s money can provide.

The system is relatively similar; the more money available, the better the education. As for the issue of war, two wars have been fought since the play was written. Though now treaties and agreements and organisations have been devised to prevent war.

A modern audience might not fully understand or sympathise with the characters of Pygmalion because the issues George Bernard Shaw was trying to illustrate are not relevant in today’s society. For example, the class system has now disintegrated and people are no longer judged by their wealth.

The two characters I will be focussing on are Eliza and Higgins. In the play, Eliza is poor, has a lack of education and so is lower class. The only way she can make money is to sell the few flowers she can afford to buy from the market. Her dream is to work behind the counter and maybe even own a flower shop. “I want to be a lady in a flower shop stead of sellin at the corner… ” In modern times, people do not acquire flowers from the market and do not make an actual living by selling these flowers in street corners. In modern times Eliza’s education would have been a lot better without a doubt.

The education she would receive today would have been sufficient to put her behind the counter in a flower shop and it would have been sufficient for her to start her own business running a flower shop. This means that her ambitions would have to change if a 20th century audience were to fully understand and sympathise with Eliza. The fact that Eliza is lower class in the play would be a a hard problem for a woman director to overcome as the class system has steadily declined in importance since World War One called for almost all of the population to either go to war (men), or work in munitions factories (women).

Since all men were eventually fighting the war and all women were working in factories of helping the war effort in some other way, the class system was basically forgotten. Even if the class system did make some sort of recovery after World War One and start to come back into use it was certainly disbanded by the end of World War Two when the same scenario was repeated. The other character I will be looking at is Higgins because his situation would also have to change for an audience to fully understand what his character is like.

For instance, in Pygmalion Professor Higgins is a self-proclaimed bachelor. In today’s society bachelors are unheard of and if a man did proclaim to be a bachelor he would almost certainly be thought of as a homosexual or pathetic in the sense that he could not acquire a heterosexual relationship with anyone. Another change in society means that the director would have another problem. In the play, Higgins is one of the best, if not only, educated characters.

In today’s society this just would not happen. Since everyone now has an education, Higgins’ education might not be superior to that of someone in Eliza’s position. It definitely would not be superior in comparison with the Eyensford Hill family, as they have copious amounts of money and could afford the education. This would devalue Higgins’ character in that the other characters would not have the same respect for him and his intelligence that they have in the play.

Therefore, Higgins’ character would be devalued if the play were modernised. These are problems a modern director would face in making Pygmalion relevant to a 20th century audience. Small things in the play that are quite important to its success would have to be changed which would make the characters hard to sympathise with. Higgins and Eliza would be very difficult for a modern director to adapt for a modern audience. 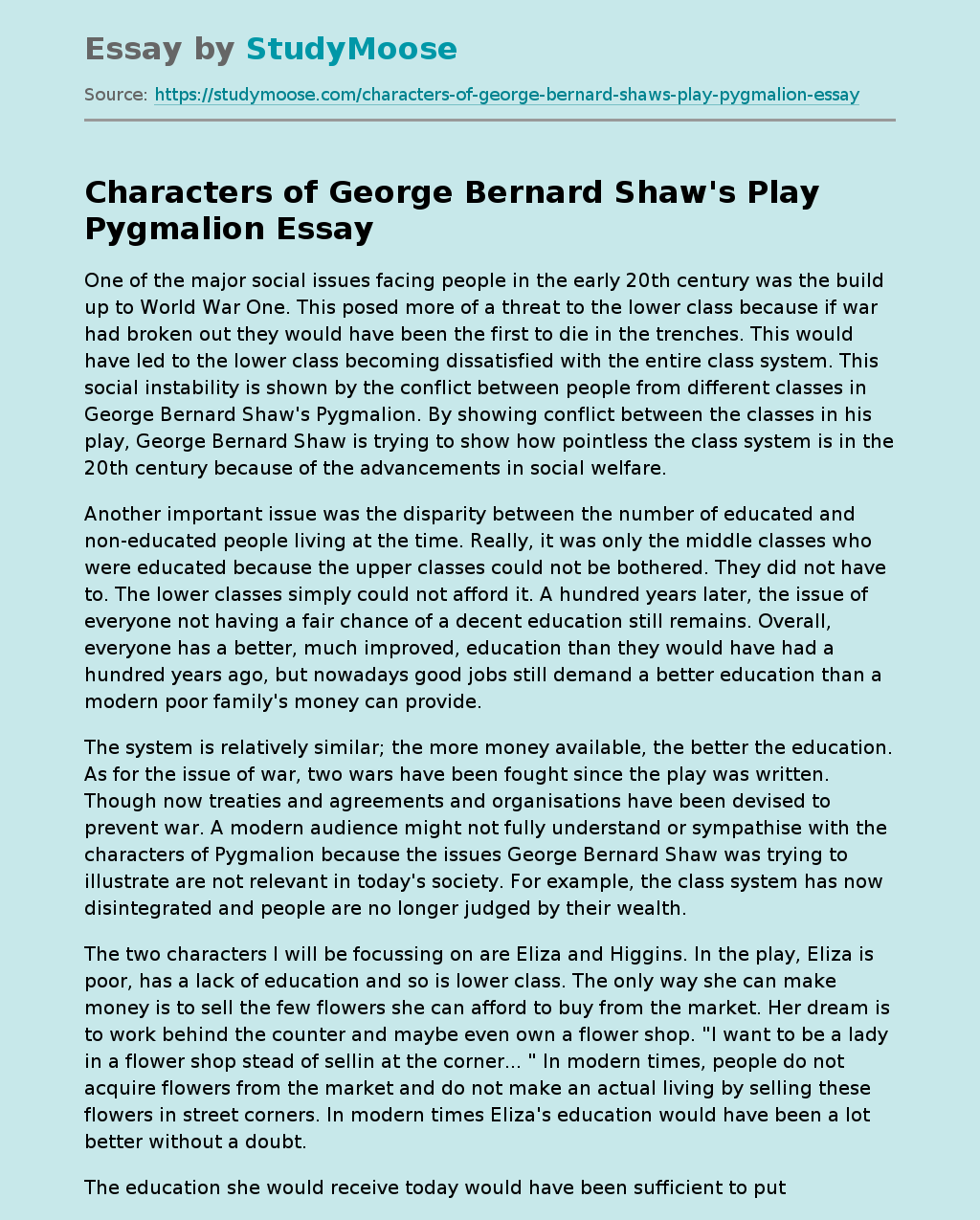