This study is commissioned to analyze the Purinex, Inc. financing plan, which is related to determine the best financing alternative for the company in securing additional cash needed to establish a partnership with a large-capitalization pharmaceutical firm. Gilad Harpaz, Purinex’s chief financial officer believes a partnership deal could bring the company to execute its mission, developing drugs for the treatment of sepsis and diabetes. However, the problem facing Purinex is that—while there is a chance for Purinex to secure a partner in the next four to twelve months, Purinex just has available cash to last around 11 months; furthermore, there is still a very strong chance that a different partnership would occur about one year later.

Don't use plagiarized sources.
Get Your Custom Essay on Purinex Inc. Case Study Just from $13,9/Page

In short, Purinex is now facing the challenge of the lack of capital to reach the partnership deals. According to the case, Gilad Harpaz is considering three options for Purinex to solve the problem. To help identify the feasibility and attractiveness of these financing alternatives, this study is based on the decision tree approach to evaluate the options.

As described in the case, firstly, the partnership deal would entitle Purinex to receive a combination of up-front fees, milestone payments, and royalties for the treatment of either sepsis or diabetes (see Appendix 1 for the detailed information). Secondly, due to the lack of capital, there are three financing options: 1) raising a one-time round financing from a Venture Capital (VC) firm, 2) simply waiting in the expectation that either sepsis deal or the diabetes deal would come through, and 3) undertaking another one-time round financing from a number of angel investors. It is needed to note that when Purinex seeks external funding investments either from VC firm or angel investing, the investors will acquire certain equity in Purinex (see Appendix 2 for the expected ownership percentage). Nevertheless, if Purinex chooses to maintain 100 percent control, it would lose the opportunity to secure a third-party partnership which is anticipated to occur about one year later.

The reason is that Purinex has only $700,000 cash on hand which is good only for around 11 months. It is important to note that this study is based on the following assumption—the combination of monies for each partnership deal will be received once Purinex successfully secures a partner. In addition, the probability of establishing a partnership with a pharmaceutical company for the wait-6-months option is estimated to be 25% since the achieved partnership chance for the next four to twelve months is about 75% (see Appendix 3 for the calculation).

Furthermore, the expected value (EV) for each financing option is derived from the calculation of the EV of the partnership deal, and it is based on the standpoint of the founder’s equity interest. As a result, the decision tree for Purinex’s financing plan is shown in Appendix 4. One can notice that based on the potential return and risk level, the financing alternative for waiting 6 months is ranked as the highest risk option in terms of offering the highest potential return. The reason is that Purinex does not have to share its earning with other parties. Thus, once the partnership agreement is reached, Purinex’s founders can obtain the entire EV of $325 million. However, the major risk associated with this option is Purinex has far less opportunity to secure a partner. While there is a 75% chance for VC and angel financing options to achieve the partnership deal, this option just has a 25% probability. Furthermore, the VC and angel financing options still have the other chance—a 95% probability—to secure a different partnership about one year later.

With regard to the VC option and the Angel option, it seems like the VC option provides a higher return for the sources of cash since this option just takes 3 months to complete the process and could offer Purinex $10 million, which enables Purinex to survive another 15 years. In addition, the VC option will improve 10% for the terms of either drug deal. However, this study would consider financing from angel investors is more feasible and attractive for Purinex based on the analysis of decision tree. The decision tree shows the fact that VC firms would require 40 percent of the equity in Purinex, resulting in the situation of having less EV. Perhaps the most important factor is that there is a very strong chance—a 98.75% possibility (100% – [25% * 5%])—that a partnership deal will come through during the following two years, and thereby raising $2 million form angel investors is quite enough for Purinex to secure the partnership deal.

In addition to the analysis of decision tree, there is still a qualitative consideration that has impact on structuring the decision. Indeed, with the external financing, the existing owners share composition will be changed that would trigger the control power issue and impose a significant number of restrictions on Purinex, including preferences for board appointments, antidilution rights liquidity, participation, and negative covenants. Therefore, choosing the angel option would offset this negative impact because Purinex’s ownership percentage will still be 89.74%, which is much greater than a 60% for the VC option.

Fundamentally, the goal of Gilad Harpaz is to seek the best financing alternative for Purinex in securing additional funds in order to accomplish the partnership deals and maximize the value of Purinex today. Based on the presented analysis of decision tree, a major finding of this study is that Gilad Harpaz should try to adopt and implement the angel financing strategy which has a maximum EV along with lower risk. However, with this strategy, the issue of dilution in the founder’s equity interest is still needed to be considered. In addition, in order to pursue the future growth, Purinex should try to employ the partnership strategy to generate more sales at a short period of time. Hence, this study believes, based on the decision tree approach, the best financing alternative for Purinex is financing with Angel investors along with the partnership strategy. 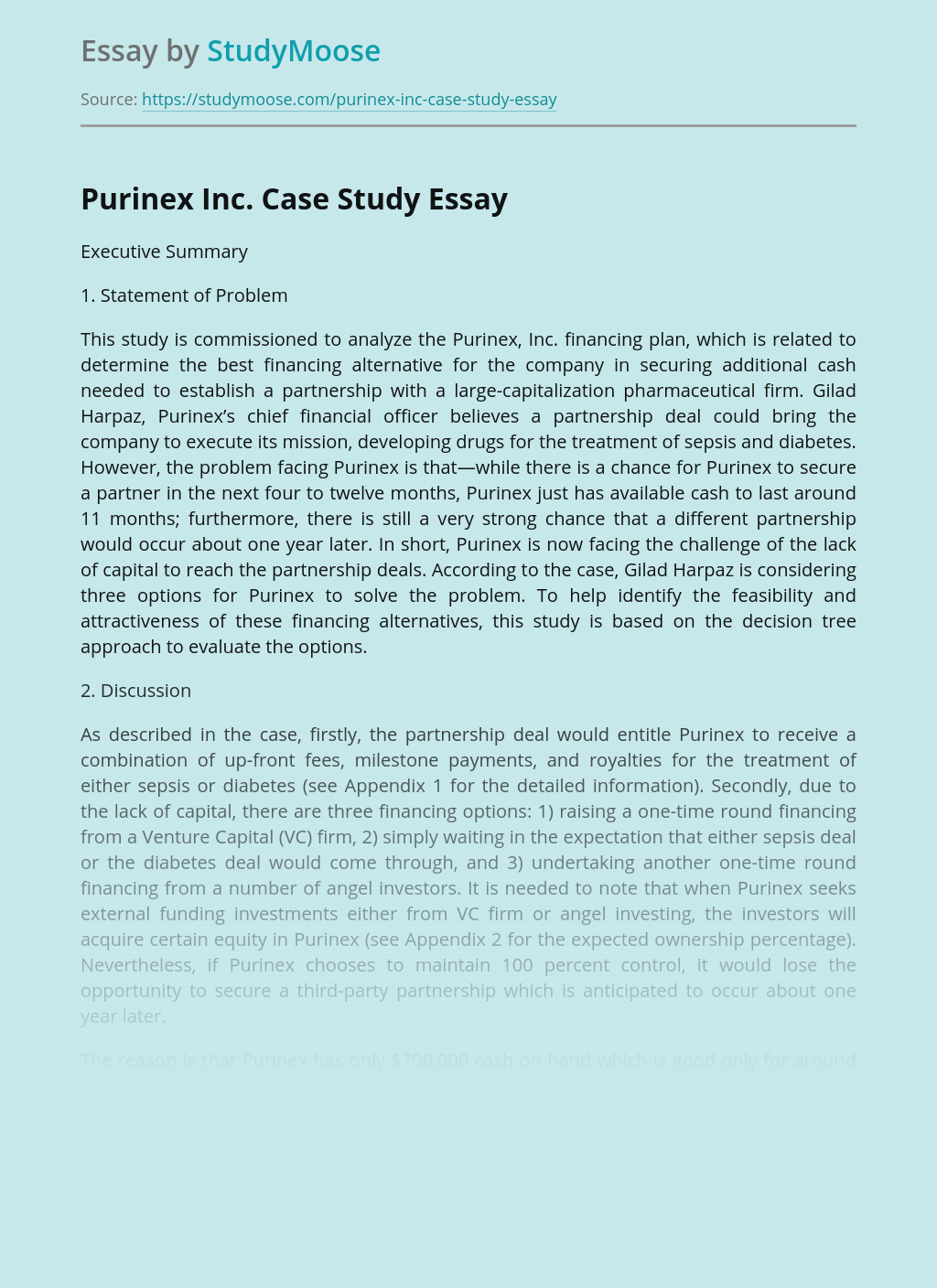 When we talk about different types of sentencing the most coming types are indeterminate and determinate. They both serve the same function but have different out comes. They are both build to serve as punishments but to also rehabilitate at the same time. The main difference between these two sentences is the fact that indeterminate...

In this essay I have selected 3 different theories, which will focus on human growth development theories, I will demonstrate my understanding of each theory and explain the psychological disturbances which are linked to each one and demonstrate how these theory can be off use to the counsellor in therapy. John Bowbly (1969) and Mary...

“The Fast and the Furious: Tokyo Drift” by Justin Lin is a film that allows viewers to attain a heightened level of understanding of the concept of belonging. It extensively explores the notions of separation, connection, displacement and acceptance throughout varying contexts to demonstrate that belonging carries different meaning to individuals. From the beginning it...

The Best Vacation Ever