Being a police officer is one of the hardest jobs around. They are trained and hired to “protect and serve” their communities and they are constantly in the public eye. Everything that they do is criticized by the people who are watching them. Like in every other profession, there are some who should really not be doing that job, and those people give a bad name to the really good and dedicated officers that work so hard to take care of people.

Don't use plagiarized sources. Get your custom essay on
“ Public Perception of Police ”
Get custom paper
NEW! smart matching with writer

One of the problems that cause the public to have a lower level of good will toward police is the rising crime rate. People believe that if there are more crimes being committed, the police are not doing a proper job of stopping it. This tends to make people doubt the abilities that police have. (Koenig)Some of the negative feedback in regards to policing comes from allegations of alleged cover-ups mostly applied to racial accusations, ethnicity and to some degree, economic class.

(Connolly, 2001) These issues are on a daily basis and over all that gives the public a negative view of the police force in general. The media has a big part in the negative viewpoint people have of the police. They tend to focus on the bad things that happen and although police are just human beings and do make mistakes, which is the only thing the media gives attention to so they get their viewers and readers to develop a negative attitude towards law enforcement. (Connolly, 2001) Another issue that is big in the news regarding law enforcement is that police are violent.

There have been occasions when police have used violence and in some cases it was unjustified. But those incidents are isolated and do not happen as frequently as the media tends to make people believe. Police will only use force when they are in danger and even then, they give the criminal every possible chance to surrender before force is used. If the media focused more on the positive things that law enforcement does for the public, more people would likely have a more positive viewpoint towards them. (Connolly, 2001)The public seems to be split on the viewpoint of law enforcement. Some are in agreement with a certain amount of force being used while the other half tends to believe that it is dangerous for the police to use any kind of force especially when it is related to racial, ethical or socio-economical issues. (Connolly, 2001) It is believed that media bias started back when there were issues regarding the Vietnam War and Civil Rights struggles.

Police are doing the best job they are able to do and it would definitely make their jobs easier if they had more support and backing from the people they are trying to protect. (Connolly, 2001)There are many times that the police have to get control of a person or of people and this can prove to be very difficult physically and also very dangerous to the police and to the person or people they are trying to control. Nobody wants to admit that that is the truth but unfortunately it is. Some people may believe that because of what they see on television either in a movie or from the news, if they do something to irritate any cop, they will be beaten for it and then made out to look like they are the ones who brought it on, whether they deserve it or not. And in most cases, no one deserves to be beaten. (Connolly, 2001)According to Stamper (2009), police do not pick bad officers, those bad officers are made. Even the most dedicated police officer who gets out of the police academy and is all fired up to get out and help people, can see his or her most respected superior beating on someone who really is not deserving of it and eventually turn around and do the same thing.

That is not legal of course, but if that officer is not caught then no one is going to know any better. Stamper had been an officer at one time and saw an officer he worked with whom he admired beating others. Basically, the power of being a cop got to Stamper’s head and he took advantage of that power until a prosecutor gave him a reality check. Stamper believes that the cops that have a conscience need to be the ones who take control of the bad seeds and assist with stopping police brutality. (Stamper, 2009)In February 2009, a Washington State Sheriff brought a “slender 15 year old girl” into custody, brought her into a holding cell and told her to remove her shoes.

As she was removing her shoes, she allegedly kicked one off and it hit the officer, Paul Schene, in the shin. This was not done intentionally, but the officer became enraged and began to beat the girl. He kicked her, pulled her hair and put his knees into her back, as well as “slugging” her. All of this was caught on camera. (Stamper, 2009) Throughout the incident, the girl gave no resistance and after it happened, she was handcuffed and brought out of view of the camera. Later on the girl said she was having trouble breathing and paramedics were called. Officer Schene said only that she had a panic attack.

Incidents such as that one are what the public are afraid of and what gives good cops a bad name. It is reported that the incident with that girl is ranked just as bad as the Rodney King beating and the attack of Abner Louima. (Stamper, 2009) When those incidents become public knowledge, law enforcement needs to scramble to find a reason behind what they did. Often times that is not possible and it makes the public’s already tainted point of view even darker.

It is really important for police to communicate with the public and make them aware of things that they did not already know. Perhaps if the public was more aware of things that the police did behind the scenes, they would be more apt to trust in law enforcement and not be so judgmental or critical of them. In some ways, yes citizens do have valid reasons for being so concerned about certain things they hear on the news or read in the papers. But a lot of times, stories may be exaggerated and that will make people worry for no reason.

In regards to policing and racism, there are some instances where race does come into play when police are working on solving a certain crime. An example would be a crime family under investigation for any number of crimes. Typically, that particular crime family will only allow certain people into their group and those people are all from the same type of ethnic backgrounds. Another example would be someone like a rapist or serial killer. If they have an eye witness to the crime, they will be able to conduct their investigations based on the witness’s description. The suspect may be of one race or ethnic group and therefore, the police must keep an eye out for people who fit that description. That cannot be considered racial, although people will still say that it is. (Connolly, 2001)While not everyone will agree that the police are not shady and are giving people breaks that do not deserve them, everyone should agree that in the case of an emergency, it is nice to know that they have someone around who will be able to assist them.

It is important for the public to know that they have help when they need it. Sometimes, police will offer a professional courtesy to a fellow officer and when the public gets wind of that, chaos breaks. Most people will not agree that police officers should not be punished for a crime that a civilian commits and gets punished for. This makes the general public very angry and then they think they are not able to count on the police when they really need to. Law enforcement also needs to remember that if they are going to allow a member of their own force to get away with someone and then they find a citizen who commits the same crime, such as drunk driving, if that person knows that the cop got away with it, they will expect the same treatment. That is a valid argument for them to have.

In closing, law enforcement really is there to protect and serve. That is their job and 99.9 percent of those people love what they do. Civilians need to understand and accept that. 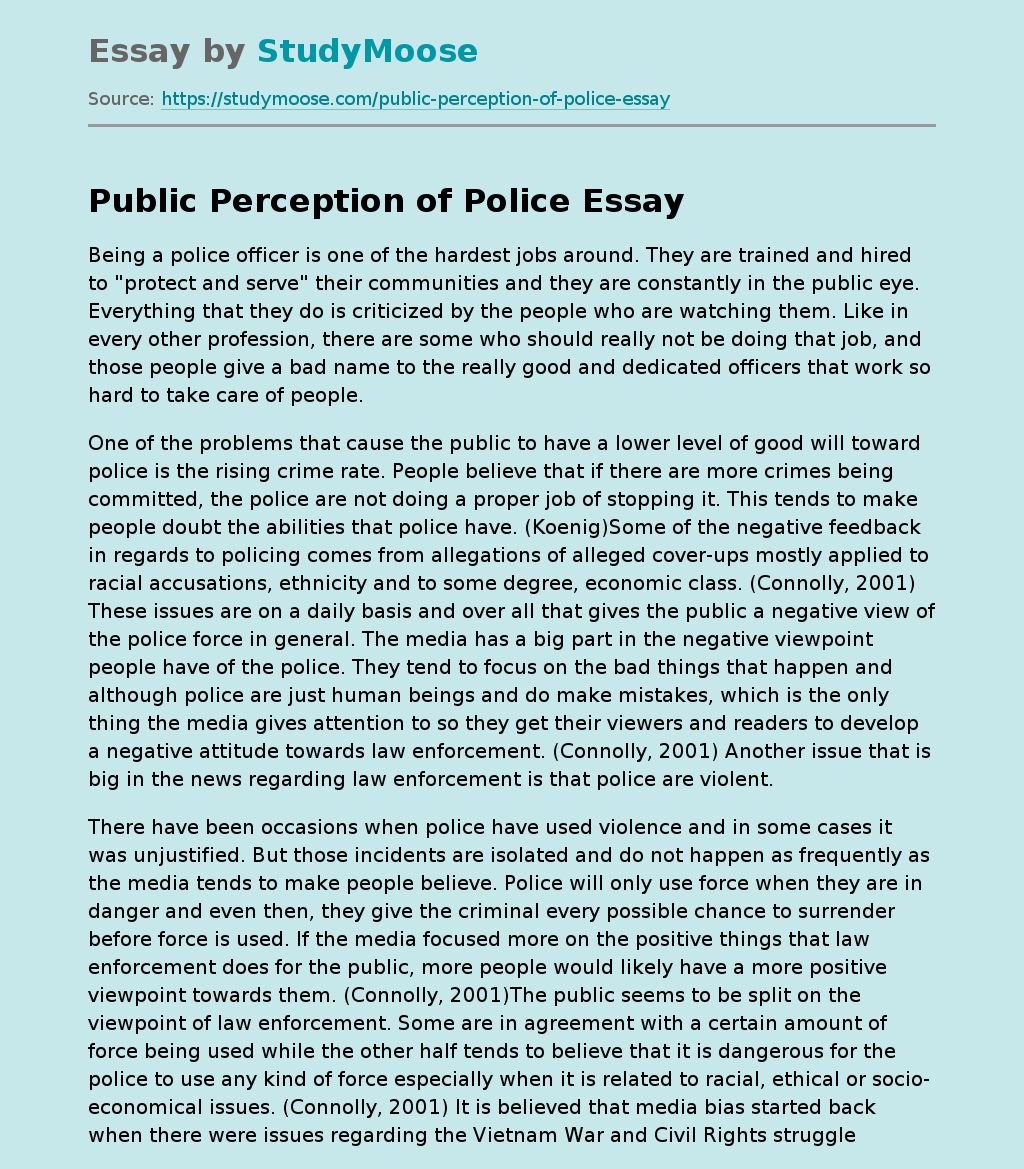