Pro and Cons for Electric Car

The most obvious advantage of electric car batteries is that they don’t produce the pollution associated with internal combustion engines. According to the Electric Vehicle Association of Canada, or EVAC, even EVs recharged from coal-powered electric generators cut carbon emission roughly in half. EVs recharged from cleaner forms of electrical power generation, such as hydropower and nuclear plants, can reduce carbon emissions to less than one percent of those currently produced by internal combustion engines. So, even in the worst case scenario, cars operated by EV batteries are cleaner than gas-powered cars.

Don't use plagiarized sources. Get your custom essay on
“ Pro and Cons for Electric Car ”
Get custom paper
NEW! smart matching with writer

Another important advantage of battery-powered motors over gas-powered engines is the lower cost of the fuel — that is, electricity for EVs and gas for the internal combustion engines. The United States Department of Energy has calculated that a typical EV can run for 43 miles on a dollar’s worth of electricity. Only a substantial drop in the cost of gasoline could give gas-powered cars anywhere near such a low cost per mile.

Yet another advantage of these rechargeable batteries is that they recycle well. Almost 100 percent of these batteries can be recycled, which keeps old batteries from becoming a disposal problem.

Electric motors have very few moving parts and don’t need fluids such as engine oil, anti-freeze or transmission fluid, so they require relatively little maintenance and are far less likely to leak. Excellent reliability means down time is less likely, too. EVs also run far more quietly than their combustion-powered counterparts which enhances worker health and comfort – a smart move in an era of rising medical costs.

The major disadvantage of battery-powered cars is the time required to recharge the batteries.

With lithium-ion battery technology, a fully charged EV can travel a distance comparable to an internal combustion engine vehicle with a full tank of gas, but it still needs to be placed on a recharger at the end of that time. At present, this means a drained EV will be out of service for several hours before it’s fully recharged. In the future, faster recharging technology may become available, but in the near term, electric cars won’t be the vehicles of choice for long trips. Another disadvantage of electric car batteries is their weight.

Because they need to do more than traditional car batteries, electric car batteries need to be linked together into arrays, or battery packs, to provide additional power. These collections of batteries are heavy. The lithium-ion battery pack in a Tesla Roadster weighs about 1,000 pounds (453. 6 kg). That’s a lot of weight to carry and it can greatly reduce the car’s range. However, the designers of the Roadster have offset this battery weight with a light frame and body panels. The entire car only weighs 2,690 pounds (1220. 2 kg) — not terribly heavy when you consider that more than a third of that weight is battery.

Electric cars are a lot more costly than gasoline powered cars within the same range. The Nissan Leaf clocks in at up to $33,000 and the Volt is estimated at $40,000. Both are outrageous priced for hatchbacks with limited room. What? s more, insurance rates will be estimated to be higher for electric cars than gas powered cars due to the danger of running out of power in a bad spot, its higher cost, and the dangers associated with electricity. Lastly, maintenance costs as a result of new technology and developing skills between mechanics makes electric cars even more of a costly proposition.

Electric engines will be forever the gas engine? s ugly cousin, with top speeds maxing out at 70 mph (even less for smaller electric vehicles) which make them a poor bet with highway driving. Out running a car to make a quick lane change is going to be a hard bet. Adding to the aggravation of running out of power on the road, it is very difficult to find plug-in stations when driving an all-electric vehicle. Some parks, stores and rest stops have these charging stations, but the driver must do extensive research to find them. Some stations charge you to use the power source.

Advantages And Disadvantages of Electric Vehicles

Almost all households in this world uses a gas powered vehicles which causes the greenhouse effect or more known as the global warming. The global warming itself is caused by the emission of the gas powered vehicles. To prevent this, technologists have invented a vehicle that uses electricity. Although there are many benefits, in a developing countries, owning and using an electric car results in having both advantages and also disadvantages. The first noticeable advantage is of course the no gas emission from electric cars.

Electric cars use a battery that is charged in most homes and businesses. The battery is charged in a charging station and usually lasts for approximately a maximum of 100 miles. ” As of 2013, networks of charging stations are being built in major developed countries. While many of charging station networks can handle multiple vehicle types, and may be provided by or partially supported by local governmental authorities, some companies are providing proprietary charging networks.

An example of the latter is the Tesla supercharger network provided by Tesla Motors which, in June 2013, announced an upgrade of their stations to become “Tesla stations” which would also support under-two-minute battery swaps for the Tesla Model S. ”. Using an electric car will dramatically reduce gas emissions that cause the greenhouse effect and air pollution. This will later on control our dependence on oil. “Powering a car on electricity would result in 93 percent less smog-forming volatile organic compounds and 31 percent less nitrogen oxide emissions than powering a car on gasoline” The second advantage is the fuel economy.

The first one is, as stated above, the limited amount of distance. An electric vehicle can only last for a maximum of 100 miles. Imagine if the user needs to go on a long trip, or even when the user is trapped in a traffic jam “the fear you’ll run out of juice when you’re nowhere near a charging station. ” Secondly, the building that charges the electric vehicles needs a lot of power. Some countries use solar panel for charging EVs. But some countries will have a hard time supporting it since solar panel is expensive.

Thus they use coal power plants for charging the EVs. It is an irony where electric cars, that is made for reduce the amount of gas emission and global warming, will end up making gas emissions from the power plant. “But you’re just burning coal instead of gasoline in your electric car–so how’s that any better? ” In conclusion, using an electric vehicle can have advantages and disadvantages. Some people still prefer to use gas powered vehicles and some prefer to use electric vehicles.

In the end, it is up to them to decide which one is best for them since it depends on their situation. For example, if they need to travel far, then it is no choice for them to use a gas powered vehicles. In the end, the advantages are the no gas emission, fuel economy while the disadvantages are the limited amount of distance, and the misconception of power plant.

Pro and Cons for Electric Car. (2016, Sep 16). Retrieved from http://studymoose.com/pro-and-cons-for-electric-car-essay 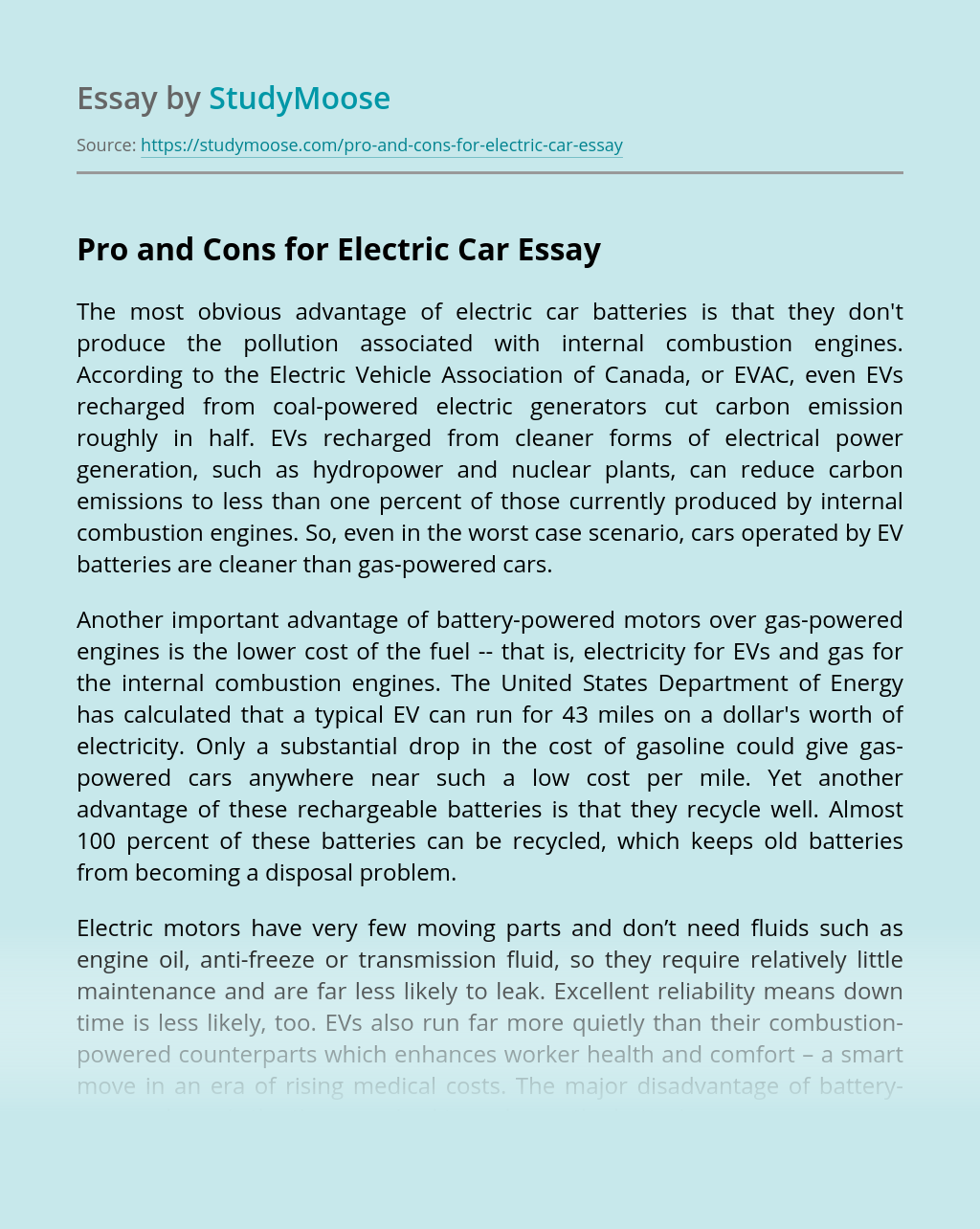