Principles and Practices of Management: a Step by Step Guide

Planning is the determination of the course of the objectives of a business, division or department to achieve maximum profit effectiveness, the establishment of policies and the continuous seeking and finding of new ways to do things. Implementing applies to the doing phases. After plans have been prepared, personnel must be selected and assigned their jobs; they must be trained and motivated to perform properly. Activities must be implemented in terms of the plans initially developed. This may include I. Selecting personnel

II. Training personnel
III. Motivating personnel
IV. Delegation,
V. Direction
VI. Coordinating.
Controlling refers to the evaluation of the performance of those who are responsible for executing the plans agreed upon. This may include: I. Controlling adherence to plans, and
II. Appraising performance

The worker always works on the same matters, the manager concerned always with the same matters; acquire an ability, sureness, and accuracy, which increase their output’. Each change of work brings in it training and adaptation, which reduces output. Thus, division of work can be applied at all levels in the organization. However, he has recognized the limitations of division of work and has advocated that experience and sense of proportion will decide the extent to which division of work can be utilized fruitfully.

3. Discipline:
All the personnel serving in the organization should be disciplined. Discipline is obedience, application, energy, behavior, and outward mark of respect shown by employees. Discipline can be classified into two types: self-imposed discipline and command discipline. The former springs form within the individual and are in the nature of spontaneous response to a skillful leader. Command discipline stems from a recognized authority and utilizes deterrents to secure compliance with a desired action, which is expressed by established customs, rules, and regulations. The ultimate strength of command discipline lies in its certainty of application.

6. Subordination of individual to general interest:
Command interest is above the individual interest and when there is conflict between these two, the common interest must prevail. However, factors like ambition, laziness, weakness etc. tend to reduce the importance of general interest.

7. Remuneration of Personnel:
Remuneration and methods of payment should be fair and provide maximum possible satisfaction to employees and employers.

9. Scalar Chain:
There should be a scalar chain of authority and communication ranging from
the highest to lowest positions. It suggests that each communication going up or coming down must flow through each position in the line of authority. It can be short-circuited only in special circumstances when its rigid following would be determined to the organization. For this purpose, Fayol has suggested ‘gang palnk’ , which is used to prevent the scalar chain from bogging down action.

10. Order:
Both material order and social order are necessary. The former minimizes lost time and useless handling of materials. The latter is achieved through organization and selection.

11. Equity:
In running a business a combination of kindliness and justice is needed. Treating employees well is important to achieve equity.

12. Stability of Tenure of Personnel:
Employees work better if job security and career progress are assured to them. An insecure tenure and a high rate of employee turnover will affect the organization adversely.

13. Initiative:
Allowing all personnel to show their initiative in some way is a source of strength for the organization. Even though it may well involve a sacrifice of personnel vanity on the part of many managers.

14. Espirt de Corps:
Management must foster the morale of its employees. “Real talent is needed the coordinate effort, encourage keenness, use each person’s abilities and reward each one’s merit without arousing possible jealousness and disturbing harmonious relations”.

Techniques of Effective Coordination
The basic objective of all managerial functions is to get things done by coordinated efforts of others. Thus, every function leads to coordination.
However, following are the specific techniques for achieving coordination: Coordination by Chain of Command:

In an organization, the chain of command is the most important methods of coordination. Superior, because of his organizational position, has the authority to issue orders and instructions to his subordinates. Weber has indicated that in a controlled administration coordination is achieved. Coordination by Leadership:

Leadership brings individual motivation and persuades the group to have identified of interests and outlook in group efforts. Ordway Tead has stated that top management should practice leadership because without it, no coordination can be achieved. In fact, whatever is necessary for effective leadership is also required for coordination. Coordination by Effective Communication:

Communication helps to developing understanding between individuals or groups among whom coordination is to be achieved. Through communication, every person understands his scope and limits of functioning, authority and responsibility, and relationship with others. Thus, effective communication provides horizontal as well as vertical coordination if there is free and adequate flow of communication in all directions.-horizontal, vertical, upward and downward. Communication to be effective does not require only a communication network but to keep the network free from any barrier, which effects flow of messages adversely. Coordination by Committees:

In some organizations, special coordinators are appointed for coordinating some special activities. For example, in a particular project, along with various functionaries, a project coordinator is appointed. His basic function is to coordinate various activities of the project and to keep information about the development of project so that he can provide it to the party concerned for which the project Is being completed. Such projects are generally taken on contract basis which are to be completed within the specified time. Self-coordination:

This principles states that a particular department affects other departments and in turn is affected by them. However, this department has no control over others. In such a case, if other departments modify their actions in such a way that this affects the particular department favorably, self-coordination is achieved. This requires effective communication across the department so that they are able to appreciate the functioning of related departments. However, this method is not free from limitations and shortcomings, and in the organization, favorable climate and environment need to be created for self-control.

Features of an Open Door Organization
1) An open door organization is task oriented. The accountability is clearly defined. 2) The authority (within the related functional area) is also absolute (or nearly so) matching the absolute character of the accountability. 3) Consultations are minimum and are not compulsive; the executive is free to consult and communicate (or otherwise) so long as he performs and delivers the objective. 4) Rules and procedures exist but only as guides-the executives (within their sphere of responsibilities) having wide freedom of discretion to depart from the rules within the periphery of the broad corporate policies. 5) The accountability is clear-cut; objective is verifiable – in terms of cost, output target, time and profit. The means are (relatively) unimportant so long as the end is achieved. 6) The managerial behavior is highly flexible bending with lithe suppleness to the internal shifts in conditions and external maneuvers of the environmental zone of contract.

Principles and Practices of Management: a Step by Step Guide. (2016, Apr 10). Retrieved from https://studymoose.com/principles-and-practices-of-management-a-step-by-step-guide-essay 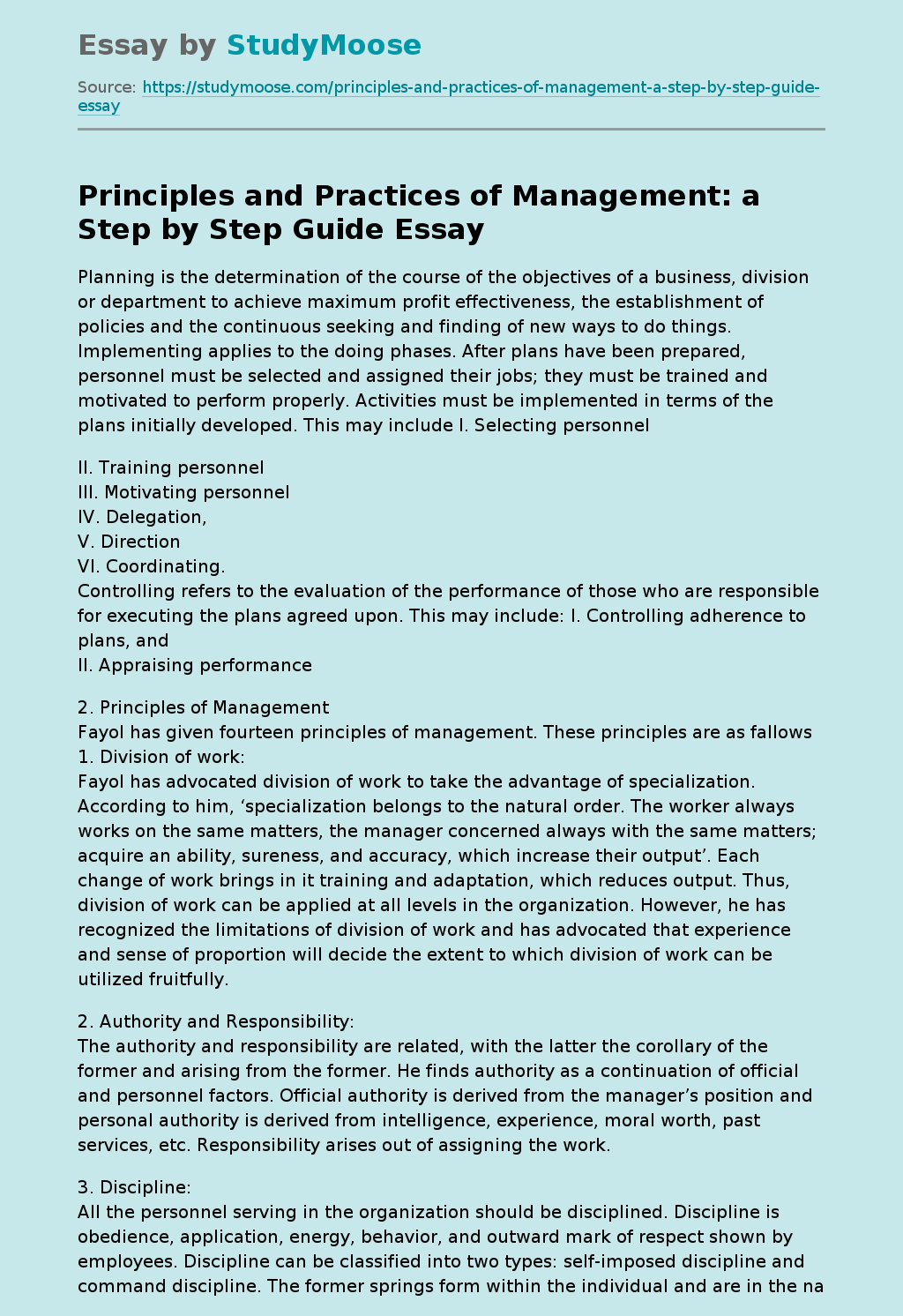