Privatized companies must overcome bad infrastructure, to create value in Primary and Support activities, and to extend the maximum market share.

In ice-cream industry, Ice-Fili’s competitor, Nestlé, built Nestlé’s own infrastructure during the 1990’s and Russian faced an enormous challenge.

90% of new equipment used for freezing and packaging in Russian market, but only $1.5 to $2m per complete production line. Not really improving.

Customers had 240 different ice-cream products! Yet to count substitute goods.

In Physical point of view, Russian ice-cream market contains different plants and fruits. This is also mention under point “rare” below in the same answer. Ice cream companies’ experiences long year’s industries, human resources of local and national knowledge such as culture, marketing, and human connections were under the competitive advantage.

For firms in Russian market, long ice cream brands were already enjoying reputation because some reputable brands were household name such as Lakomka.

Despite that is devaluation in Russian Rubles, which is a great opportunity to enter ice cream market in Russia in lower cost.

Tailor made Ingredients. Russia has a huge area, which may grow some specific type of plant that cannot find in other countries. Those local plant and fruit could turn into local ingredients to make a unique ice-cream that could be found in Russia only.

In the Russian market, there were more than 240 ice cream products alone. For a market entrant, the barrier of entry is low because customers were not sticking to a particular ice cream brand and reject the others. Entrants needn’t imitate other brand and enter to the market. That was why regional ice cream market enjoyed growth.

Organized to be exploited by the firm

Russian market used to have a weak organizational infrastructure, neither in vertical and horizontal integration during 2002. Nestlé had formed a well infrastructure already but Nestlé couldn’t take entire integration in Russia market, there are still some room for companies can take on this opportunity to integrate horizontally and/or vertically at the moment, to grow on company’s economies of scale at this moment, rather than years later that all the market big boys fill up the ice cream industry, which increase barrier of entries.

Strategic Positioning Model – (refer to appendices on p.7) In appendices 1, Ice-Fili played board in Competitive Scope but played differentiation in Economic Logic. Despite Ice-Fili sold 6 Rubles and compete directly with some of Nestlé’s medium price products, for a medium size company with limited tangible resources, Ice-FIli unable to be a Cost Leader to compete with high economies of scale like Nestlé and local big companies. Ice-Fili had to prove its value.

Invest Eastern Europe and Germany Ice-Fili directors believed to take a ‘cash cow’ opportunity to produce dry ice and sell aboard. It was right as director aware substitute goods and lower switching cost of Buyers can threat ice-cream business. If dry ice aboard were Stars Market, of course it was worth to invest in; if dry ice was a Question Marks market, risk was much higher.; Furthermore, Ice-cream market and dry ice-market may not share the same technologies simply based on same freezing system, Ice-Fili needed to put more effort to control its business, plus taking care the tough ice-cream competition at the same time.

Ice-Fili improved some sufficiency that raised the bar barriers of entry from below: 1) It was right to restructure 117 salary levels to one under Corporate Organization & Structure, more cost flexibility & got rid of high fixed cost rigid system. 2) Production Invested $8m on advanced machinery with 90% used for freezing and packaging! To tackle significant 5.7% packaging cost was reasonable. It may spend too much on improve lower cost Freezing system but spent less than 10 % on production, let “Older generation equipment” produced 25% production capacity was obviously insufficient. Ice-Fili did not tackle high repair & maintenance cost.

Ice-Fili planned their Product range with 170 different ice cream plus 20 new products every year. That let buyer to have more choice was creating far less sufficiency on cost control. Under poor financial position in 2002, simply should focus traditional intangible brand Lakomka and other most profitable ice-cream!

Logistics by distribute products on time to all retail channels, replace 47% Retailers and Distribution costs.

Use cheap operated SMS to communicate freely with local marketers, to gather 1st hand market demand and relevant information, to build up Services by developing relationships. Then e-mail this “fount line” information to headquarters on regular basis. Differentiation- Position medium price product and try to Re-register Lakomka Register Lakomka- to become Ice-Fili’s unique product in the market. Not bond with leading Russian producers for joint advertising- The bond favor more on Russian big players rather than medium Ice-Fili. Bond’s decision may constraint the future benefit of Ice-Fili. Eventually, Ice-Fili could be destroyed by the bond, not by Nestlé. It is not worth to save 0.44% cost by joining the bond. Staging- Based on priority of financial resources inflow and outflow of time sequence as follows: Invest substitute products 1st as market growing->register Lakomka->forward integration->backward integration->Dry Ice Market abroad->Ice Cream theme park Economic Logic 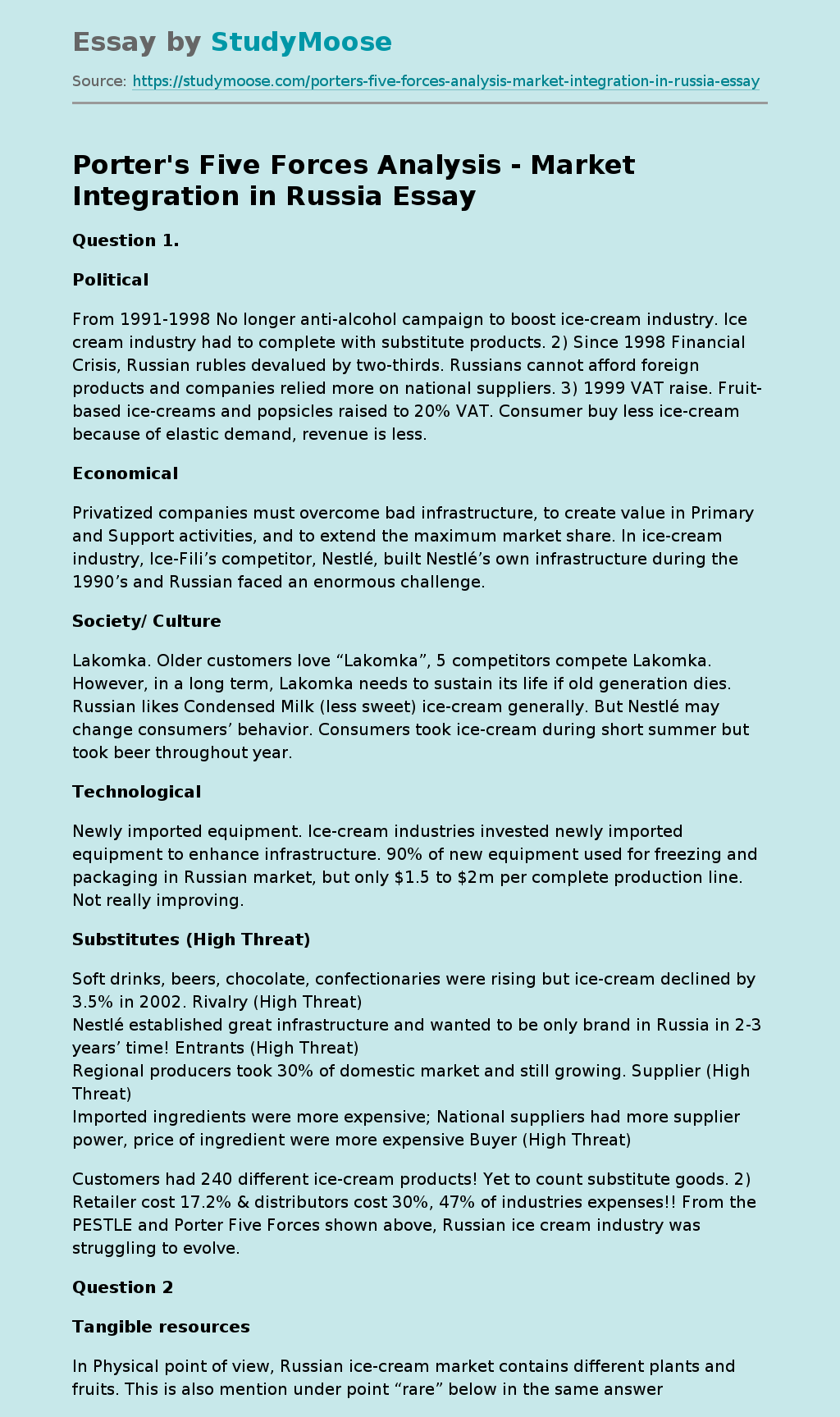