Poems are written by many different people, in many different forms. People have written poems about almost everything you could imagine. There is poetry written about everyday experiences, and the most exaggerated imaginations. Death is a form of poetry that I find very intriguing. Mostly because of the little we know about what happens after death. There is no answer to this question only speculation on what each individual believes happens beyond life. This is where poets use their imaginations to entertain us with what they see as life after death.

Don't use plagiarized sources. Get your custom essay on
“ Poetry Analysis ”
Get custom paper
NEW! smart matching with writer

This subject can have no limit because there is no way to prove or disprove any of their thoughts. Everyone thinks about death at one point it is an inevitable part of life. One we all have to deal with at one or more times in our lives, poetry can give us different perspectives of such subjects that are not always easy to deal with. I have chosen Emily Dickenson’s “because I could not stop for death”, and John Updikes “Dog’s Death” to analyze.

Both of these poems are about death but they are also very different and are told from a different point of view.

Emily Dickenson is well known for her poems about death. During the course of her career she has entertained her readers with a very unique view about death. Though each poem about death she writes has a different perspective, a different points of view or meaning, making them very interesting to read.

Emily Dickenson’s poem “Because I could not stop for death” is not in the traditional rhyme scheme that is usually associated with poems. This poem is written in iambic meter in quadrants, meaning that each stanza is made up of 10 syllables.

This particular type of “rhyme” is supposed to be subtle. The first time I read this poem I had a hard time understanding what I was reading. The poem is written in a unique way that I did not recognize. I had to read the poem several times and write myself some notes before I could piece it all together. From what I gathered the narrator of this poem is speaking to us from beyond the grave. The Narrator is “to busy to stop for death, so death would stop for her”. I felt like in this poem gave death a different persona than we usually see.

Death in this poem is kind of courteous when he was alone with her on the carriage leading her to her final resting place. Death also takes time for her by putting away her “labor and leisure”. Though the description of death were daunting and descriptive of what I would expect death to look like. This poem is a personal journey that she is taking when she realizes that she is dead and watching her own life pass her by on her way to her final resting place. She is pretty calm about the events that are taking place, hinting that either she has been dead for a while or she was aware that death was near.

Emily Dickenson is narrating this story as the dead through the course of her life. “Dog’s Death” by John Updike is another poem about death written in a very different point of view. This poem was written in a narrative point of view, which I think was a good fit for the poem. Typically narrative would be told as a story but it works well for this poem. Though both poems are told by the narrator in “dogs’ death” there is a show of emotion that is not seen in Emily Dickenson’s poem. Speaker reveals a lot about the nature of the situation by simple terms.

He mentions his children, and his wife. These terms make it easy for us to piece together the situation. These clues tell us that the writer is an older male; he is a husband and a father. John Updike uses terms like “surrounded by love” which gives the reader a way to relate. John’s poem was very cleverly written. John Updike wrote this poem with a limited amount of rhyme scheme but it is still very easy to follow. This poem caught my attention first because I am a dog lover and I can relate to the story teller. I think that this would be true for many of its readers.

The images of the narrator holding the puppy, and petting its fur, on the way to the vet show that the narrator is loving and compassionate. These actions are very powerful images that almost anyone can relate to. The words of this poem were easily translated into emotion then easily stored into the memory of the reader. The narrator tells a story about a family with a new puppy, and the family’s feelings surrounding the tragic event that just happened to their dog. In the beginning of the poem the narrator begins by letting the reader know some of the specifics about the story.

He tells us about the use of newspaper for training the dog, symbolizing that the dog is still a puppy. He tells of the family including a wife and children which gives depth to the loss of “family” member. There is also a little insight of what had happened to the dog in the very beginning when He says “she must have been kicked unseen or brushed by a car”. Then in the second stanza he states that the autopsy later revealed that she had a ruptured liver. This poem does not follow a traditional rhyme scheme just like Emily Dickenson’s poem.

Poems are sometimes distinguished by their rhyme scheme, and Emily Dickenson’s poem is a good example of how poetry can work even without a rhyme scheme. John’s poem follows a rhyme scheme but only in certain parts of the poem. Both of these poems are told with a beginning, middle, and end. Though, the perspective of these stories, are completely different. These are two poems about death that could not be any further apart. Emily Dickenson’s poem is told from the afterlife watching her life pass her by as she passes into eternity. This story is not particularly sad and I don’t think it was meant to be.

This story is told about a person who lived their life and was accepting that it is time to move on. Though this story is about death it is not meant to be sad or invoke those types of feelings. In John Updikes “Dogs Death” this poem is meant to be sad. This poem shows a connection with a family member. This family spent time training this puppy, and had developed a connection with the puppy. Both narrators in both poems use very powerful images to tell the story. The reader develops the story even more by telling of the children. This story is also more recent of a poem.

In Emily Dickenson’s poem they talk about a carriage, and in John Updikes poem they drive in a car to the vet. They are both written in stanzas using Quadrants. In the end I would have to say that Emily Dickenson’s poem is more sophisticated. I think that her poem shows more creativity and has a very unique point of view. I think that this poem does a very good job at making the reader think about what the narrator is trying to say. On the other side I think that John Updikes poem is one that can relate to the masses. John Updike chose to write about something that all of us can read and relate to.

I like this type of poem because it evokes emotion from you as you read. Both of these poems are about death but they are written in two completely different ways, telling two completely different stories, and that is what is great about poetry. References: http://www. gradesaver. com/emily-dickinsons-collected-poems/study-guide/section1/ http://www. shmoop. com/because-i-could-not-stop-for-death/analysis. htmlhttp://www. goodreads. com/topic/show/73624-nov-8-dog-s-death-john-updike http://www. online-literature. com/dickinson/ 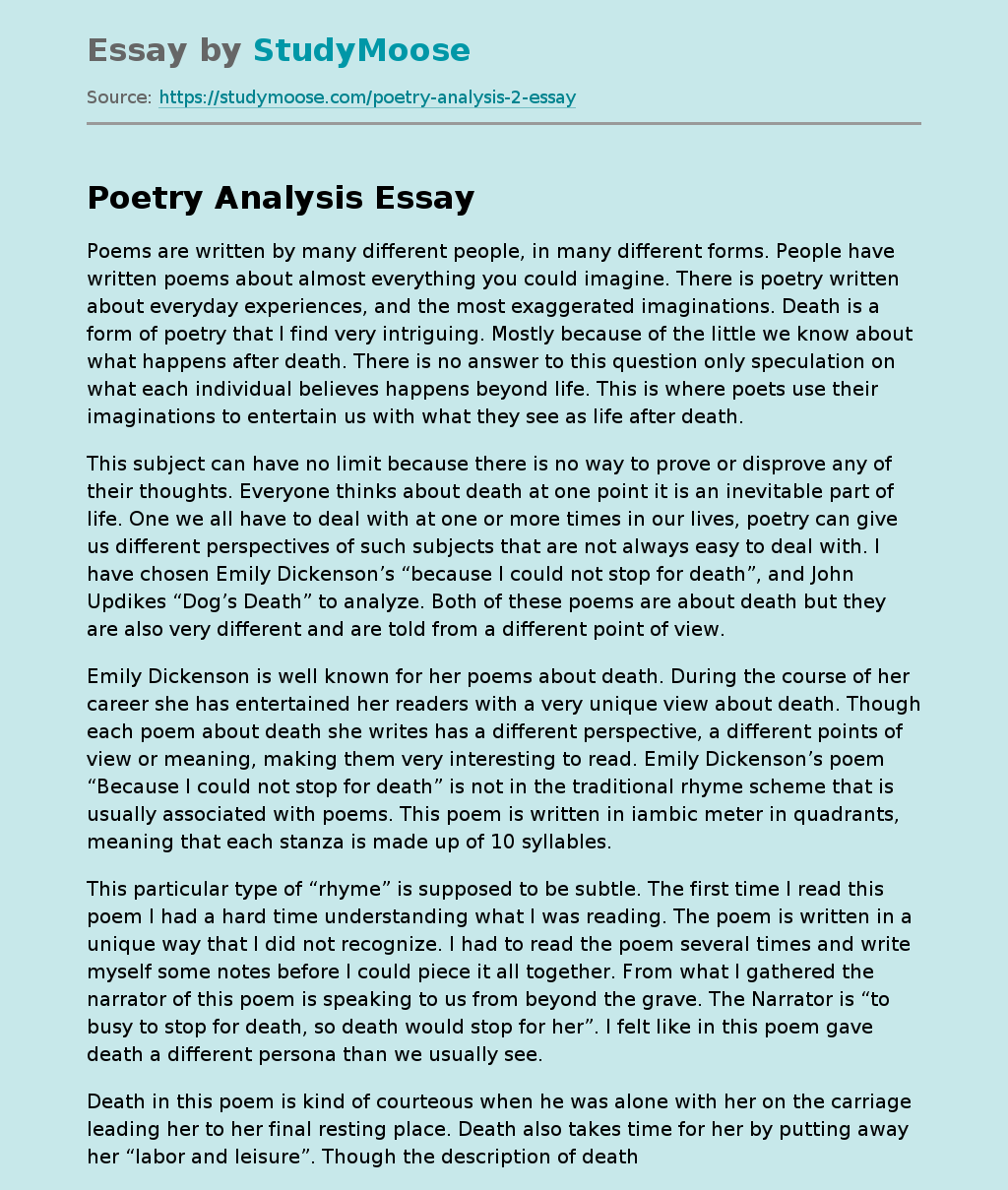