Pi Patel in "Life of Pi" by Yann Martel

Pi Patel is the son of a zookeeper in Pondicherry, India. He was named Piscine Molitor after a Parisian swimming pool that was frequented by a family friend. But when the school kids started calling him pissing, he shortened it to Pi which is also a number for the ratio of the circumference of a circle divided by its diameter. Pi is sometimes uncomfortable at school and incredibly happy at home, surrounded by a real wonderland. He learns that the zoo animals live by habits and, after satisfying their basic needs, repeating the same rhythms and rituals every day.

Don't use plagiarized sources. Get your custom essay on
“ Pi Patel in “Life of Pi” by Yann Martel ”
Get custom paper
NEW! smart matching with writer

However, change the routine in the slightest way, and the animals will express aggressiveness or move back to a safe place. He grows up knowing that he can’t assign human characteristics to animals.

In a very scary scene, Pi’s father shows that animals are wild creatures driven by their hunger and passions. He also teaches the boy how a circus trainer can control dangerous animals by taking the position of the alpha male, demonstrating his dominance and ability to feed himself.

This lesson will be extremely important later on. Pi’s parents are not inspirational people for religion. This Hindu teenager is also attracted to Christianity and Islam. Although he believes that Jesus’ ministry cannot withstand the exotic adventures of the Hindu gods, his message of love is very important. He began to meet with a Catholic priest regularly and asked for baptism soon. Pi believes that Islam is “a beautiful religion of brotherhood and devotion”.

After meeting a Sufi mystic at a market, he places a prayer mat in the garden across from Mecca and prays five times a day. However, once the local leaders of each religion find out what it is doing, they try to convince Pi that he has to choose one religion. But this passionate adolescent refuses to give up his multi-religious path of loving God.

All of this spiritual practice leads to a mystical experience, which felt like paradise for him. When Pi’s father decides to leave India and move to Winnipeg, Canada, he closes the zoo and organizes the distribution of its residents to other facilities. The family and some animals get on a Cargo ship. Then the boat sinks in the middle of the Pacific Ocean unexpectedly. Pi goes to a lifeboat where his only companions are a zebra, a hyena, an orangutan, and a Bengal tiger named Richard Parker. The sixteen-year-old looks horrified at the start of the animal dominance war, and where in the end only he and the tiger are left. Fortunately, he discovers survival supplies and a detailed survival script on the lifeboat. Pi sets up equipment to collect water, learns how to fish, and makes a raft for times when he needs to keep a certain distance from Richard Parker. Everything he has learned about animals gives him a hand during this challenging time.

In shark-infested waters where no land is in sight, Pi meets the needs of the 450-pound tiger. This section of Martel’s creepy novel is absolutely fascinating, a real adventure where Pi’s physical performance, intellectual courage and mental endurance are put to the test. They are facing a horrible storm in mid ocean which destroys his small boat. At that time, he starts questioning his belief speaking to ganesha but Pi doesn’t give up. During his trip, Pi practices religious rituals like single masses without priests or hosts of consecrated communities, darshans without murtis and pujas with turtle meat for the prasad, devotional acts for Allah not knowing where Mecca was and confusing it in Arabic. But these rituals help him against despair, loneliness and grief for his lost family.

The worst enemy is fear. He notes: ‘It is the only real enemy in life. Only fear can conquer life. I know he’s an intelligent and treacherous opponent. He has no decency, respects no law or convention, shows no mercy. It is about your weakest point, which it finds with absolute certainty. It always starts in your head. A moment when you feel calm, obsessed and happy. Then fear creeps in, which is disguised under gentle manners when in doubt, like a spy in your mind.” One of the things that makes Life of Pi such an extraordinary novel is that it handles so many fascinating topics with confidence. Martel gives an overview of animal behavior, survival at sea and the maturity of a teenager. The novel is a work of spiritual adventure and a tribute to the enormous imagination and diversity of storytelling.

The spiritual implications of the deep relationship that developed between Pi and Richard Parker during their joint detention were astonishing. At first the youngster is afraid that the animal eats him, then tries to make the tiger happy with food, fresh water and regular routines. He realizes that every negative thought was created by his mind and with the right strategy he will be able to survive. They are finally reaching Mexico and Pi thought they would have a deep relationship but Richard Parker goes into the jungle without saying goodbye. This devastates Pi because he thinks they have a friendship. This novel encourages us to think out of the box and even if it’s not accepted in our society why shouldn’t we be able to believe in more than one religion?

Pi Patel in "Life of Pi" by Yann Martel. (2020, May 02). Retrieved from https://studymoose.com/pi-patel-in-life-of-pi-by-yann-martel-essay 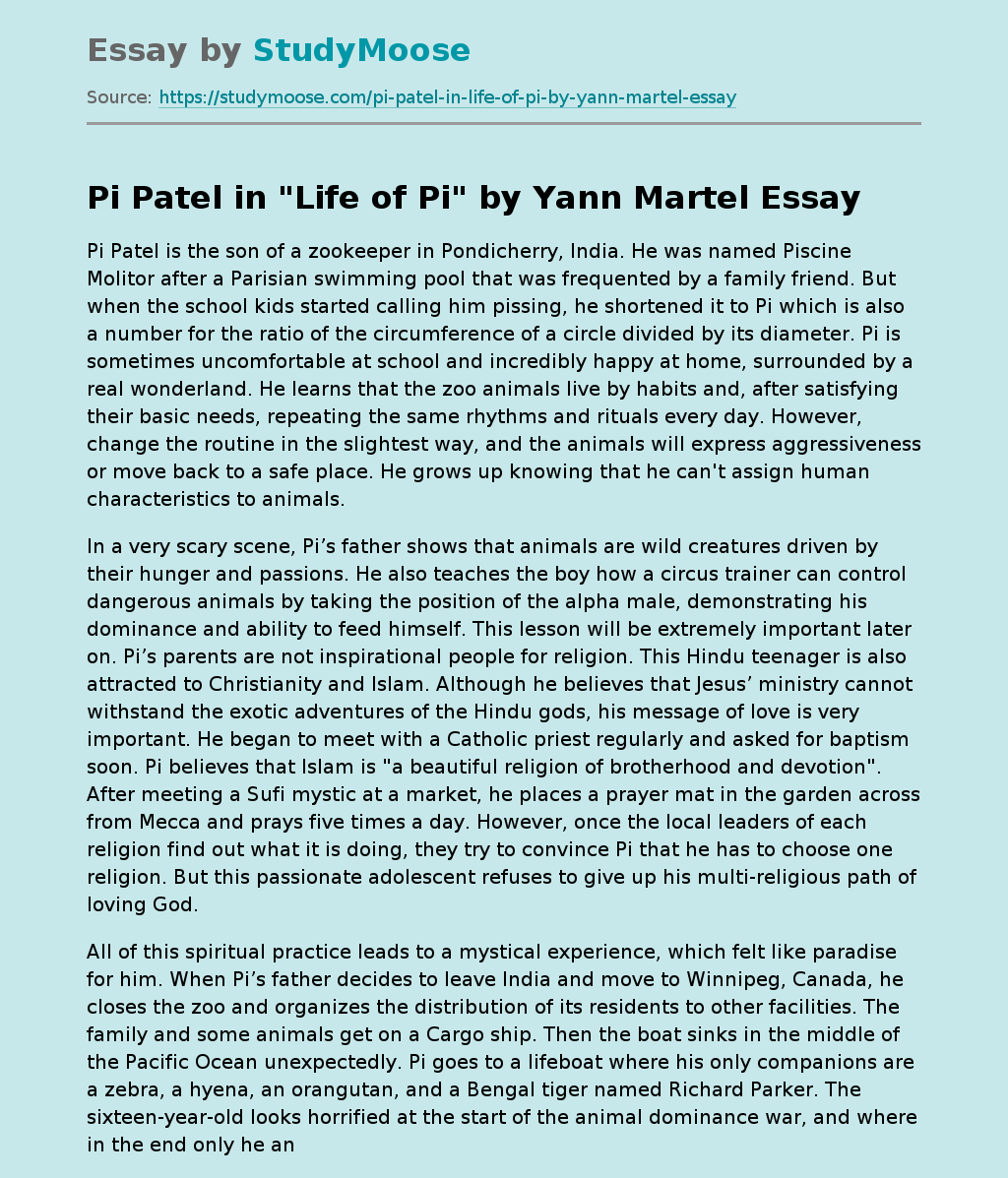