Don't use plagiarized sources. Get your custom essay on
“ Personality Case Study ”
Get custom paper
NEW! smart matching with writer

An example of a personality case study is that of Kate, a 20 year old university student. She is described as kind, caring and loyal and prefers watching movies and reading rather than going out to a party. Kate works hard studying psychology at university and volunteers to help children with autism. Kate has a strong relationship with her family and isn’t expected to contribute to household expenses. By examining the case study of Kate through the Learning and Trait personality theories, it is possible to have a greater understanding of Kate’s personality characteristics.

The Learning theory of personality is one theory that can be used to examine an individual’s personality. One of the most influential theorists in this area was B. F Skinner who believed behaviour people think reflects personality is simply behaviour that has been learnt from past experiences with the world (Fletcher & Garton, 2007). The theorists of the learning theory basically believe that if a person’s behaviour is positively rewarded, they are more likely to repeat the action.

However, if their behaviour was punished, it is less likely to happen again.

This theory has been criticised for being too simplistic by not taking into account a person’s genetics and factors other than a person’s environment (such as thought processes, beliefs and motivation) that can influence their personality. Another argument is that personality consist of more than just behaviour. However, the learning theory is still a very influential personality theory and Skinner’s findings are still widely used as the basis for behaviour modification techniques. In relation to the case study of Kate, Skinner would argue that Kate’s personality and behaviour is a result of both reward and punishment as a child.

For example, she works hard in her studies to achieve high results. It is possible that when she was younger, Kate’s parents rewarded her for achieving well at school or punished her for receiving a bad result. Skinner would argue that Kate demonstrates a solid work ethic because she was rewarded for similar behaviour earlier in her life. Another theory of personality that is commonly used is the Trait theory, studied by Costa and McCrae. This theory suggests there a five main dimensions of personality. These are: extraversion, neuroticism, openness to experience, agreeableness and conscientiousness.

An individual’s personality is a combination of high and low ratings in each of these dimensions. This theory claims that all these personality traits are stable and enduring. Some criticisms are that this theory isn’t specific enough as to how much of an individual’s personality is a result of genetics or environment. Also, this theory does consider unconscious thoughts and processes that may influence a person’s behaviour. The Trait theory is however a widely accepted personality theory which has been the basis for many studies and research. Costa and McCrae’s trait theory can be applied to the case study of Kate.

She is described as being kind, caring and loyal. Kate also prefers watching movies and reading rather than going out. In terms of the Trait theory, Kate would be described as being introverted, conscientious, hard-working and well organised. The Trait Theory and the Learning theory are two very different understandings of personality, both with their own contributions and limitations, but both are relevant and useful when trying to understand an individual’s personality. Each theory is applicable to the case study of Kate in attempting to examine her personality type. 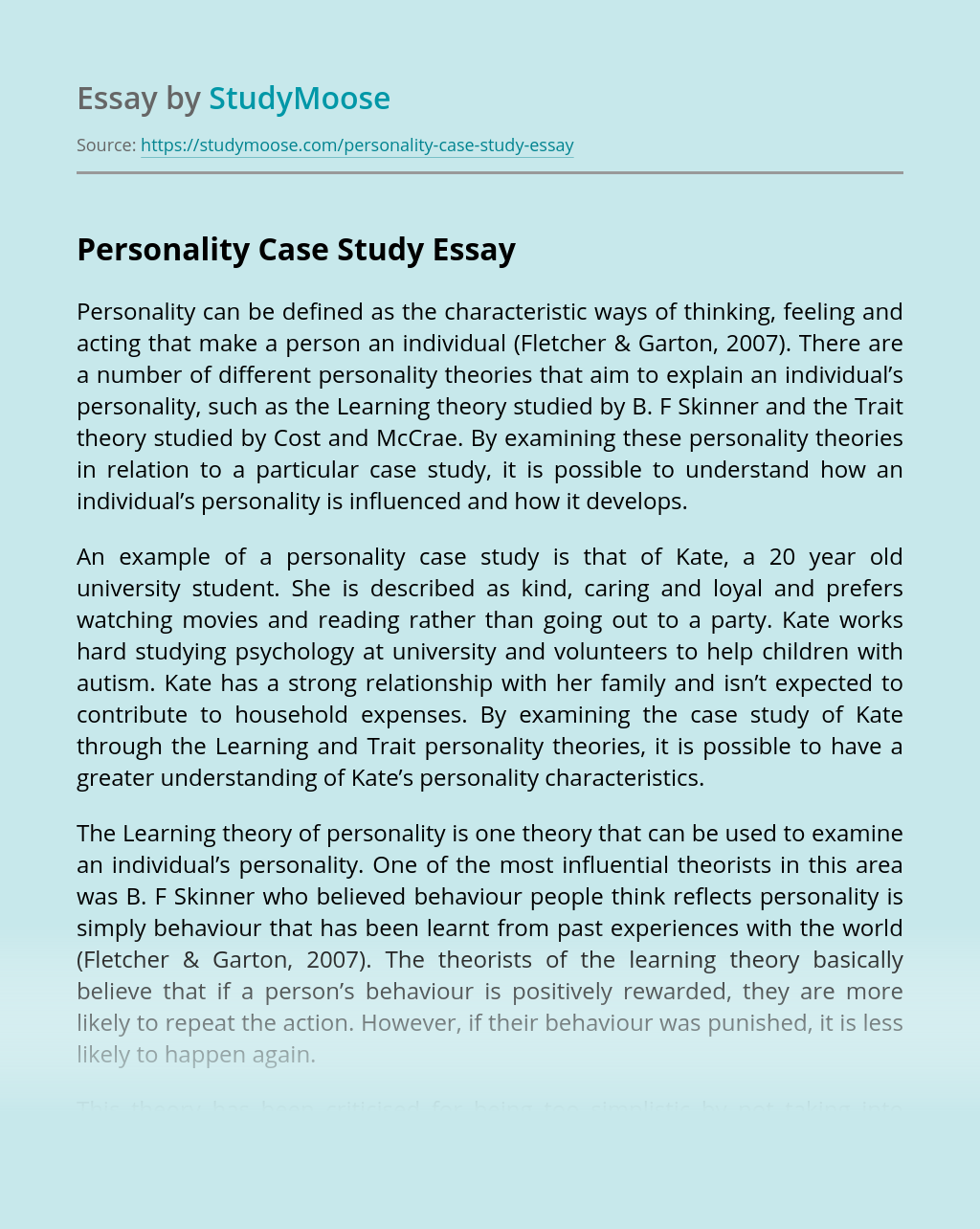