In the film Pleasantville, in the courtroom scene the black and white people are allowed to sit comfortably downstairs, where the ‘coloured’ people are made to stand upstairs on the balcony seperatly. Colour is used again here to show the differences between the two classes of people in Pleasantville. Also many novels are mentioned in ‘Pleasantville’ that are about segregation and black rights such as ‘To Kill a Mockingbird’ which is about the conformist divides in a town in Alabama in the 1930s.

Don't use plagiarized sources. Get your custom essay on
“ People in Pleasantville ”
Get custom paper
NEW! smart matching with writer

In Pleasantville, the ‘coloured’ people and their friends and people seen to be accosiated with them are treated badly by the ‘black and white’ people. A good example of this is when Bud’s mother, Betty was nearly beaten up by a group of ‘black and white’ boys because she is different and in colour. She is also a focus of attention for the black and white people as she became ‘coloured’ and stared in a nude portrait, and also a nude stained glass painting, which caused much contraversy in Pleasantville.

This idea of a segregated society in Pleasantville is fuelled by a very left wing (Nazi like) major, who decides that ‘colours’ are not to be tolarated and shows great dislike to them, especially in the courtroom scene where his own hatred of the ‘coloured’ characters turns him into colour himself. Without this change in colour, there would be no way in separating the two sets of people and the film would not be the same.

The last major use of colour in pleasantville is the way colour depicts the ‘perfect’ reality of the 1950’s black and white television programme and the ‘normal’ reality of everyday life in the 1990s.

Pleasantville is the ‘perfect,’ idealistic town with no violence, no traversities and no twists, just like the sitcoms of the 1950s. This is portrayed in black and white even though the characters in the ‘perfect world’ see it as colour, however it is not as vibrant as the colours that appear later in the film, one of the characters describes the colour introduced as ‘real colour’ as apposed to the dull almost boring set of Pleasantville.

When Bud and Molly-Sue (David and Jennifer in the world outside of Pleasantville) they appear in black and white. After a while, more modern, less idealistic elements are introduced to Pleasantville, in colour. A good example of this is sex, as before Jennifer (or Mary-Sue) came to Pleasantville no-one knew what sex was. After more of these ideals being introduced, more colour appears, first very subtly with a red rose appearing on a rose bush and then more boldly with Skip fully turning into ‘colour’ after having sex with Mary-Sue. As colour is introduced a sense of ‘normality’ appears and things begin to happen such as a tree spontaniously catches on fire (which is in technicolour) as a direct action of Betty masturbating in the bath. However the firefighters, not knowing what to do with a fire as the ‘perfect’ team have only ever had to rescue cats from trees. Eventually as ‘normality’ returns the whole of Pleasantville is submerged in colour.

Without the change from black and white to colour, ‘Pleasantville’ would not be the same film as it is today. Ross used both black and white and colour to portray differences between the two ‘clases’ of people living in Pleasantville. Without this technique, there would be no subtle way of symbolising this. It is surprising that the use of a small technique can create so much more depth in a film than if it is just in one colour. 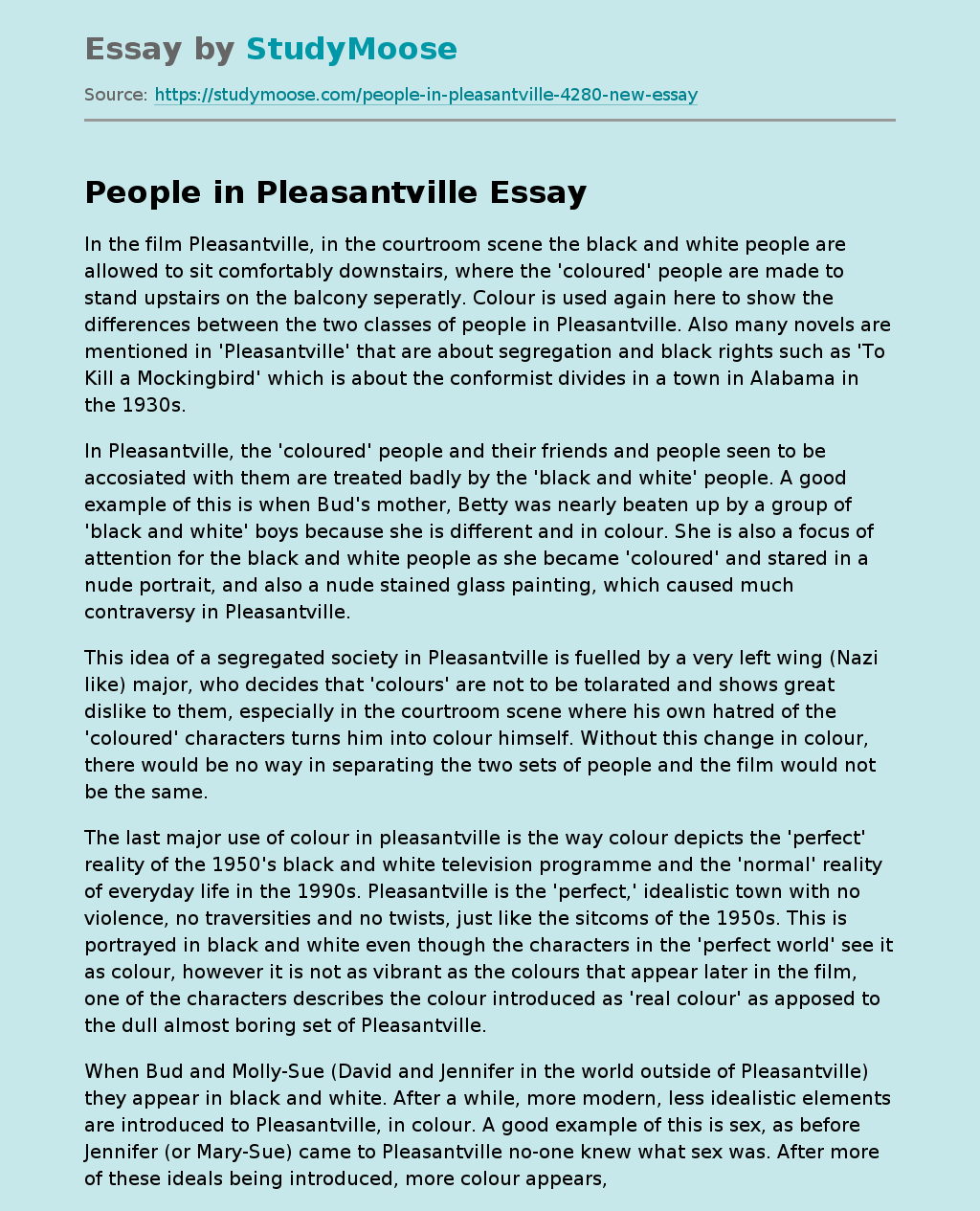