People should try to help other people that is why they have rescue team. Yes, they put their life in danger, but they know the risk before they even go out there. There are plenty people who want to help but only a couple of them do something about it. Some people help with taking them up the mountain and others help by rescuing them one person tried to make airplanes to go up there but sometimes the altitude is too thin.

Don't use plagiarized sources. Get your custom essay on
“ People should try to help other people that is why they have ”
Get custom paper
NEW! smart matching with writer

A reason people should rescue is because not all the time they are reckless in Why Everest it says that there are many reasons people died one is they go all the way up there, but they still must come down. Some are tired and don’t always watch their step and some are just trying to show off or trying to get it over with. Sometimes you stay up there to long and the low altitude and lack of oxygen gets you.

And sometimes there is bad weather, and you must go down icy slops of the death zone where you can’t stay for more than two days.

Another, reason is in Helicopter Rescues Increasing on Everest where a rescuer went to save two people. The two of the people were hanging off the cliff of Ama Dablam the helicopter had to fly up about 19,000 feet so the air is very thin. They could only bring one person down at a time they were both safely, but the plane crashed.

They say having helicopter gives people more of a security, so they do more dangerous things, but the professionals disagree they say there quick to dismiss the fact. But helicopters are the safer way to go it say that they attach a line on the helicopters, and they go close to the mountain they literally, pluck the person off the mountain or ridge.

Indeed, ranger’s life are put in danger but in Ranger Killed During Rescue of Climbers on Mount Rainier a ranger went to help four people two women and two men from Waco Texas. The two women were dangling inside the crevasse 13,700-foot level the rescue team was able to get there fast. The two women were pulled to safety the four people were injured form slipping and having force on their harness, but they were alive. The first ranger there died but his family said they were grieving and celebrating his life for saving and helping people. If we didn’t have rescuers all those people caught on the mountain world have died so yes rescuers died but they also save a lot of lives.

Which is why I believe people should be able to be rescuers it is them choose they know the risks. They put their life’s at risk so they can save people who climb up mountains for the trill or for fun. But they think what they are doing is good so they try to help, and I don’t think we shou

People should try to help other people that is why they have. (2019, Dec 02). Retrieved from https://studymoose.com/people-should-try-to-help-other-people-that-is-why-they-have-example-essay 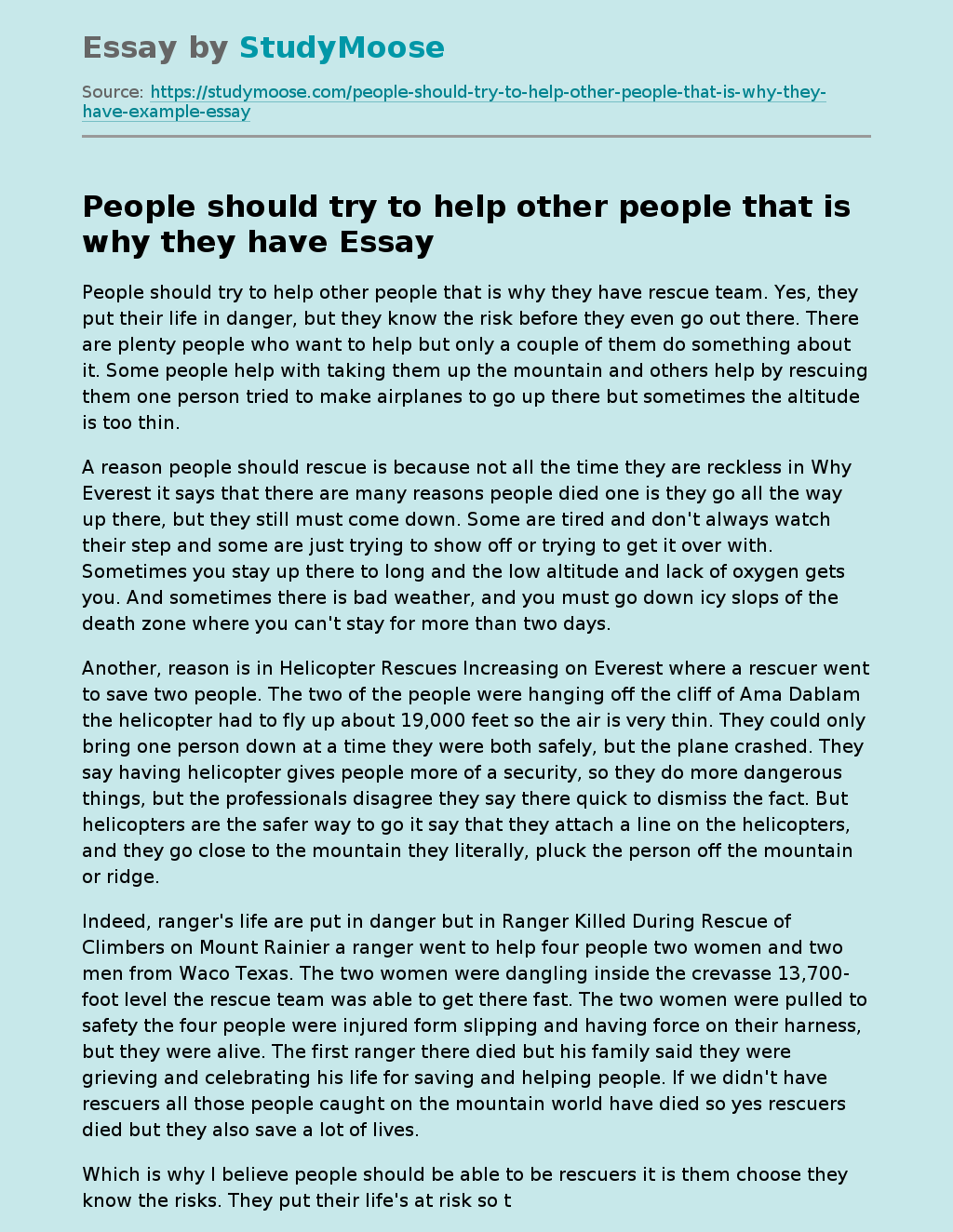