Don't use plagiarized sources.
Get Your Custom Essay on Parent-Child Relationship Just from $13,9/Page

Chapter Six of Art Spiegelman’s Maus offers a glimpse of how children tend to draw hatred towards their fathers for attempting to erase the memories of their mothers. Lastly, Jing-mei Woo’s “Two Kinds” in The Joy Luck Club features the story of her childhood under the pressure of her mother to chase the American Dream. All of these stories emphasize the relationship between parents and their children and its effects on the personal development of children and the struggles that parents have to face in raising their children.

In “Bridging,” Max Apple tells the story of a widowed father who struggles to persuade her daughter, Jessica, to trust the world after the death of her mother. In an attempt to bring her daughter back to her original emotional state, her father tries to convince her to join the Girl Scouts. However, this first step eventually fails and her father decides to join the Girl Scouts as an assistant leader, hoping that his decision is a good starting point to bring back her daughter’s trust in the world.

The story is essentially about how a widowed father is given the chance to accept the necessarily “changed” relationship with his daughter. Apple’s “Bridging” explores the parent-child relationship theme primarily from the angle of having to survive a family tragedy for the rest of their lives. Apparently, the father faces the task of serving both as the father and the mother of his daughter. It is perhaps a huge task since he has to at least persuade his daughter that he can also play a motherly image in the hopes of patching up the holes in their family left after the death of his wife.

Without a mother, his daughter is deprived of the chance to grow-up under the guidance of two parents. That being the case, there is reason to believe that the father is forced by the circumstances to live-up to the expectations of his 9-year-old daughter, which is exactly why he tried to join the Girl Scouts as an assistant leader. The difficulties of the father in the story, or of any father for that matter, are perhaps more intricate if the daughter is closer to her mother than her father.

The father will certainly encounter the trouble of trying to fit the motherly needs of the daughter no matter the costs are. In Chapter 6 of Art Spiegelman’s Maus, husband and wife, Vladek and Anja, respectively, are trying to sneak their way back to Sosnowiec. Art’s father recalls his experience together with Anja while trying to escape from the Nazis. One interesting part of the story is when Vladek burned the diaries of Anja after her death. They contained some of the most important memories of Art’s mother and yet, as things turned out, they were no longer available for him to read and learn more about her.

Even though Art was growing getting closer to Vladek during Art’s visits to his father, that recollection—the burning of Anja’s diaries—made Art infuriated at his father. It signifies how a father’s child is suffering a great loss at not being able to learn more about his mother, which is made al the more poignant by what Vladek could only remember from the diary: a sentence that says her son would one day be interested in the contents of the diary and read them. Reading the diary of a person is like reliving the life of that person in many ways.

Art could have learned more about Anja after reading her diaries and, in turn, learning more about his history and his self. However, the act of burning the diaries is like an act of “murder” precisely because Vladek destroyed the remaining memories of Anja, turning her into a barely known human being sought by the one person in this world who feels that she is more than everything in life. The predicament between Vladek and Art relays how the act of depriving a child of the memories of her mother can cast a sharp divide in the relationship of a father and his child to the point of calling the father a “murderer”.

In Jing-mei Woo’s “Two Kinds” in Amy Tan’s The Joy Luck Club, two essential themes come into view: the American dream and the tension between mother and daughter in reaching for that dream. The mother, Mrs. Woo, firmly believes that diligence can eventually lead her daughter to reaching the American dream. However, it is apparent that Jing-mei is not interested at all in pursuing that dream. Her disinterest in pursuing the dream that her mother wants her to attain is best summed up in her expression “[t]hen I wish I wasn’t your daughter.

I wish you weren’t my mother” (Woo, p. 142) after finally breaking her emotions for saying what she wanted to say all along, which is that she does not want to be the daughter her mother is hoping her to become. Jing-mei Woo’s differences with her mother rest on the conflict of their personal interests. The fact that her mother wants Jing-mei to realize her potential in claiming the American dream is the main reason of their misunderstandings as mother and daughter. Their case puts emphasis on the relationship strains caused by no less than differences in personal desires.

At first, Jing-mei was still able to tolerate her mother’s deep desires for her and she complied with her mother’s requests despite showing lack of enthusiasm. Their Chinese culture apparently shows in the initial sections of the story, highlighting the two kinds of daughters that Chinese mothers may have: “those who are obedient and those who follow their own mind” (Woo, p. 142). Towards the end of the story, Jing-mei tries to retrace her memories with her deceased mother by playing the piano.

Her act shows that no matter how deep the disagreements may be between parents and their children, there will come a time when the child will eventually learn to appreciate the value of what their parents have always wanted for them to achieve. All of the stories share the common theme of parent-child relationships. These stories teach us that the relationship between parents and their children can influence the perception of these children as they grow into adults. 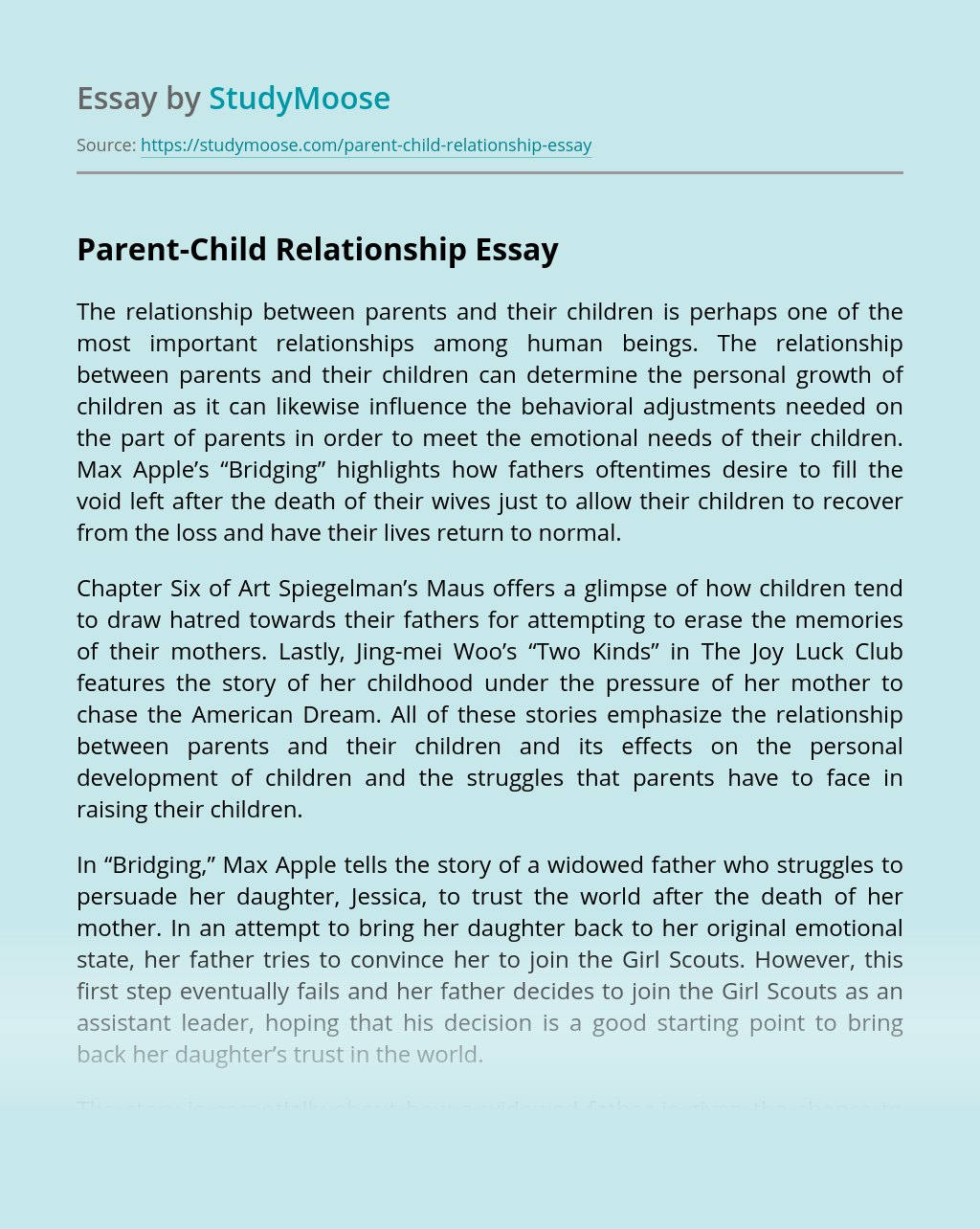 Communication is both dynamic and complex. In time it can be learnt, understood and eventually mastered. Why then do we expect children to be able to communicate with us correctly all of the time? Working with children requires us to build positive relationships with them quickly, but also in ways that are professional. The quality...

Kid abuse is a prevailing problem in society that must be addressed at the soonest possible time. Nevertheless, it is among the most hard issues to attend to as well since there are just particular ways by which it can be kept track of. What makes it even harder is the reality that the moms...

“Mcmaster Children’s Hospital is a caring for our future, one child at a time. ” It was distinguished as one of the hospitals who provided the best care for patients and is also awarded with Profiling Excellence in Family-Centered Care in 2008. Aside from receiving various awards and recognition for the quality of their services...