Travis Roy, a former collegiate hockey player, wrote his tragic story in a book called Eleven Seconds. Well, he didn’t physically write it down himself; he dictated the story to E.M. Swift, who organized Travis’ words into the book. This is because Travis Roy is a quadriplegic. After a mere eleven seconds of Travis’ first college hockey game, his dreams of the NHL were shattered forever.

Travis Roy’s autobiography, Eleven Seconds, has three parts. In the first part, Travis tells about his childhood and his high school career.

Don't use plagiarized sources. Get your custom essay on
“ Overcoming in Eleven Seconds by Travis Roy ”
Get custom paper
NEW! smart matching with writer

He reminisces about the fun he had playing little league hockey and how he would help out at the rinks that his father managed. The next part in the story is the climax. Travis describes his feelings and emotions leading up to game-time of his first college hockey game. He is extremely excited to be playing the sport he loves at such a high level of competition, but within eleven seconds, everything is stripped away from Travis.

He tries to check an opponent into the boards, but misses and hits the glass awkwardly. At this point it is all over. Travis Roy is paralyzed from the neck down: a quadriplegic. For the remainder of the story, Travis describes the motionless life that has been forced upon him. He tells about the pain of never being able to play hockey, or even live a normal life again. Travis explains the emotional battle his whole family was forced into and also states his case for stem cell research.

Eleven Seconds is a very well written book in my opinion. It is easy to read and has a friendly tone. I’m happy to have read the book because it made me realized that I should appreciate the little things in life that I take for granted every day. What if I woke up one day and couldn’t move my arms or my legs? That is the way Travis Roy will wake up every day for the rest of his life. I wonder if I would be able to cope with a situation like Travis’. I don’t think I would be mentally and emotionally strong enough. The book, Eleven Seconds, made me look at life from a different perspective. I didn’t feel like I was reading about just some random guy who had an unfortunate incident, but a person that is similar to me in many ways. Travis had hopes and dreams just like I do. Therefore, I was able to relate to Travis’ burning desire to follow through with his passion and it really saddened me to read about the way he became a quadriplegic, doing the very thing that he loved.

I would recommend Eleven Seconds to anyone who thinks their problems are too big to handle. The book is a good reminder that we should be thankful for everything we are able to do in our lives. Any time we have a meal, take a shower, brush our teeth, or get dressed, we are doing more than Travis can do on his own. I think the story is also a great motivator to live every day to the fullest. People who like hockey would probably be interested in Travis’ story as well. Travis Roy comes off as a warm and loving person, despite his terrible injury, so his book Eleven Seconds should be easy for most anyone to read. The only hard part might be keeping one’s tears off of the pages. 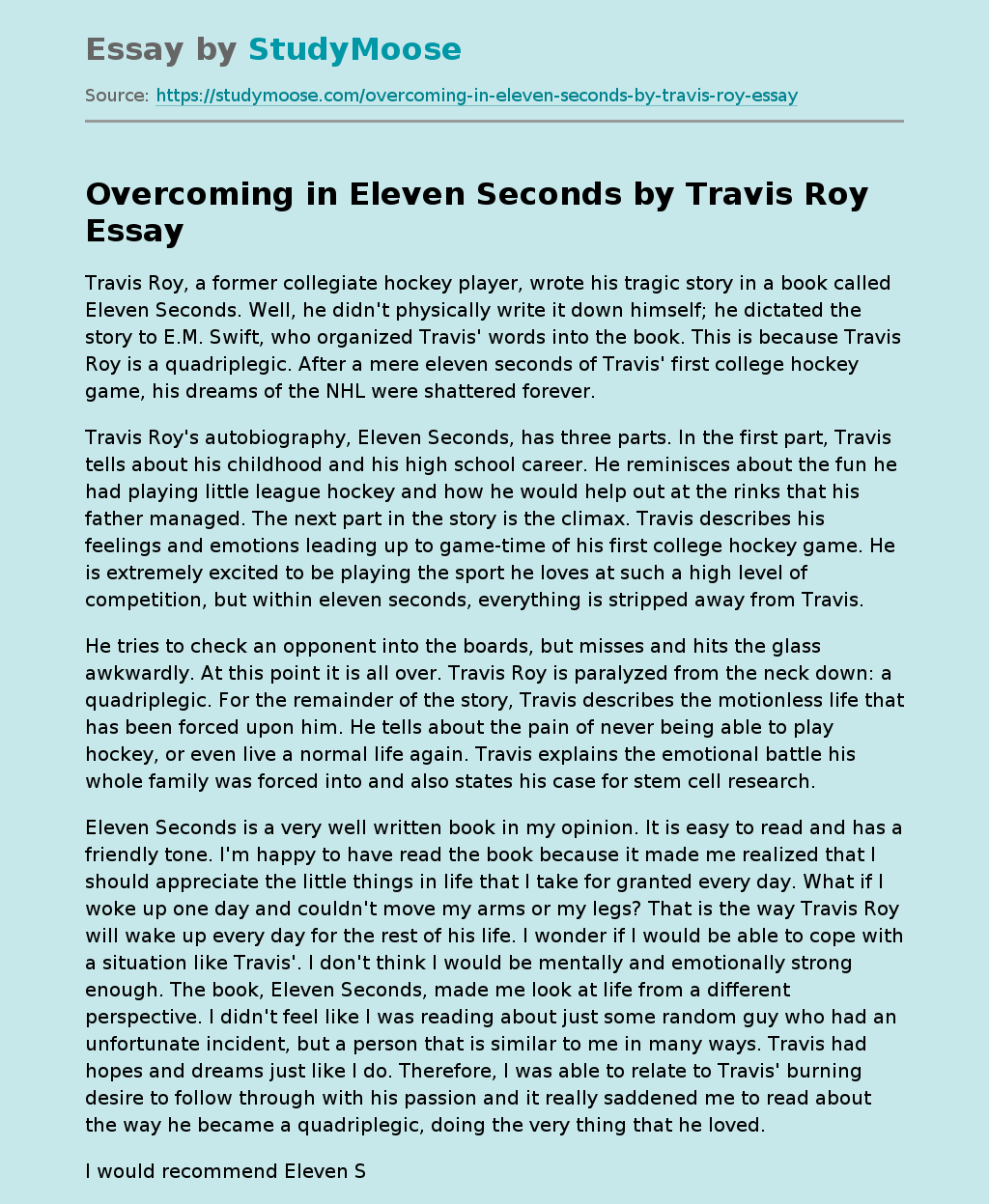