In the book Outliers author Malcolm Greenwell talks about a variety of topics that deal with how success is obtained by individuals who are blessed to have many different opportunities. They range from a school designed for students to excel, to being financially wealthy, or even being in the right place at the right time. Many different types of examples of people who found success through opportunities laid out in front of them are discussed in Outliers.

From a man who was Jewish and just happened to be born in a location where lawyers were scarce, to hockey players who were born just after the cut off dates, Gladwell describes types of advantages and how these opportunities sparked success for these people.

Don't use plagiarized sources. Get your custom essay on
“ Outliers by Malcolm Greenwell ”
Get custom paper
NEW! smart matching with writer

He also talks about how success is also derived from hard work and putting in the time to master a particular trade or skill. A theory of putting in ten thousand hours is discussed as the way to become an expert.

This way of thinking is actually a very intelligent one due to the fact that to achieve greatness at the highest level it only makes sense that one would have to work the hardest. As Gladwell states, “The people at the top don’t work just harder or even much harder than everyone else. They work much, much harder” (Gladwell 39). This is a great statement that shows how while luck and good fortune is never a bad thing, hard work and taking advantage of opportunities is what separates the ordinary from the extraordinary.

While outworking the competition is a very important aspect, having and taking advantage of opportunities is just as important to achieving success. Today, people all around the world pay attention to many famous stars or athletes and are always inspired by stories of struggle or hardship that they may have dealt with. Josh Hamilton, a famous baseball player, is one of these examples. His story is one that has been heard by many that deals with a guy who had everything he needed in life and threw it all away when he fell into the proverbial grasp of alcohol and drugs.

Then when all hope seemed lost he was able to escape the adversity in his life and turn it around and become the clean, Christian man that he is today. Josh Hamilton’s struggles and self-imposed obstacles played a major part in the early years of his major league career. He fought through and became a very successful player through the opportunities that he had and was given on his way back to the top. Josh Hamilton was a multi-talented person from the time he was very young. He could hit and throw harder than anyone his age and had all the skills that a coach would look for in a young child.

At the age of eight he could out play most of the kids in the thirteen year old league. He was what most would call a protege. Many of the parents were scared with Josh’s ability and raised concern about Josh hurting their children who were not nearly as talented. He amazed anybody who watched him and he even talked about people being stunned after watching him take a round of batting practice. He states, “I enjoyed watching other players’ reactions when I took batting practice. Everyone was stunned of how hard the ball came off of my bat” (Hamilton, 181).

He had a true talent that was unlike any that most had ever seen from a kid that age which was a God-given gift without a doubt. Throughout his teenage years he worked his butt off to be the best he could be by hitting and throwing just about every day, as well as lifting and staying in shape. Hamilton had everything to be a superstar, he just needed to keep his head straight and he was destined to become a millionaire straight out of high school if all went well. Hamilton grew up in an excellent household with two parents who loved him deeply and ones that supported everything he wanted to do.

They did well financially and he received several opportunities to excel due to this financial stability. From all-star teams to personal coaches, Josh had it all laid out in front of him. He had a desire to be the best unmatched by most kids his age. He had a unique understanding of what it takes to be “big-time” that few adults every completely grasp. He talked to many pro scouts during his early years of high school and he was preparing to be drafted and continue his fast track to fame.

Everything that Gladwell describes as keys to success Hamilton was provided. The only thing to keep him from this would end up being himself. Josh was drafted in the 1999 draft as the number one overall pick by the Tampa Bay Devil Rays and signed a $3. 96 million dollar bonus straight out of high school (Hamilton, 187). He was playing ball and doing extremely well. He had his family support and was growing into quite the individual. Eventually, however, when a few incidents were placed upon him, he folded and turned to a terrible place to find happiness.

He did things he never thought of doing before from drinking to smoking weed and eventually becoming a major crack addict. He got in with the wrong crowd and could not get out of the hold it had on him and was on his way to ruining everything. He spent all his money on drugs and alcohol and was very close to killing himself from the drugs he was taking. He had a family at the time and he distanced himself from them to a point where his wife wanted nothing to do with him. Life was falling apart for the once nationally renowned phenomena.

It wasn’t until he was pushed to the brink that he began trying to get to rehab and fix his addictions. He talks about his problems regarding the extent of his issues in his book, Beyond Belief. He says, “My journey to the depths of human depravity- to a place where a single-minded desire to alter my consciousness was my only goal- defies logic” (Hamilton, 187). This helps bring his story full-circle to show how he went from such a high point to a low, and then back up again. It is a true story of opportunity and fight which Gladwell talks about in his book.

Hamilton’s struggles fit in well with Gladwell’s success theories because Gladwell talks about how opportunity leads to success and Hamilton had every opportunity to excel. He was provided everything he needed and he obtained everything until he messed it up with bad decisions. He had many people help him as he worked back and thanks to these people he was able to make it, from the rehab people, to his teammates, to the baseball organization, and especially from his parents. This follows suit with Gladwell’s point of how opportunities can lead to success when all hope seems lost.

When Hamilton came back he was better than ever. Surprisingly he was away from the game for over two years, but when he returned he had not lost anything. His swing was still solid and his arm was still what it always was. He was a much better person and he was blessed for his chance to come back. He found the Lord and ended all his struggles by putting his focus in much more important things such as family, faith, and ball. He now has exceled to become the league Most Valuable Player in 2010 and has lead the Texas Rangers to two consecutive World Series appearances.

The writer of the Josh Hamilton biography talks about his physical attributes, especially his hitting ability when he says, “Josh has one of baseball’s most magnificent swings. It is smooth and powerful. His knowledge of the strike zone helps make him a great hitter, and he can clear any fence in the majors. In other words, he is a pitchers worst nightmare” (JockBio). Society can learn many things from Josh Hamilton’s story. It can learn that even with hard work and all the things that Hamilton had going for him, messing up and ruining it can happen.

But through anything if a person has opportunities to come back, they can succeed. Malcolm Gladwell has many examples of how success can be obtained through opportunity and hard work and Josh Hamilton is an excellent example of this. He struggled and was in a terrible situation but with an excellent supporting staff behind him, he was able to come back better than ever and do things that everyone thought he could do in the first place. Josh Hamilton is a true testament to success and a great figure to look up to. 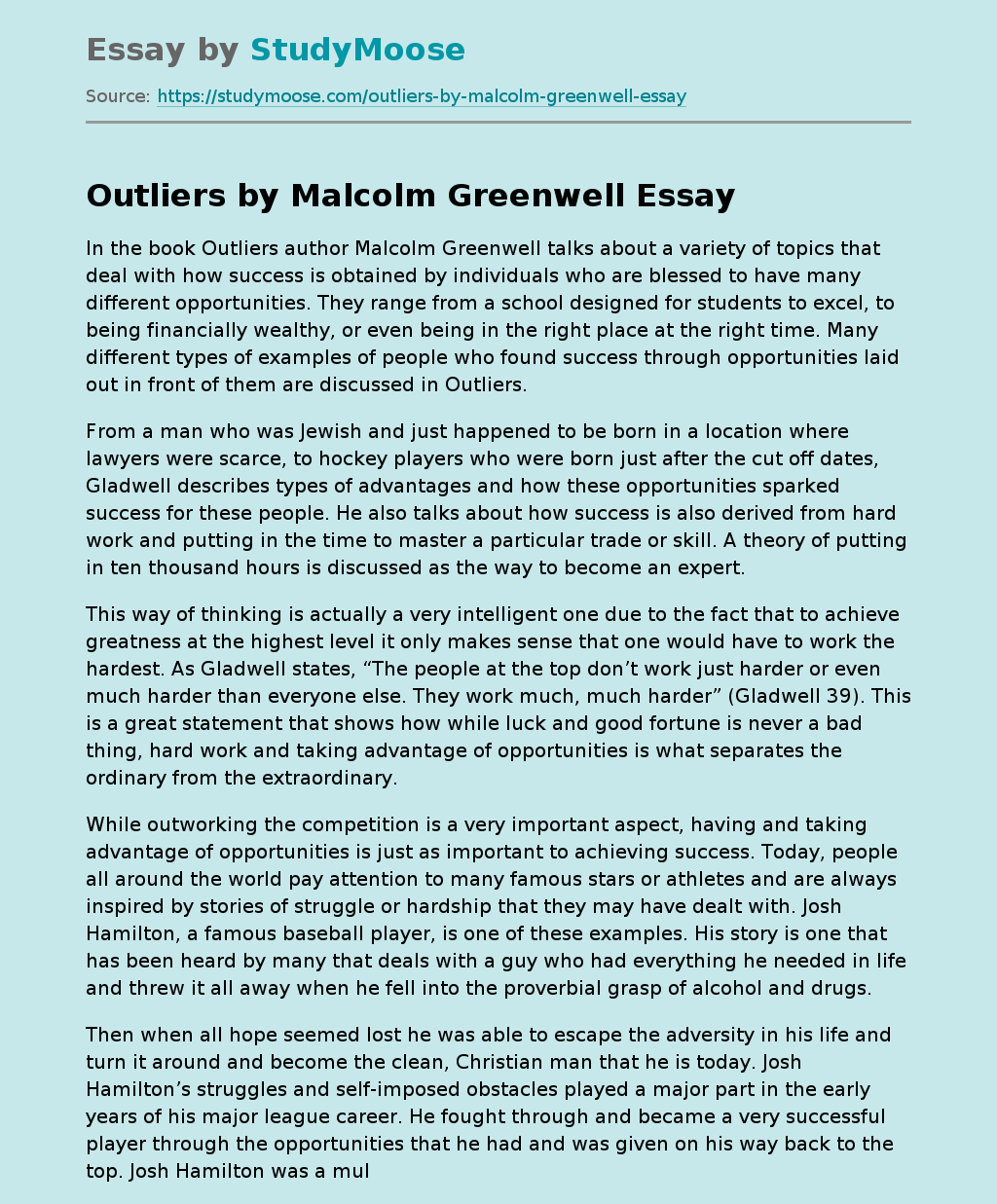