To become successful, do you have to work the hardest? Whenever we encounter successful people, we usually ask what they are like, what their routines look like, or what they think about. However, these questions and the answers oftentimes do not tell the whole story because other people have the same qualities of a successful person but they do not turn out to be exceptionally successful. So, how can we be successful? In his book Outliers, Malcolm Gladwell unveils the surprising reasons behind why some people are more successful than others, explaining it in a way that others would not normally imagine.

Don't use plagiarized sources. Get your custom essay on
“ Outliers by Malcolm Gladwell: Important Lessons About Personal Success ”
Get custom paper
NEW! smart matching with writer

Timing, social savvy, and hard work are the three necessary factors that affect an individual’s journey to success.

Being born in the right place at the right time is the first critical component that gives a person a head start on achieving success. It may seem obnoxious but there are pieces of evidence proving that date of birth matters.

Proficient in: Hard Work And Success

In Outliers for example, Gladwell explains the roster of the best Canadian hockey players and it shows that forty percent of the team was born in the months of January, February, and March. Furthermore, the same trend was observed at the 2007 Czech National Junior soccer team and the 2007 Czech Junior hockey team. Gladwell explains, “It has nothing to do with astrology, nor is there anything magical about the first three month of the year. It is simply that the eligibility cut-off for age-class is January 1” (Gladwell 24). Hence, players who made it to the cut-off period had more physical maturity and they were given a big head start, better coaching, and ample practice.

Furthermore, the players were identified as one of the best players of the league. Another example is the study conducted by Kelly Bedard and Elizabeth Dhuey, economists, about the fourth grade students. It shows that students who were born during the early months scored better than the students born in the later months. According to Dhuey, students who are older are placed in an advanced group to learn academic skills early on and they just get better and better through the years (Gladwell 29). In other words, students who are born in the earlier months of the same year are more likely to become successful as compared to the students who are born during the later months. So, timing really matters in one’s journey to success. In fact, people who are born at a perfect moment are given advanced training, coaching, and experience, which can develop into bigger and better opportunities in life.

Secondly, having the skills and characteristics of “social savvy” gives an advantage to an individual’s path towards success. Social savviness is measured not only through IQ, but also through concerted cultivation and practical intelligence. For instance, Gladwell discusses about the family background of two geniuses, Christoper Langan and Robert Oppenheimer. Langan grew up in a poor family, did not have a permanent residence, and was a college dropout. In contrast, Oppenheimer grew up in an elite family, lived in a wealthy neighborhood and attended one of the best colleges in the nation. Both of them have high IQ, but only Oppenheimer had the skills of social savviness. Gladwell explains, “IQ is a measure, to some degree, of innate ability. But social savvy is knowledge. It’s a set of skills that have to be learned… and the place where we seem to get these kinds of attitudes and skills is from our families” (Gladwell 102). Oppenheimer used his social savvy skills to escape from trouble after attempting to poison his tutor. Surprisingly, he was able to get away with it and only got on probation. Unfortunately, Langan did not possess these skills. He lost his scholarship and was dropped from school because his mother forgot to sign the paperwork to renew his scholarship. And then, he transferred to another school but he dropped out later due to transportation problems. In other words, Langan would have been as successful as Oppenheimer if he had social savvy.

Another example was the study of a group of third graders of the same IQ level conducted by Annette Laureau, a sociologist from UC Berkeley. The study shows that kids who are trained by their parents to speak out their opinions are the ones who succeed better compared to the other kids. According to Laureau, “This parenting style is called concerted cultivation – it’s an attempt to actively foster and assess a child’s talent, opinions, and skills” (Gladwell 104). Also, Laureau gives an example about this nine-year-old boy and his mother during a doctor’s visit. In addition, Laureau explains that the mother taught her kid that it is perfectly fine to be assertive whenever he speaks with older professionals (Gladwell 106). So, The kid was able to talk assertively to the doctor about his symptoms and he was able to get treated without the help from his mother because he learned to speak up for himself. Other kids would not normally do as well as what the nine-year-old kid does. These examples about Oppenheimer and the richer kids in Laureau’s study have something in common: both of them came from a wealthy family, and they fared well during their upbringing. In contrast, this is what Langan and the poorer kids did not have. Therefore, determining the success of a person does not only rely on one’s intelligence alone, but also on having the skills and characteristics of social savviness.

Hard work is the third and the most important factor that affects an individual’s journey to success. Amidst the studies of how perfect timing and social savvy skills can be, hard work plays the most important role. In Outliers, Gladwell discusses about the 10,000-hour rule, in which he argues that it takes 10,000 hours of practice to master a craft – be it in the field of computer, business, music, sports, arts, and etc. Take Bill Gates and the Beatles for example. Gates accumulated 10,000 hours of programming while attending one of the elite private schools in the nation while the Beatles started up playing at a club in Germany for at least eight hours daily. Consequently, they mastered their crafts and are now successful in their own chosen fields because of the hours they dedicate to their work. Gladwell also explains the life of the Asian rice farmers and their rice paddies. In western countries, farmers rely on machines and acres of lands to produce a higher yield of rice. However, in Asian countries, specifically in East China, their rice paddies are small, but the precision, effort, hard work, and the three thousand hours they put in to their work helps in producing a higher yield and better quality of rice. These examples show that hard work and hours put into work can lead to a successful outcome.

One person can become successful in any number of ways. However, success cannot be reached by just having one factor alone. Gates became successful not only because of hard work, but also because he had a good upbringing and he was born at a perfect time during the breakthrough of the computer programming. The hockey players did not become the best players just because they were born in the first three months of the year, but also because they put in thousand hours of practice to be some of the best hockey players in history. Oppenheimer did not have a high IQ and practical intelligence alone, but he also came from a wealthy family. Therefore, success is not just about hard work itself, but also a combination of social savvy and perfect timing which are necessary for an individual to succeed in life. 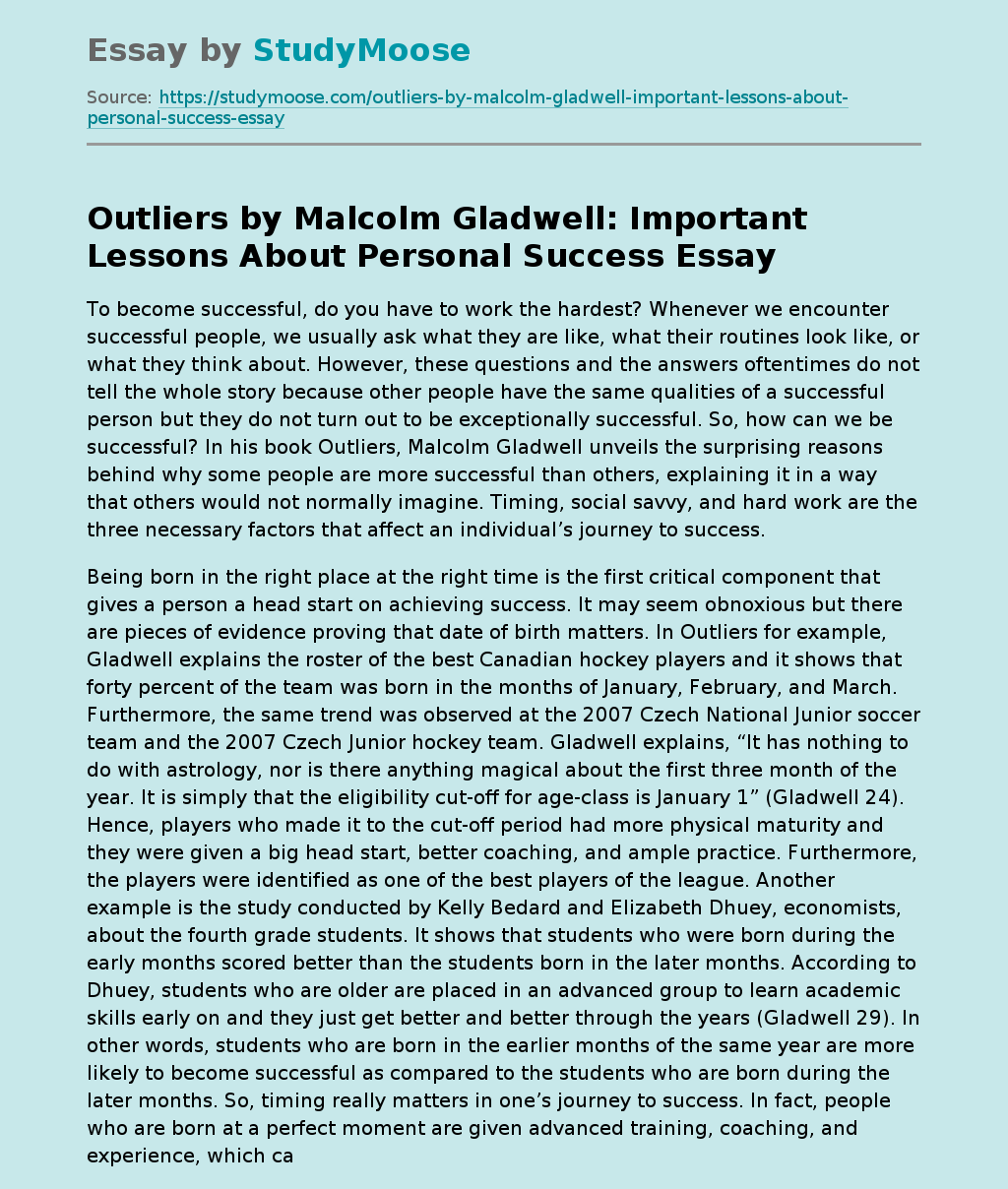