Act III offers happy resolution to the problems of identity and marriage that drive much of the humor in the previous acts. Wilde continues to mock the social customs and attitudes of the aristocratic class. He relentlessly attacks their values, views on marriage and respectability, sexual attitudes, and concern for stability in the social structure. Wilde attacks social behavior with the continuation of speeches by his characters that are the opposite of their actions. While Cecily and Gwendolen agree to keep a dignified silence, Gwendolen actually states that they will not be the first ones to speak to the men.

In the very next line she says, “Mr. Worthing, I have something very particular to ask you.” Wilde seems to be saying that people speak as if they have strong opinions, but their actions do not support their words. If actions truly do speak louder than words, Wilde has made his point: Society, literally, speaks volumes, but the words are meaningless.

Wilde continues his criticism of society’s valuing style over substance when Gwendolen says, “In matters of grave importance, style, not sincerity is the vital thing.” Lady Bracknell discusses Algernon’s marriage assets in the same light. She says, “Algernon is an extremely, I may almost say an ostentatiously, eligible young man. He has nothing, but he looks everything. What more can one desire?”

Indeed, in a society where looks are everything and substance is discounted, Algernon is the perfect husband. What else do aristocrats value? They seem to esteem the appearance of respectability.

Respectability means children are born within the context of marriage. Wilde once again mocks the hypocrisy of the aristocrats who appear to value monogamy but pretend not to notice affairs. Jack’s speech to Miss Prism, whom he believes to be his mother, is humorous in both its indignant defense of marriage and also its mocking of the loudly touted religious reformer’s virtues of repentance and forgiveness.

He says to Miss Prism, “Unmarried! I do not deny that is a serious blow…. Mother, I forgive you.” His words are all the more humorous when Miss Prism indignantly denies being his mother. It was not at all unusual for aristocrats to have children born out of wedlock, but society turned its head, pretended not to know about those children, and did not condemn their fathers. The gulf between the upper class and its servants is explored in the scenes with Merriman and Prism. When Lady Bracknell unexpectedly shows up at Jack’s, Merriman coughs discretely to warn the couples of her arrival. One can only imagine his humorous thoughts as he watches the wealthy tiptoe around each other and argue about what should be important.

When Lady Bracknell hears the description of Prism and recognizes her as their former nanny, she calls for Miss Prism by shouting “Prism!” without using a title in front of her name. Imperiously, Lady Bracknell divides the servant from the lady of the manor. Wilde’s audience would recognize this behavior on the part of the servants and the upper class. The stuffy class distinctions defined the society in which they lived. In an age of social registers, Lady Bracknell laments that even the Court Guides have errors. In the next breath, she discusses bribing Gwendolen’s maid to find out what is happening in her daughter’s life.

In Act III she also reveals that her aristocratic brother’s family entrusted their most precious possession — Jack — to a woman who is more interested in her handbag and manuscript than in what happens to the baby in her charge. Wilde seems to be questioning the values of a society that believes in social registers, hires other people to neglectfully watch its children, and uses bribery to keep track of the children who are not missing. The death of Bunbury gives Wilde the opportunity to speak of aristocratic fears and have some continued fun with the upper class’s lack of compassion about death.

The 1885 Trafalgar Square riots brought on ruling-class fears of insurrection, anarchism and socialism. Wilde humorously touches on these fears when he allows Algernon to explain the explosion of Bunbury. Lady Bracknell, fearing the worst, exclaims, “Was he the victim of a revolutionary outrage? I was not aware that Mr. Bunbury was interested in social legislation. If so, he is well punished for his morbidity.” Evidently, to Lady Bracknell’s acquaintances, laws that protect the welfare of those less fortunate are strictly morbid subjects. In fact, this attitude seems to contradict the upper-class concern for reform.

However, in reality, Wilde is confirming the upper-class definition of social reform: conforming to the status quo. In Act III Wilde makes a comment on the value of being homosexual with a veiled reference to Lady Lancing. When Lady Bracknell asserts that Cecily needs to have a more sophisticated hairstyle, she recommends “a thoroughly experienced French maid” who can make a great deal of change in a very short time. She explains that such a change happened to an acquaintance of hers, Lady Lancing, and that after three months “her own husband did not know her.”

Jack uses the opportunity to make a pun on the word know, using it in an aside — a comment only the audience can hear. Jack interprets know to mean they no longer had sex, insinuating Lady Lancing’s preference for the French maid. He says, “And after six months nobody knew her,” indicating that the homosexual experience made a new woman of her. Although homosexuality would have been seen as immoral to Wilde’s audience, Jack indicates that being homosexual might be a good thing — almost as a social commentary — directly to the audience. It seems a double life is necessary after one is married, whether it be bunburying or the homosexual life Wilde was experiencing in an increasingly public way.

Wilde continues his assault on family life in Act III by mentioning its strange qualities in several conversations. It appears rather strange, for example, that Lady Bracknell cannot even recall the Christian name of her brother-in-law, Algy’s father. Algernon’s father died before Algernon was one, so stranger yet is Algernon’s comment, “We were never even on speaking terms.” He gives that as the reason he cannot remember his father’s name. Further assaulting family life, Wilde has Lady Bracknell describe Lord Moncrieff as “eccentric” but excuses his behavior because it “was the result of the Indian climate, and marriage, and indigestions, and other things of that kind.” Marriage is lumped together with things such as indigestion.

In explaining Lord Moncrieff’s marriage, Lady Bracknell says that he was “essentially a man of peace, except in his domestic life.” Her description invites suspicion that the local constabulary might have visited because of domestic disturbances. Family life and domestic bliss do not get high marks in Wilde’s estimation. When Miss Prism humorously resolves the problem of Jack’s lineage, Wilde takes his hero of unknown origins and paints him as the aristocrat who will now be assimilated into his rightful place in the social structure.

Through the sad melodrama of Jack’s handbag parentage, Wilde exaggerates the Victorian cliché of the poor foundling who makes good. As soon as Jack is known to be a member of the established aristocracy, a Moncrieff in fact, he is seen as an appropriate person for Gwendolen to marry. They will, according to Wilde, live happily ever after in wedded bliss and continue the aristocratic blindness to anything that truly matters. The tag line of the play, spoken by Jack, is a familiar convention in Victorian farces. In discovering that he has been telling the truth all along — his name is Ernest, and he has a brother — Jack makes fun of the Victorian virtues of sincerity and honesty and asks Gwendolen to forgive him for “speaking nothing but the truth.”

He now realizes the importance of being the person he is supposed to be. Wilde is saying perhaps that a new kind of earnestness exists, one that is different from the virtues extolled by the Victorians. Maybe it is possible to be honest and understand what should be taken seriously in life rather than being deceptive, hypocritical, and superficial. Some readers believe, however, that the ending shows Jack mockingly redefining Victorian earnestness as just the opposite: a life of lies, pleasure and beauty. Critics debate the interpretation of the last line. A curious stage direction occurs in Act III, revealing the concern Wilde had for the staging of his play to compliment his ideas.

As his couples come together and move apart, he emphasizes the choreography of the pairs. He has them speak in unison, both the women together and the men together. It matters not who they are; they are interchangeable. Marriage is simply an institution that is a gesture, like a christening. The unison speaking is very stylistic, not meant to be realistic at all. It reveals Wilde’s attitude that what is important in Victorian marriage — names — really should not be as important as other considerations.

In the end, Wilde leaves his audience thinking about the trivial social conventions they deem important. Their Victorian virtues perhaps need redefining. Institutions such as marriage, religion, family values and money should perhaps have new interpretations. The character of people, rather than their names and family fortunes, should weigh most heavily when considering their worth. Wilde was able to use humor to skewer these attitudes and convince his audience about the importance of being earnest. 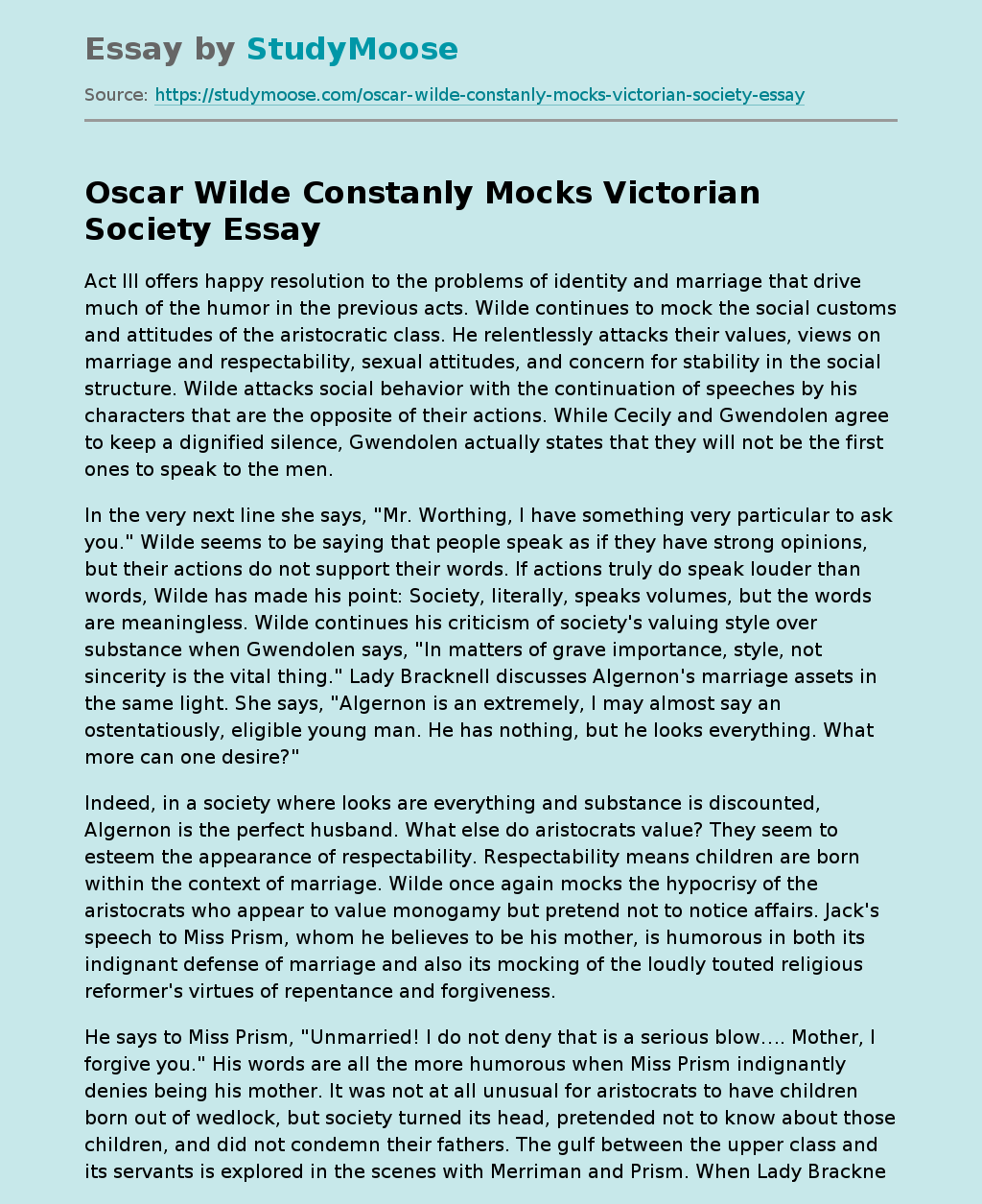