In my essay I’m comparing the myth of Orpheus and Eurydice from the Myths and Their Meanings book by Max J. Herzberg and the website http://www. shmoop. com/orpheus-eurydice/summary. html. The two stories have the same basic premise. Orpheus, a legendary musician with a powerful lyre, is married to Eurydice who was an oak nymph and daughter to Apollo. This is a famous myth about love and how your decisions are often consequential. The wedding day between the two was supposed to be a very special day among the Gods, but it turned for the worse soon after.

Turn in your highest-quality paper
Get a qualified writer to help you with
“ Orpheus and Eurydice Comparison ”
Get high-quality paper
NEW! AI matching with writer

This tore Orpheus apart and he was left in agony. He made the decision to go down to the underworld and beg for Eurydice’s life back.

Hades, feeling compassionate allowed Eurydice to go back to the over world with Orpheus, but there was an added stipulation. If at any time the two were leaving the Underworld Orpheus was to look back, then Eurydice would immediately be taken back to the land of the dead.

They were almost out of the Underworld but Orpheus looked back before he realized what he was doing. As soon as it happened Eurydice disappeared and was brought back down to the Underworld. Orpheus was left to roam the world for the rest of his life just hoping and waiting for death to be brought upon him. It took a very long time but at last Orpheus died, and he was finally returned to his one true love Eurydice. Although the basic story is the same in the two compared versions there are many differences. In the website version there was many differences from the Myths and Their Meanings version.

On the website, on Orpheus and Eurydice’s wedding night Hymen the God of Marriage was the minister, but he refused to say any kind words or even smile to them, this was a sign of misfortune to come later in the relationship. After the ceremony, Eurydice went outside to get some fresh air, when Aristaeus, a shepherd who had always wanted Eurydice surprised her and chased her to a nearby riverbank. While she was running to get away from him she encountered a viper that bit her on the leg, killing her. Orpheus was devastated by what had happened and went down to the Underworld to get Eurydice back.

He played his lyre, which made all of the spirits and the monsters back off so he could pass through. He approached Hades played his lyre and made a big speech begging for Eurydice back. Hades agreed but set a stipulation. Eurydice was to follow behind Orpheus and Orpheus was to under no circumstances look back at her. They were nearly out of the Underworld when Orpheus, overjoyed that he was going to get his wife back, turned back without thinking. Eurydice was immediately pulled back into the Underworld forever. Orpheus tried to enter the Underworld once more, but the ferryman at the River Styx would not let him through.

Orpheus sat and cried at the River Styx for the next 7 months. When Orpheus returned back up to the Over world, many women tried to be with him, especially the Maenads, a group of women who worshipped the god Bacchus. The Maenads were upset that he rejected them, so they tore him limb to limb and threw his head into a river. His head, still calling out for Eurydice, arrived at the island of Lesbos, where Muses found it and gave it a proper burial. Orpheus was finally dead and could see Eurydice once again. The two versions of the myth are similar in the overall story, but a lot of the fine details are different.

In the Myths and their Meaning versions Orpheus and Eurydice were happily married for a couple years, but one day when she was wandering through a field she was stung by a serpent and before they could call for help, she died in the arms of her husband. Orpheus was heartbroken and would see constant reminders of what had happened, so he eventually made the decision to search for the Underworld. He found a cave on the side of a volcano that led him through many dark passages and pits and it finally led into the realm of Hades.

He played his lyre and all of the ghosts followed behind him in silence. He approached Hades where he bowed, played the lyre and told Hades his story. His tale led to Hades shedding tears, causing Orpheus to cry himself. Hades allowed Orpheus to bring Eurydice back up to land, under the condition that Orpheus was to never look back. The end was in sight for them and they could see sunlight, he grew terrified that something had happened to Eurydice and she had fallen, so he turned back just to see her right behind him.

Right as this happened he heard a scream and Eurydice was pulled back into the Underworld. Orpheus tried to turn back but was met by a wall of stone. After this Orpheus’s life meant nothing to him, he wondered around the world in gloom and depression. He met a tribe called the Maenads and when they rejected him they starting throwing stones at him. His magical lyre prevented him from getting hit while it was playing, but the Maenads women screamed so loud that their voices drowned out the sound of his lyre, causing the stones to hit him, killing him.

The tale of Orpheus and Eurydice has been told many different times, and every version has small details a bit different from the last. These two different versions of the myth show how the overall story of Eurydice dying, and Orpheus trying to retrieve her stay the same, but just about every other detail is slightly different. This goes to show how the myths get spread around, country to country and generation to generation. They remember the overlying theme, but the fine details often get lost in translation. 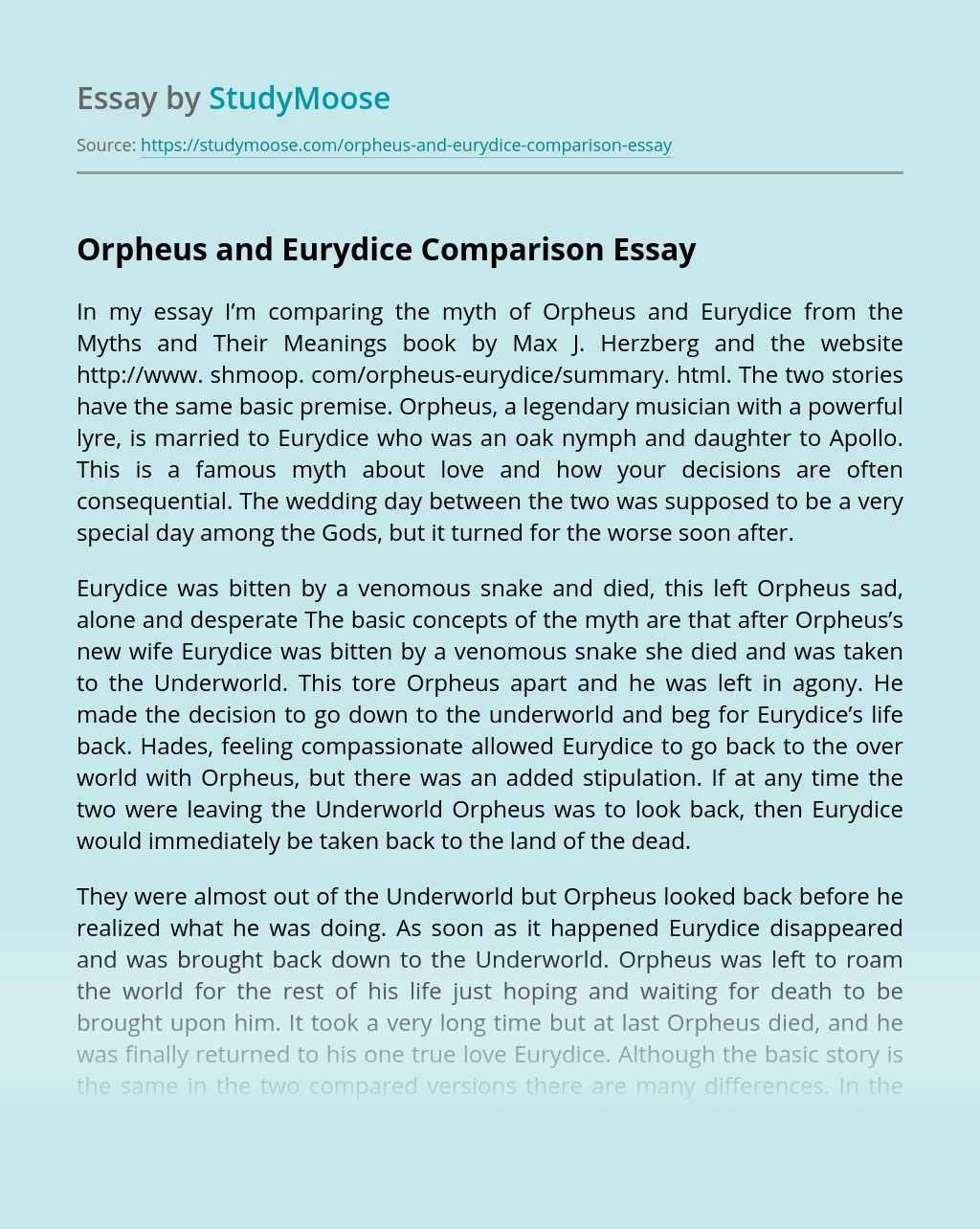 Turn in your highest-quality paper
Get a qualified writer to help you with
“ Orpheus and Eurydice Comparison ”
Get high-quality paper
Helping students since 2015
Stay Safe, Stay Original