Organ Donation and Its Ethical Values

For this study the focus is on the ethical perspectives of organ donation. In this overview organ donation is defined as a consenting individual whom wanted to donate their organs. This is determined when the circulatory system in the body is no longer functioning (Thoung et el 2016). One of the primary perspectives that is associated with organ donation is Categorical Imperative. It follows the idea that as a society we can determine what is right or wrong based upon our decision-making process (Kohl, 2015) Another intertwining perspective associated is Unitarianism.

Don't use plagiarized sources. Get your custom essay on
“ Organ Donation and Its Ethical Values ”
Get custom paper
NEW! smart matching with writer

This is defined as the happiness that can be associated organ donation to help society flourish (Sheskin, M., & Baumard, N. 2016)

It’s also shaped upon the idea that the person whom is taking part in the donation is volunteering to donate their organs. Yet in the present there have been many conflicting views that have been associated with the idea of Organ Donation. Some many find it to be unethical due to their religious background, or some may find it to be ethical based upon the circumstances of the situation. This brief overview of Organ Donation will help determine when the idea of organ donation is justifiable.

What is Organ Donation and What Factors Determine It?

Organ Donation has been defined in many ways that can be viewed as ethical to person whom originally agreed to donate while they were alive. Based upon the finding of Thuong et. al. (2016) there was an international conference held to set the new criteria for organ donors. The main criteria which was discussed was primarily based upon the when it was justifiable to determine removing the organs from an individual that was listed as donor. One of the most prominent criteria was the death of an individual after their circulatory system had stopped functioning (Thuong et al. 2016). The circulatory system in the human body is responsible for most of the active blood transport through the heart (Shea 2017). The heart plays a pivotal role in how out blood flows through our bodies. During the conference all the criteria discussed mentioned that an individual could only donate their organ if their circulatory systems had stopped functioning altogether (Thuong et al. 2016). Also, the donors whom wanted to take part in saving someone’s life had to be a consenting individual.

Categorical Imperative and Its Importance

There are many ethical considerations to consider when looking at the positives and negatives of donating one’s organs. One of the most critical regarding this biomedical approach of organ donation is its intertwining view of the Categorical Imperative. Categorical imperative is of prime importance. It follows the idea that as a society we can determine what is right or wrong based upon our decision-making process (Kohl, 2015). Often in many life-threatening events many individuals will need the help of an Organ Donor. Organ Donors in relation to categorical imperative can be most related to a natural cause (Kohl, 2015). For the purpose of this overview natural causes will be defined as consenting Donor. It will also be defined as the determining factors of Organ Donation in Many situations. These two definitions on Natural may ultimately define how categorical imperative is used. From a categorical imperative standpoint organ donation is justifiable. According to Kohl (2015) the categorical standpoint may determine by the obligations that society has in store for them. This in comparison to an organ donor states that if a person feels obligated for the right purpose, then they should donate their organs for a natural cause.

As stated earlier in the overview cardiac arrest is mostly associated with the circulatory system. According to Goudet et. al (2013) there have been recent methods of how organ donation itself should be implemented. This is in relation to the people whom are viewed as ideal donors, which are people whose cause of death has been ruled a cardiac arrest. (Goudet et. al 2013) In a study conducted by health care professionals, they created a questionnaire to help develop the ethical standards for organ donors. The questions asked were put into yes or no categories. The questions helped compose statistical data to focus on the percentage of individuals whom had moral obligations. The findings of Goudet et al. (2013) stated that 67% of the participants in the study expressed that did not care for how organ donation was carried out. Yet from this same study 20% of the participants could not formulate an opinion (Goudet et. al 2013) These two percentages demonstrate some form of biases as well as contrasting viewpoints on the donor’s selfless choice or donate. These findings also may demonstrate a key correlation between the idea of Utilitarianism. Utilitarianism is an ethical perspective that focuses primarily on society.

Utilitarianism and Its Value

This ethical perspective presents many outcomes of how it can be applied towards organ donation. Organ donation has many ethical concerns due to the fact based upon how society views it as well whom it’s most beneficial for. According to Sheskin, M., & Baumard, N. (2016), utilitarianism is defined as an action or event that includes the idea of happiness if there is happiness benefiting society. In other words, the ethical theory of Utilitarianism can be defined as a stepping stone for organ donation. This is primarilty due to a person making a life changing decision after they are deceased to save another person’s life. Often a donor makes that choice to donate their organ while they are alive for a greater good. Utilitarianism itself in relation to organ donation promotes the greatest good for the greatest number or people. Society as whole in terms may prosper even if there is the loss of the donor.

All in all, I feel that Utilitarianism as well as the idea od categorical Imperative are tied hand in hand in their ethical perspective. Yet there are many stepping stones that can be identifies as way to promote organ donation. For this study organ donation is defined as the removal an individual’s organs only after they have been deceased. This is determined when the circulatory system is no longer functioning at its peak. (Thuong et al 2016). This is to ensure that the donor is safe from harm and that there is no way of harming the actual donor. Yet I feel as there is an importance of both ethical perspectives. Regarding organ donation most people are not knowledgeable of what the donor wants unless they are a related to the donor themselves. This is due to their moral standpoints of whether if it is ok to donate one’s organs.

Based upon the findings of Goudet et al. (2016) we can infer that cardiac arrest is mainly associated with categorical imperative due to the questionnaire that was answered by healthcare professionals. This is primarily since categorical imperative is strongly associated how or what we decide on things. Our decision-making process as a society can affect many things that we ultimately decide to do including donating our organs. This is primarily on the grounds of how society value a donor’s choice.

Another key ethical perspective to consider is utilitarianism. Utilitarianism also plays a key role in shaping organ donation. This ethical perspective is promoting the greatest good for the greatest number of people. Organ donation itself is also centered on the idea that we can help a vast amount of people once we pass on. When we pass on, we can help society flourish by allowing the medical community to use our organs to save a life. To conclude the findings in this brief overview, organ donation strictly follows categorical imperative and utilitarianism. The reason behind this is that the donor ultimately is deciding on a choice that will help save another person’s life in the future.

Organ Donation and Its Ethical Values. (2021, Feb 26). Retrieved from http://studymoose.com/organ-donation-and-its-ethical-values-essay 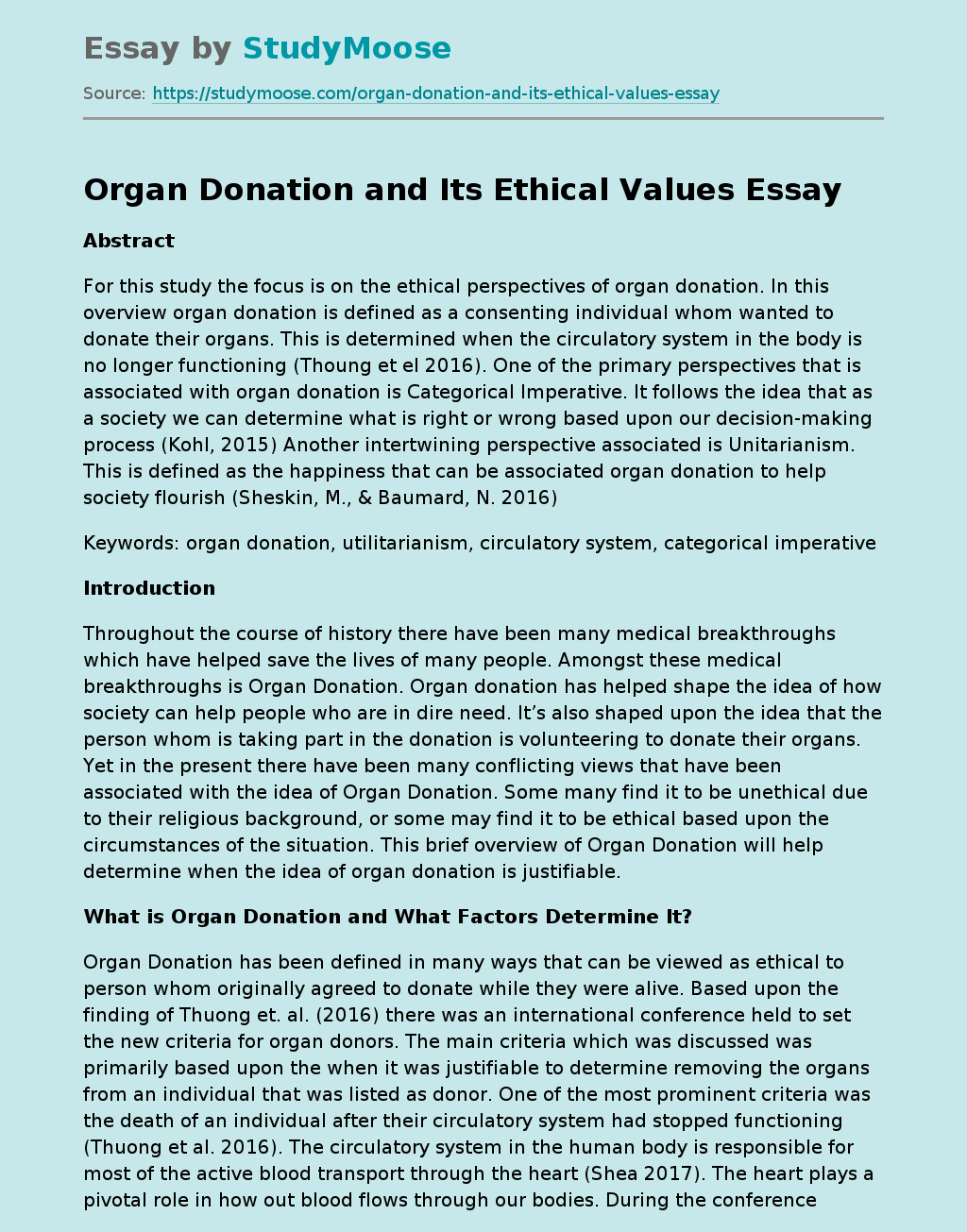