A Chinese proverb says, “Just as bitter medicine cures sickness, so unpalatable advice benefits conduct.” In China, Wei Zheng, one of China’s most forthright royal advisors was likened to a mirror reflecting the mistakes of the court. During his career, he advised the Emperor on more than 200 affairs of state, and wrote hundreds of thousands of characters of memoranda to the throne. He ceaselessly expressed his views and wouldn’t back down whenever he thought himself in the right. (Reeves)

Wei Zheng expressing his opinions to the emperor helped the Tang Dynasty prosper.

Don't use plagiarized sources. Get your custom essay on
“ One Way to Assure the Health of a Discipline Is to Nurture Contrasting Perspectives ”
Get custom paper
NEW! smart matching with writer

To effectively evaluate the above claim, we must first clearly define some terms.

The term “health” could mean quality or accuracy. In this context, the word “nurture” means to receive, consider, accept, embrace, or encourage. “Contrasting perspectives” refers to disagreements, perspectives that disagree with the majority, or new paradigms that emerge. Scientists typically depend on peer review and revision to assure the quality of their findings. Disagreement offers chances for revision and provides a platform for superseding old, unclear, or inaccurate theories and enhancing the quality and value of knowledge.

Therefore nurturing contrasting perspectives is indeed an effective way of assuring the health of a discipline.

Here, I will look at how embracing contrasting perspectives improved the quality of knowledge and the “health” of disciplines such as chemistry, biology, and mathematics. According to history, it appears that nurturing contrasting perspectives has increased the quality of knowledge in chemistry. Old knowledge in Chemistry has been continuously superseded because of chemists’ disagreements that often arise due to better technology or further developments in science that provide new insights into old theories. So disagreement and arguments between experts allow mistakes to be revised and progress to be made.

The acid and base theory is an example of quality knowledge that was made possible because of disagreement. In 1890, Svante Arrhenius provided his initial, albeit immature theory and established the indisputable fact that H+ ions and the OH- ions exist in an aqueous solution. Acids provide hydrogen ions and bases provide hydroxide ions, and they react together to form water in neutralization reactions. However, In 1923, Brønsted and Lowry proposed their theory that acids donate protons (H+), bases provide protons.

The Brønsted-Lowry theory superseded Arrhenius’s theory. Because Brønsted and Lowry were both established scientists and protons and electrons had been studied, their ideas were more readily accepted than Arrhenius’s due to it being easier to accept the fact that atoms could break apart. (Hung) Consequently, the nurturing of Brønsted and Lowry’s contrasting perspective enhanced the accuracy of acid-base theory and assured the health of the chemistry discipline. Biology, another Natural Sciences discipline also provides abundant examples illustrating the importance of disagreement and contrasting perspectives.

For example, in Ancient Greece, people once believed that life generated spontaneously from nonliving matter. Also, the classical theory utilized spontaneous generation theory to explain the origin of life. According to that theory, pieces of cheese and bread wrapped in rags and left in a dark corner would have mice in the rags after several weeks. By the 18th century it had become obvious that higher organisms could not be produced from nonliving material. But the origin of microorganisms such as bacteria, however, was not fully understood until the 19th century when Louis Pasteur proved that microorganisms reproduce. (Creation Science 4 kids)

To refute spontaneous generation theory, Pasteur devised a contrast experiment to test whether sterile nutrient broth could spontaneously generate microbial life, whether life is spontaneously generated. Pasteur added nutrient broth to “swan neck” flasks, and then boiled the broth to sterilize the broth and kill any existing microbes. Pasteur then broke the “swan necks” off half the flasks and exposed their broth to air. Over time, dust particles from the air fell into the broken flasks. In the unbroken flasks, dust particles remained near the tip of the swan necks and kept the broth sterile and clear. However the broth in the broken flasks became cloudy, which indicated the presence of microbial life. (Pasteur Brewing)

Thus Pasteur’s experiment refuted the notion of spontaneous generation, a widely held belief at the time. By nurturing his contrasting perspective, Pasteur led to the production of quality knowledge and greater health of the biology discipline. In mathematics disciplines, arguments and disagreements by mathematicians have also improved the quality of knowledge to some extent. In 1494, the famous mathematician Luca Pacioli published his first book during the Renaissance period in Venice. In his book, he stated that it was impossible to solve cubic equations.

Contrary to Pacioli’s belief, Scipione del Ferro, one of Pacioli’s contemporaries was the first to discover a solution to one kind of cubic equation. He shared his knowledge, and inspired other mathematicians to discover additional completely new methods for solving cubic equations in different cases. These new approaches were a sort of contrasting perspective or disagreement because originally mathematicians like Pacioli had no idea about how to solve cubic equations. Del Ferro’s and his closest followers’ solutions led to further insights into cubic functions. Therefore, disagreement can lead to the correction of incorrect claims and the health of disciplines like mathematics. When some scientists express disagreements with evidence or revise some mistakes in science, it increases the quality of knowledge or the health of the discipline, but at the cost of efficiency. Old theories are superseded as scientists develop newer, correct theories.

Old theories are queried, so disagreement results the revision of mistakes and in progress to improve theories. However, contrasting perspectives may hamper the rate of development when everyone has different opinions or different ideas about something. Disagreement is not always a good thing in that it can decrease the efficiency of research due to arguments that cost time and money, and require greater human resources to check research and to revise mistakes. Consequently, development may break off. Though nurturing contrasting perspectives may ensure the health of a discipline in the long-term, it does not always accelerate the production of knowledge.

It may cause the development of knowledge and its quality to stagnate to some extent. Contrasting perspectives may hamper the development of knowledge in disciplines like Biology. For example, people now know that the structure of the DNA molecule is a double helix. Rosalind Franklin first discovered this fact in 1951 when people just had a vague understanding of the shape of DNA. Franklin conducted research, produced x-ray images, and held a lecture to report this significant discovery, but her findings were not accepted, perhaps because she was a female scientist. Her peers doubted the authenticity of her pictures and ridiculed her.

Technology such as lenses, magnifying glasses, and microscopes all were instrumental in the development of cell theory. Robert Hooke is credited with first observing cells in 1665; he used a microscope to look at cork cells. Then, in 1670, Antoni van Leeuwenhoek was the first scientist to discover pond life by using lenses. Later, in 1833, Robert Brown used a microscope to discover the nucleus. More recently, the development of light and electron microscopes have enabled scientists to view living cells and molecules within cells respectively.(Enotes.com) Over time, theories become more mature, because of more available knowledge and more stable theories providing support. The passage of time allows the development of advanced technology and provides more valid data for scientists to use in their research.

My provided examples illustrate how experts in their respective fields had contrasting perspectives which allowed new theories to supersede old ones because experts can collaborate and eventually reach a consensus, developing a solid foundation. With peer review and revision, knowledge becomes more useful in many disciplines. Without the discovery of mistakes, knowledge in a discipline can become stagnant for a long time. So through disagreement knowledge can improve. An old Chinese saying states, “Failure is the mother of success.” Mistakes often provide important opportunities for improvement and achieving better results. So although consensus is often desirable, nurturing contrasting perspectives is one effective way of ensuring the quality of knowledge and the accuracy and health and of a discipline.

One Way to Assure the Health of a Discipline Is to Nurture Contrasting Perspectives. (2021, Dec 08). Retrieved from https://studymoose.com/one-way-to-assure-the-health-of-a-discipline-is-to-nurture-contrasting-perspectives-essay 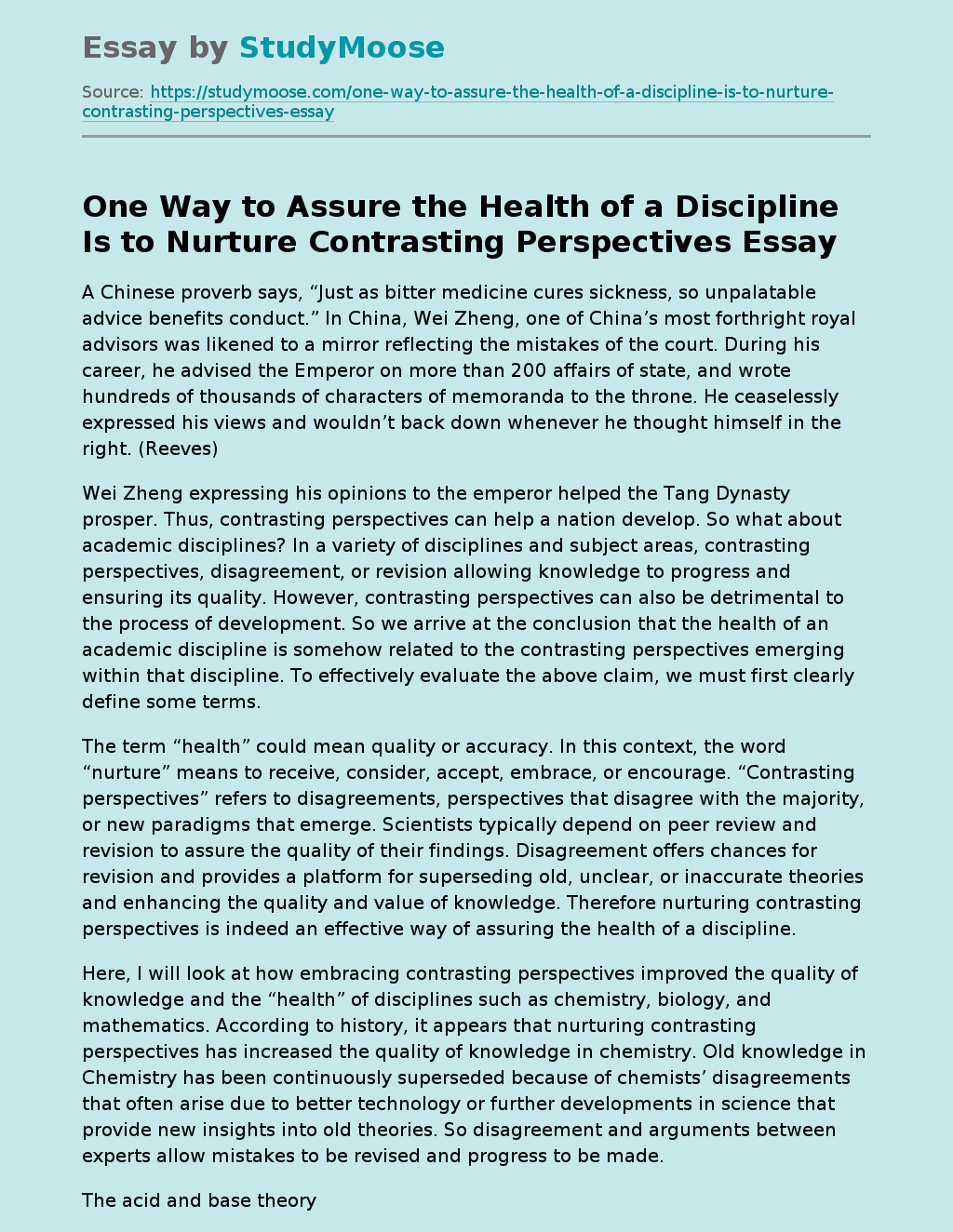