When reading narrative poetry it is just as important to look at how the author puts together his story as it is reading what the story actually says. In “Old Man Eating Alone in a Chinese Restaurant”, Billy Collins writes about reflection on the past and later understanding. Underlying is a theme of learning ppreciation for the things that we may not comprehend.

The poem is didactic in nature, teaching us that over time, we can come to realize the value of our environment.

The poem begins with the speaker declaring appreciation that he did not write a poem about an elderly man he had observed eating alone in a restaurant. He also conceded however that he might have never even had the urge to write the poem in the first place. The word “if” in the second line leads us to this idea.

As a young man observing, he might have been apathetic toward the situation. The speaker goes on to explain his reasoning for his appreciation.

He states that he would not of correctly assessed the situation he was in observance of. He would of felt badly for the patron dining alone, seemingly lonely with “not a friend in the world / and with only a book for a companion.” He completes his thought by stating a stereotype that the lonely old man, as many elderly do, would pay his bill with change out of a purse.

In the third stanza, the author begins to develop an understanding of why someone might choose to, rather than be forced to, dine alone.

He reaffirms his thankfulness for waiting to write the poem and begins to describe the fare. He writes about the exactness of the soup and the refreshment of the beer. He is admiring the restaurant for its quality. He continues, and for the first time, hints at the idea that he has come to replace the man he observed in his youth. “And my book… / … is so absorbing that I look up…” This indicates the he is now the one sitting at the restaurant, with only the companionship of a book. The speaker then brings up his perspective on the atmosphere of the restaurant.

He describes the light that passes through the windows at that particular time. “… italicizing everything it touches…” provides vivid imagery into the effect the light has on his surroundings. Lastly, he completes the picture by describing his waitress, both in likeness and in action. He comments on her common waitress uniform and the delivery of his meal. He completes the poem by confirming that he, in fact, is in the same position as the original old man. He is now sitting at his “favorite table in the / corner.”

Although the speaker of the poem remains constant, the role of the speaker is dichotomous. The persona begins as one of an observer describing a previous situation and the emotion it induced. He then transitions, detailing his later appreciation of that experience by explaining his current position and state. The initial tone of the poem is that of relief. The speaker is reflective and realizes that his impressions of the old man at the table were a result of him not having the understanding of appreciation that the old man possessed. Looking back, the speaker remembers taking an attitude of pity towards the old man. He recalls thinking of him as “poor bastard”.

But as the poem continues, and as the speaker begins to value the qualities of the restaurant, there is a sense of empathy from the speaker towards the elderly man. The subject of the poem also changes. As it begins focused on the old man eating alone, it transitions to the environment of the restaurant. The attitude towards the restaurant is a positive one. His description both of the cuisine and the atmosphere depict a pleasant experience.

Noting “how hot and sour the hot and sour soup is” and “the (waitress) who is smiling now…” both provide imagery as to what one would encounter on a visit to “Chang’s” restaurant. More importantly than describing the his environment, the persona is making a tonal transition toward the old man, now identifying with him as he describes all of the aspects, of the restaurant including the food, the light and the furniture, that the original subject would have observed. Holistically, the tone takes on an attitude of appreciation towards both subjects of the poem, revealing its theme of understanding the process of learning over time.

The persona in the poem is narrative toward the reader. His position enables him to teach the audience a lesson simply by recalling a prior situation and establishing his change of perception. He first admits in the first stanza that he is “glad” to have not written earlier about the subject of the poem.

He then while explaining why, draws the reader into looking at our own perceptions. He describes the old man in a manner that fits with our society’s lens. The poem transitions to reveal the theme, and teach the lesson that the persona has learned. Though it appears that he is simply describing his surroundings, he is in actuality helping the reading come to a new conclusion, as the persona has, about the experience of dining alone.

After analyzing the poem, I believe Collins wanted to share an experience, whether actual or fictional, of coming of age. As I mature personally, I can reflect on certain situations with a new perspective. The realization of our capability to appreciate different things over time is, what I believe, the main theme of the poem. As we age, there is a transition in what we value. Understanding and welcoming this, will ultimately lead to the discovery of a new happiness. 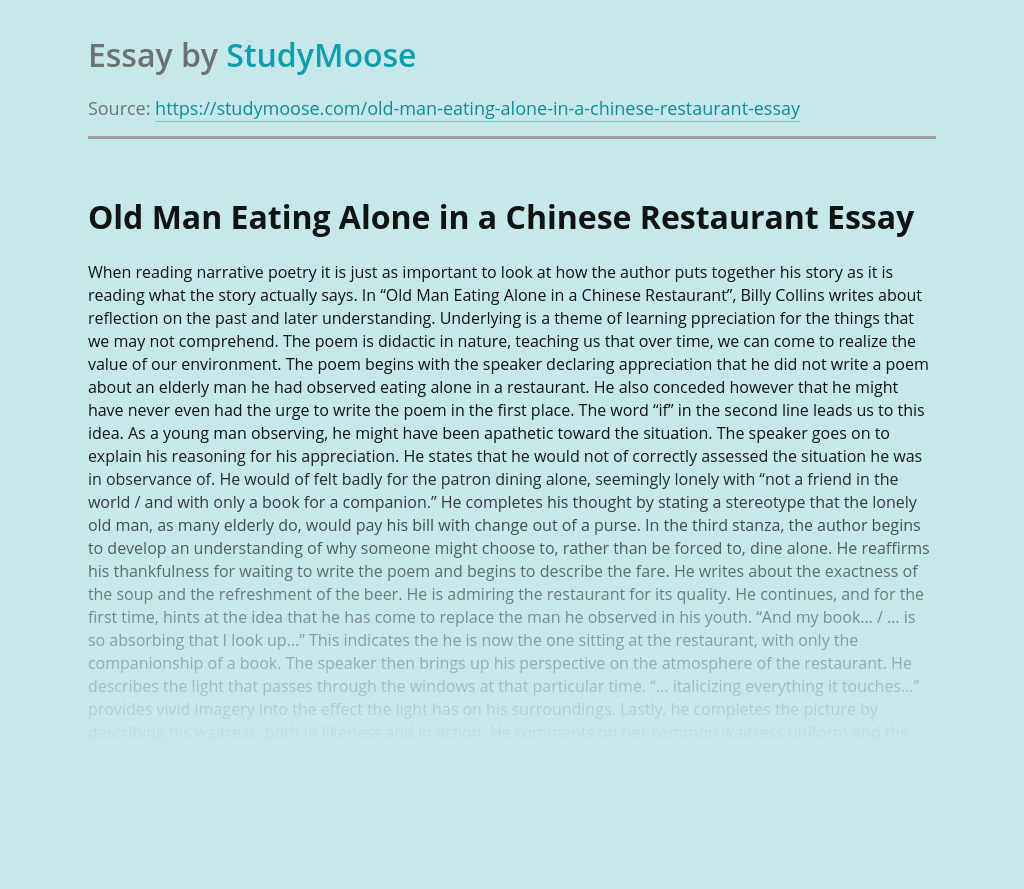 What is it to age? Is it to lose the splendor of the form, The lustre of the eye? Is it for beauty to bypass her wreath? Yes, but not for this alone. Is it to feel our strength Not our flower just, however our strength decay? Is it to feel each limb Grow stiffer,...

All the World by William Shakespeare

William Shakespeare has been considered the greatest poet of all times. Only school educated, this great poet acquired fame because he had an extraordinary power of observation which he tempered with his brilliant imagination that gave a creative boost to his art. He was also gifted with unique taste of music which helped him to...

Dylan Thomas was a widely known poet and author whose poems were extremely popular, such as “And Death Shall Have No Dominion” and “The Play for Voice.” He was born on 27 October 1914, and he died on 9 November 1953. He was preferred in his lifetime, and he is still known by his works...

The poems 'Spring Offensive' and 'Exposure' by Wilfred Owen

Compare how Owen uses the natural world to reinforce the suffering that the soldiers faced in the poems ‘spring offensive’ and ‘exposure’. Wilfred Owen was an experienced soldier who fought in World War One. He wrote poems based on his experiences in the war. Many of his poems focus on the ordeals of the soldiers...

The beauty of nature is so intense it can be overwhelming

Song of Myself is a poem of bold declarations that egotistically assert Walt Whitman’s place and purpose in the context of a world of immense scope and romantically instilled vigor. And yet located within this chaotic unfurling of identity there is one piece of the poem that stands out as a conspicuously reserved, reflective fragment....

Laurence Binyon's Poetry For the Fallen

Laurence Binyon wrote one of the best known and most frequently recited verses of the First World War. Across the world, and particularly the Commonwealth, the central stanza of his poem For the Fallen is regularly used to proclaim and affirm the resolve of nations and communities neither to forget nor overlook the effort and...