There are various methods for cleaning up oil spills. Some methods allow oil to be recovered, whereas others do not. Some methods are more expensive than others, some are more efficient than others, and some have more of an environmental impact. Regardless of the method used, cleaning up oil spilled on water is a very time-consuming and difficult task. In this activity, you will model various methods used for cleaning up an oil spill on water.

Dispersants are also not effective since they break down the oil which later sinks down to the bottom of the ocean causing harm to the deep sea environment which is where many of marine life is found, it also uses chemicals that are harmful to the environment.

Using the graduated cylinder, add 80 mL of water to each of the three containers.

Using the graduated cylinder, measure 5mL of vegetable oil. Slowly pour the oil into the first container so that the surface of the water is covered. Repeat the process for the other two containers. Clean up any oil or water that you spill. To clean up the “oil spill” use the skimmer (medicine dropper), sorbents (shredded paper), and a dispersant (powdered and/or liquid detergent). Remove as much oil from the oil-and-water mixture. Observe which method works most quickly and recovers the most oil and record all observations in the table. After finishing the following procedures, rank each method from 1 to 3, 1 being the most efficient and 3 being the least efficient.

Skimmer- Using the medicine dropper as a skimmer, collect the oil from the surface of one of the container. Pour the collected oil inside the dropper inside the oil tank (plastic cup). Repeat step 1 and 2 until you have collected as much oil as possible. Sorbents

The skimmer broke up the oil into smaller blobs.
It removed significantly more water than oil.
It took a much longer time to remove the oil

Shredded paper and spoon
Absorbed a lot of water along with the oil however, a significant amount of oil was left on the surface of the water. The Sorbents sunk down to the bottom of the container.

Detergent and spoon
Detergent sunk down and then broke the oil into smaller blobs. It took a long time before the detergent had any effect.
Took about 15 minutes for the oil to sink down to the bottom of the container. 3

When you slowly poured the oil onto the water, did it float or sink? Explain your observation in terms of density. When the oil was poured onto the water of each container, the oil floated. This is due to the fact that, any substance that has a lower density than the other fluid, the substance will float. In this case, oil has a density of 0.88g/cm3 whereas water has density of 1g/cm3 which means the oil will float atop of the water because it has a lower density than water. Which of the three methods do you think would have the least impact on the environment? Explain. The skimmer was able to recover almost all the oil with the least impact to the environment. However, it also removed a lot of water from the container and took much longer than the other methods. On the other hand, Dispersants made it much easier to remove the oil with the spoon but it introduced harmful chemicals into the environment which could have had devastating effects on the environment. The Sorbents were also very ineffective because it did not remove sufficient amount of oil and also sank to the bottom which could result in the death of many sea creatures mainly because there isn’t really a “giant spoon” to remove the sorbents from the ocean in real life situations, this goes the same to Dispersants, because the small oil blobs had to be removed manually by using the spoon. If a strong wind was blowing and the surface of the water was rough, which method do you think would the best? Explain. Using Dispersant would be the best method because it will break down the oil into smaller blobs which will than sink down to the bottom. Although this may have a negative effect on the environment, it will still remove the oil from the surface of the water. On the other hand, using sorbents will not remove sufficient amount of oil and may have a negative environmental effect. Using Skimmers will also be ineffective since they only work on calm waters.

Was cleaning up your oil spill more difficult or easier than you thought it would be? Explain. a. It was much harder than I thought it would be because we had to wait for some of the effects to happen to the oil-and-water mixture for some methods. We also realized that we had to be more careful and precise.

The Amount of Oil recovered

Took a bit more than the reasonable amount of time because we had to be more careful. It also took longer at the end because the oil broke up in smaller blobs. It recovered most of the oil. However, it also removed a lot of water which left us with about half of what we had at the end of the experiment. It also had the least impact on the environment b. Dispersant

The Amount of oil recovered

The Amount of oil recovered 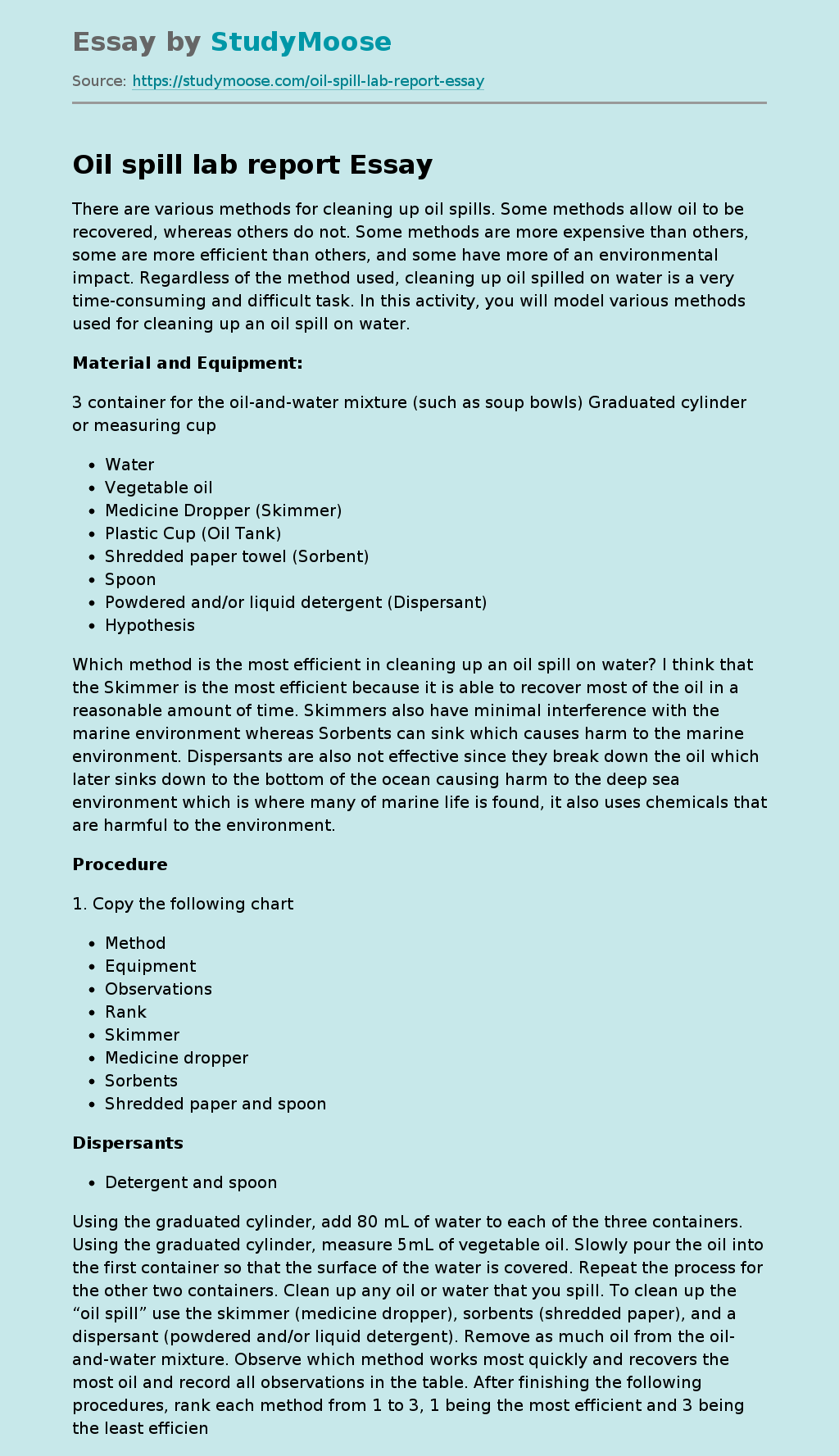