Of Mice and Men Foreshadowing

Of Mice and Men is a Novella written By: John Steinbeck. This book is about two friends who face the challenges of humanity and the world around them. In the novella of Of Mice and Men, John Steinbeck uses foreshadowing to give the reader hints or clues about other events in the story. John Steinbeck uses foreshadowing with the event of the Killing of Candy’s dog, Curley’s wife is a “rat trap”, and Curley harassing Lennie throughout the novella.

Turn in your highest-quality paper
Get a qualified writer to help you with
“ Of Mice and Men Foreshadowing ”
Get high-quality paper
NEW! AI matching with writer

One example of foreshadowing is when Carlson kills Candy’s dog. And this foreshadows that George will kill Lennie, because they were both put out of their misery, and that when Candy said “I ought of shot that dog myself” (61). And when George kills Lennie at the end of the book they both wanted to kill them by their selves even though George did do it himself. If George didn’t kill Lennie himself he would hav ended up getting tortured and killed by someone else he just felt better if he had did it himself

Another example of how John Steinbeck uses foreshadowing is when they say that Curley’s wife is a “rat trap” that fore shadows that Lennie will talk to her and might go farther and end up touching her more roughly because he likes soft things and doesn’t like to let go like he did in WEED and ended up getting ran out of WEED.

So when Curley’s wife lets Lennie touch her soft hair that was a bad decision on her part because he kept getting rougher and when she tries to say stop and go away Lennie won’t let go.

So Curley’s wife screams and Lennie gets scared and then grabs her and tells her to stop but in the process he snaps her neck because he doesn’t know his own strength he can’t control it.

Finally, foreshadowing can be seen when Curley harasses Lennie for not talking and because he is bigger than him. That foreshadows that they might get into a disagreement or an argument possibly a fight. So when George was talking for Lennie, Curley said “let the big guy talk “. But earlier that day George told Candy ,”well he better watch out for Lennie, he aint no fighter but he is strong as a bull” (27). Because Lennie is very strong. Curley doesn’t like bigger guys which Lennie is. So I drew a conclusion that they will most likely fight which they do and Curley was beating Lennie until George told Lennie “GET HIM!” Lennie crushed his hand because of his uncontrollable strength he has.

Of Mice and Men Foreshadowing. (2016, Sep 21). Retrieved from https://studymoose.com/of-mice-and-men-foreshadowing-essay 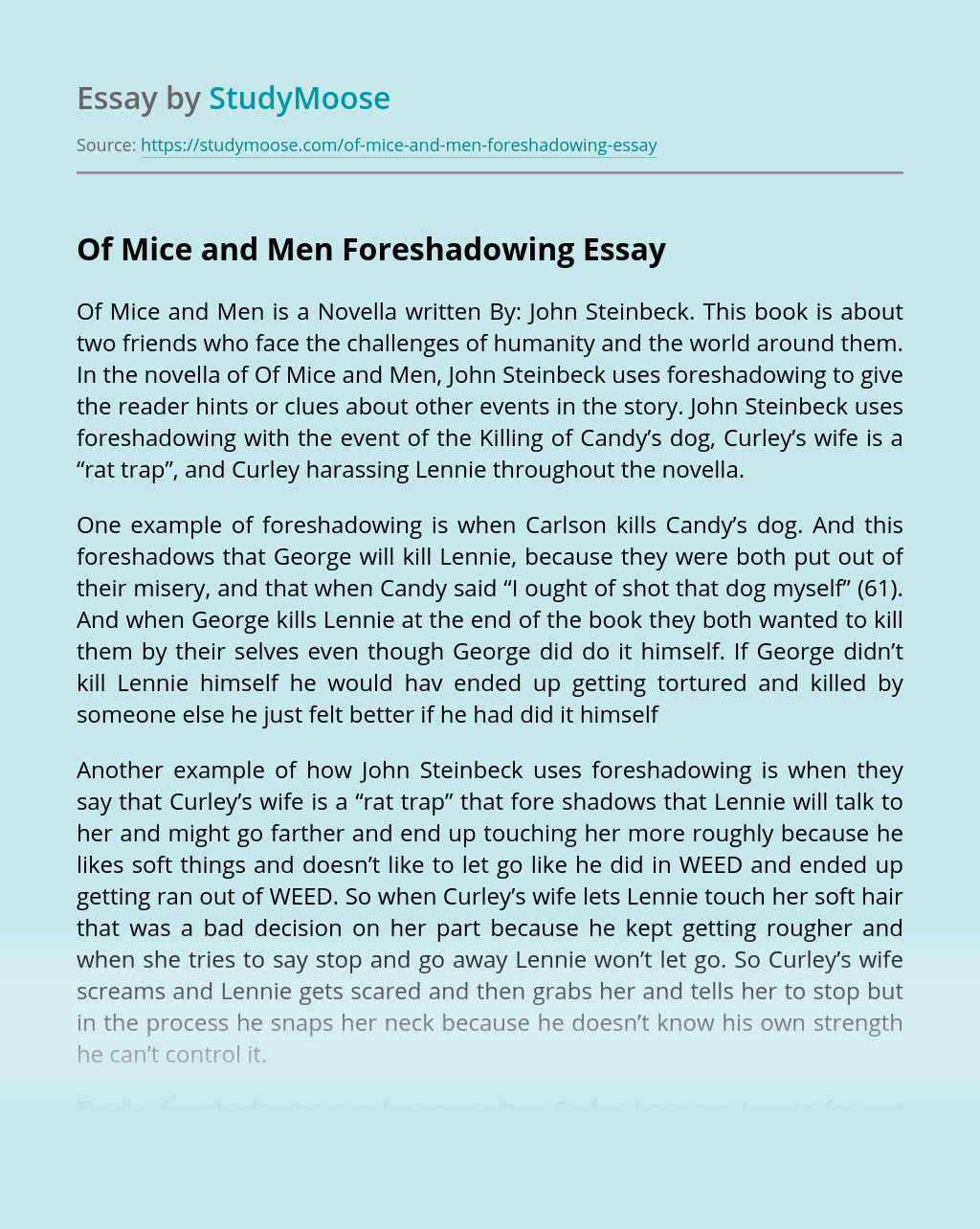 Turn in your highest-quality paper
Get a qualified writer to help you with
“ Of Mice and Men Foreshadowing ”
Get high-quality paper
Helping students since 2015
Stay Safe, Stay Original