Of Mice and Men - 5 Diary Entries

We travelled from Weed today. God damn bus driver dropped us off ‘least 10 miles from the ranch and told me it was just down the road. God if I see that damn driver I’d break his neck.

Me and Lennie found a nice place to sleep for the night. If Lennie hadn’t been so God damn stupid we’d still be up in Weed rollin in the cash but Lennie had to do somethin’ wrong didn’t he, dumb bastard, jst like he always does.

Don't use plagiarized sources.
Get Your Custom Essay on Of Mice and Men – 5 Diary Entries Just from $13,9/Page

Every thing was goin; O.K in Weed and I’ll be damned if we can find a better place than that to work at. I sure hope Lennie don’t go grabbin’ no other girls just to feel a damn dress.

I’ll never be able to fix up a stake if that dumb bastard stays dumb forever. I love Lennie but it’s hard movin’ from ranch to ranch with him there all the time.

I’ve told him if he gets in any more trouble to come back to this very spot in the brush.

Lennie sure is stupid, earlier he was carrying a dead mouse just to pet it. I dont know what i’m gonna do with him every time he gets upset I have to tell him that dumb story about the house where we will have rabbits and an alfalfa patch and he can pet the stupid rabbits. Who knows maybe one day that dream might come true but I don see that day coming soon.

Me and Lennie met a few people today. There was this old guy called candy and he’s got a stinkin’ old dog. He’s quit a nice fella though he told me about Curley and his wife. I met Curley just a bit after that convisation with Candy, he came in asking for his wife. He had a go at Lennie for no god damn reason at all. Candy reckons it’s just coz Lennie’s bigger than him. Curly’s one of those small guys who hates big guys, but he better not pick on Lennie coz Lennie may be dumb but hell he’s strong as a bull

Earlier I was angry with Lennie coz he spoke infront of the boss when i told him not to.I had to tell the boss a few lies because he realised that Lennie was dumb and the boss wanted to know if I was hangin’ round with him to take his pay check off him at the end of the month.I told him that me and Lennie were cousins so tha is why we hung round together, good job that ain’t true coz if I was any relation to Lennie i’d kill myself.

I met a real nice guy today called slim. He introduced me to everyone workin’ at the ranch and he thought it was good to see two guys like me and Lennie hangin’ round together coz he said that you don’t often see two guys hangin’round together.

Although I’m gettin’ on O.K at the ranch with all the other guys and stuff, I cant help thinkin’ about the chance of Lennie and Curley gettin’ into a fight coz Curley was real mean to Lennie earlier. If Curley tries to start a fight with Lennie then Lennie gonna have to smash him back. I know that Lennie would never mean to cause any trouble but if Curley starts i’m gonna let Lennie fight back coz guys like Curley need to be taught a lesson. I ain’t sittin’ back and watching Curley beat up Lennie coz that ain’t right.

Curley’s wife worries me aswell coz Lennie really likes her and he could get into real trouble if he does somethin’ like in Weed. Candy told me that she always eyein’ all the guys up. The thing that really gets to me is that Curley’s wife might give Lennie the eye and he might do somethin’ stupid, I just hope he doesn’t.

Today Candy was listenin’ in on me and Lennie havin’ a chat, normally I don’t like people listenin’ in on me but Candy had somethin’ interesting to say. He wanted to join the little dream me and Lennie ‘ave got of gettin’ our own little place and land and a few crops an’ animals. He’s got $350 to help buy the land. Since he aint no harm and he’s probabally gonna die soon we decided to let him come.

The dream that was just a dream is now comin’ to reality just coz that old man Candy. Im gonna get hold of those old people an’ tell ’em im gonna buy the house, at the end of the month we will have $450 and then I’d keep workin’ on the ranch to pay off the rest.

One day soon we might just be able to do it. We couldd get the little place of our own with a few acres of land and crops to grow, and rabbits coz Lennie’s always on about how he will tend the rabbits. Of course most guys dont believe us bout the dream coz i bet they had dreams just like us and watched ’em fall apart loads of times.

This whole idea of our own land has made Candy have a bit of hope, poor bastard, Carlson shot his dog last night to put it out of misery, I mean it was old, smelly & decrepid it was for the best. Slim offered him one of his new pups, Slim also gave a pup to Lennie which was really nice of him. Lennies pretty dumb and he loves petting things I hope he jus’ dont do nothin’ stupid like on our last job and blow the chances of the house.

I new somethin’ bout that Curley couldn’t help but pick a fight with Lennie. Lennie hadn’t done nothin’ wrong either, he was standin’ there smilin’, thinkin’ bout our dream an’ Curley came in the bunk house in a mood an’ seen Lennie laughin’ and he socked him right in the chops and hittin’ and hittin’ him, Lennie was jus’ standin’ there takin’ it. So I told Lennie to fight back so Lennie grabbed hold of Curley’s fist and started crushin’ it like a tin can, Curley was floppin’ like a fish, Lennie must of broke every bone in his damn hand.

Thanks to Slim we shouldn’t get canned coz he made it pretty clear to Curley that if he told anyone how this happened he would say how easily Lennie crushed his hand. Curley agreed not to tell anyone, so hopefully all that is all settled. I thought that would of ended our chance of the dream.

I was right in what i did wasn’t I? If they caught Lennie they would strap him up in a cage in one of those nut houses. It was the right thing to do! If Curley had caught him he would of tortured him and made him die a slow death. Atleast when i shot him he was happy and peaceful thinkin’ about the dream and not scared. Now Lennies gone im gonna be just like any other ranch worker, lonely and without a loving friend, it’s gonna take me a while to come to terms with what i’ve done, killed my only and best friend.

Me and Candy aint gonna carry on with the dream, theres jus’ no point Lennie was the life and soul of the dream now he’s gone so has the dream. No doubt Candy will be upset and miserable but there ain’t nothin’ I can do about that.

Slim and Carlson took me for a drink and told me that it wasn’t my fault and that I had to do it, I guess they’re right after all it was me or Curley and I ain’t lettin Curley touch Lennie. I probably gonna move on to a different ranch and carry on workin’ somewhere else alone. 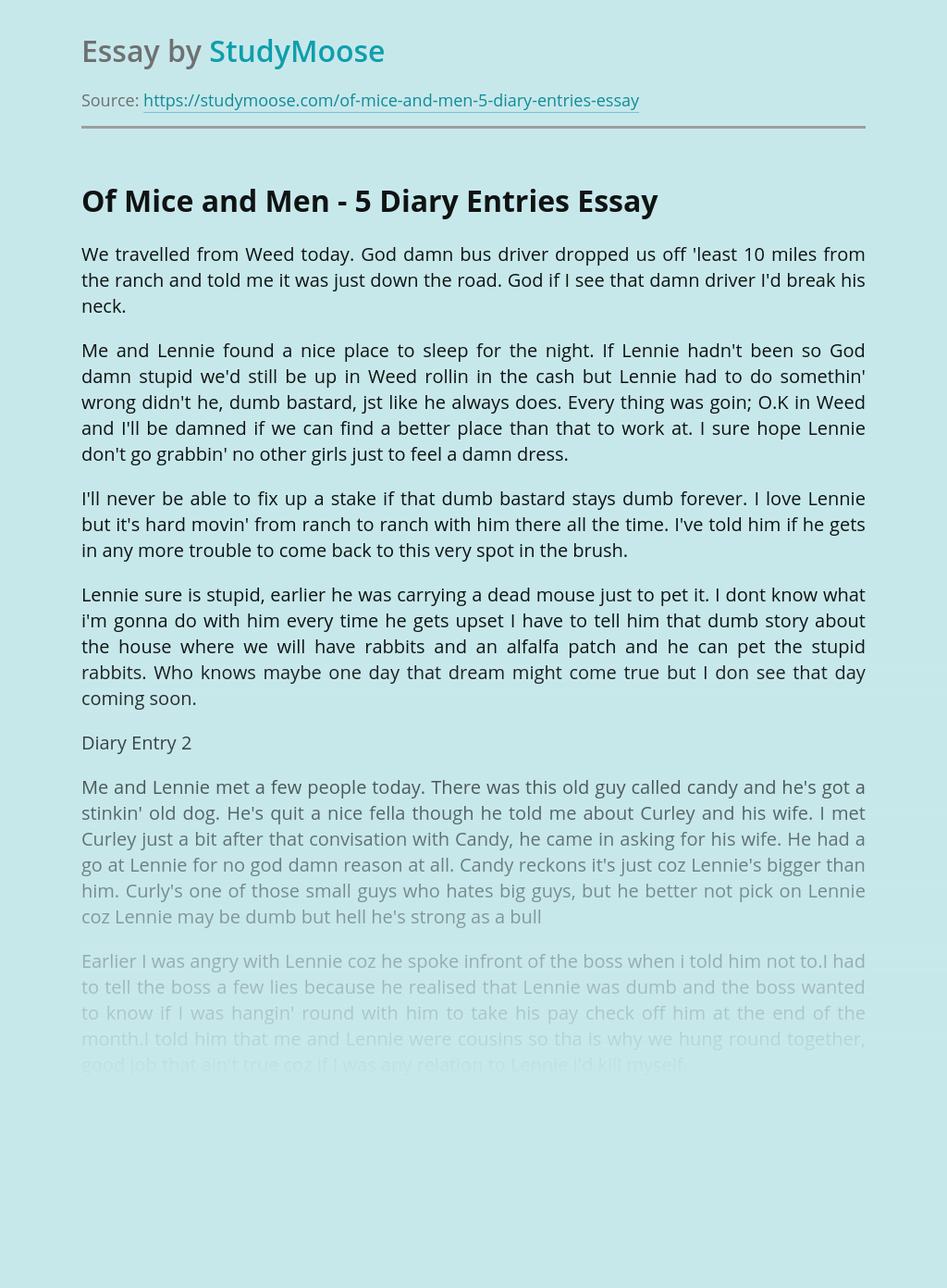 Revies Of Related Literature And Studies

According to the article of Grace Melanie Lacamiento 2012 entitled Mobile apps could be huge export product for Phl, the tremendous growth of Smartphone usage in the country make the creation of mobile applications a lucrative option that local developers and start-up technopreneurs should look into. Alvin Gendrano, director of Microsoft Philippines Developers and Platform...

Cheryl Albury in the book” Perspectives from Inner Windows,” reveals many of the social problems that we face in Bahamian society. In her stories “Waiting for Love” and “Pot of Gold” she uses them to reflect on some of the characteristics of Bahamian Men. From these two stories Albury portrays men as manipulative and selfish....

A lot of companies and organizations needed the help of computers because of its speed, precision and productivity. Moreover, many businesses flourished because production was increased and human errors were lessened and management decisions were facilitated through accurate and reliable information generated by software applications. The business world has become dependent to the massive use...

Abstract Compelling evidence suggests that regions of the United States face a nursing and physician shortage that our legislators, health officials, and medical professionals must address. To ensure that quality medical care is not harshly impacted, the hospitals and public health leadership, in general, will need to tackle the nursing shortage with solid long-term solutions....