Obedience to Our Parents

To be obedient is to obey the orders of one’s elders and superiors. There cannot be order unless there is obedience. One has to obey the laws of the country, otherwise the society cannot exist. The laws may be irksome, but, for the overall good of the law one must obey them. For instance, the laws to be obeyed on the road ensures road safety. The laws pertaining to property help society continue without hitches and hindrances. Even in our body our limbs obey the commands of the brains unless they are diseased.

Don't use plagiarized sources.
Get Your Custom Essay on Obedience to Our Parents Just from $13,9/Page

Obedience is essential for the enforcement of order.

Obedience includes obedience to one’s parents and elders. Parents are the best well wishers of their children. From their experience, they know what is good for their children. They would never mean ill for them. For the sake of the well being of the children, parents insist on obedience. Obedient children grow into fine children. They are not only loved by their parents but also by others connected with the household and by the neighbours.

It is our duty to obey our parents, that is, to do always what they tell us to do. All that we have is given to us by our parents food, clothing and education. They tend us when we are too young to do anything for ourselves. They watch over us in times of sickness, provide for our amusement, teach us the principles of their religion, and guard us from evil influences. Obedience is a very simple way of showing gratitude for these benefits. It is a way that is well within the reach of the young infant as well as the full-grown son. Parents are not only the providers of benefits, but are the guides of their children in all the relations of life. There may be cases where a father and a mother prove themselves unworthy of their children’s regard; but it is usually found that parents are as solicitous for their children’s welfare as their own. Being adults and having experience of the world, they are in a position to form better judgments than their children.

Therefore not only is it the duty of a child to obey his parents, but in doing so he is consulting his best interests. Just as the boy who would learn to eat must attend to the instructions of his teacher, so those who wish to grow up into honest and useful men must follow the dictates of their parents. The captain, when entering a strange port trusts to the pilot to guide his ship safely. Our parents are our pilots. We sail in strange waters, and our safety depends on submission to the directions of those who are more experienced. We are not always well-advised in our choice of companions. When the time comes for us to decide what trade or profession we are to follow, when misunderstanding and perplexities arise, be done; and it is our duty to obey implicitly, for love and experience combine to give value to their advice. Examples of disobedient sons and daughters are but too common in this world, and very regrettable have often been the results of this disobedience. In former times, among the Romans, it was considered a serious crime, and the father might, if he was so minded, punish it by death.

One of the ten commandments given by God to the Jews was: “Honour thy father and thy mother, that thy days may be long in the land which the Lord thy God gives thee.” Disobedience is base ingratitude, and one of the greatest cruelties a child can inflict upon a parent who has toiled for years for his sake, and lavished upon him all his affections, regardless of self. It is a crime which brings its own punishment. How bitter must be the remorse of one who, standing by the deathbed of a parent, remembers all that parent’s love and constant unselfishness, which have been repaid by disregard for his wishes and outspoken contempt for his orders! Obedience, in human behavior, is a form of “social influence in which a person yields to explicit instructions or orders from an authority figure”[1] Obedience is generally distinguished from compliance, which is behavior influenced by peers, and from conformity, which is behavior intended to match that of the majority.

The experiment showed that obedience to authority was the norm, not the exception. Regarding obedience, Stanley Milgram said that “Obedience is as basic an element in the structure of social life as one can point to; Some system of authority is a requirement of all communal living, and it is only the man dwelling in isolation who is not forced to respond, through defiance or submission, to the commands of others.” [2] A similar conclusion was reached in the Stanford prison experiment.

Obedience to Our Parents. (2016, Oct 11). Retrieved from https://studymoose.com/obedience-to-our-parents-essay 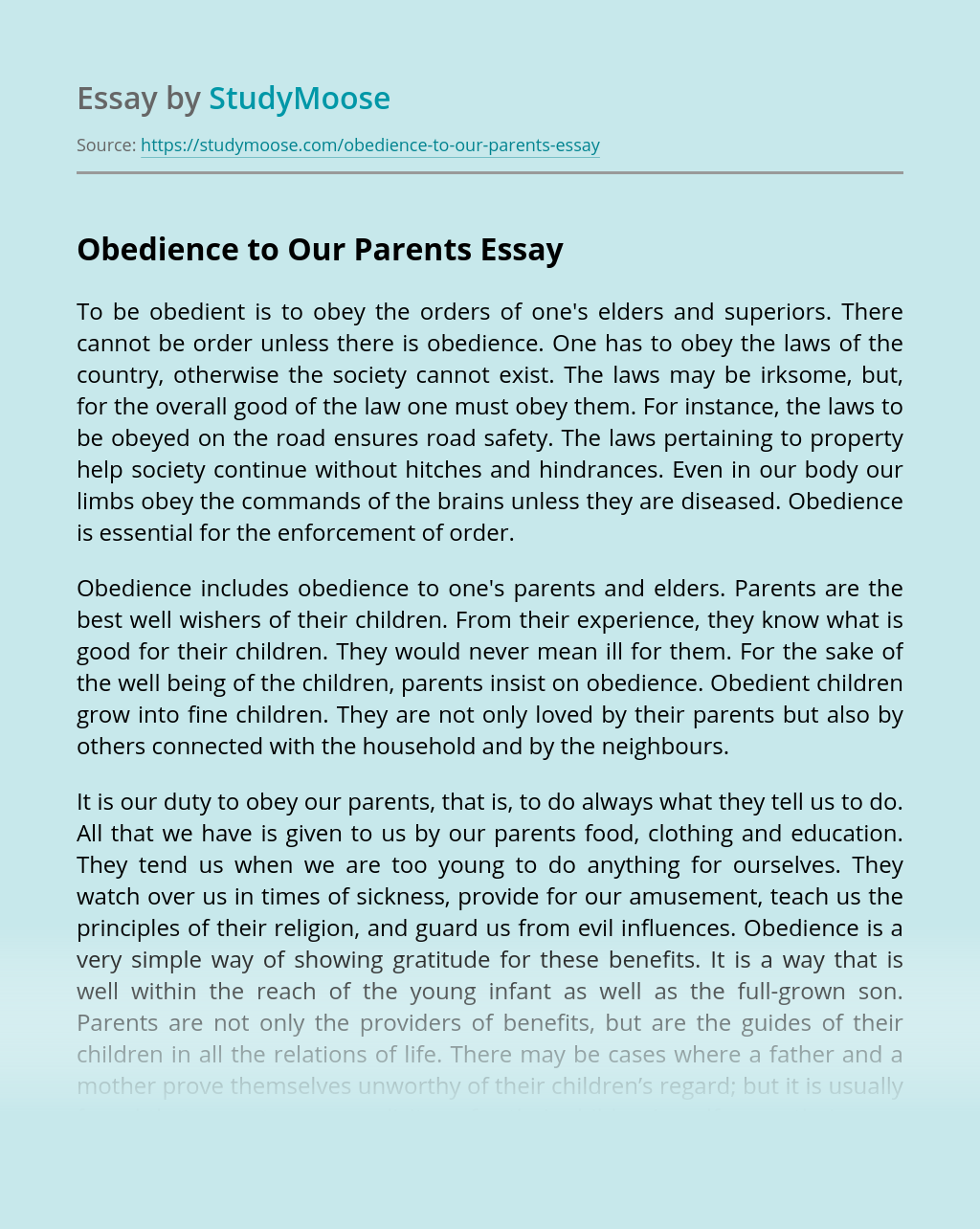 To establish and maintain a safe, healthy learning environment. Safe- My goal is to provide a clean healthy environment that meets each Childs physical need. Making sure the class room and playground are clean and safe at all times make sure all my outlets have outlet covers so the children cant access them also make...

Communication is a part of life. The ability to communicate clearly and effectively is one of the main skills that people have. The use of technology can be a great opportunity for people in communicating, reducing time. But technology can have consequences of reducing person-to-person interaction without the device. Today communication technology has rapidly developed....

Hey Guys, This Is Awesome Tutorial Written By Me And Note That This Is Not Any Type Of Fake Methods, This Is Real And Worked Method To Hack Facebook In Just Couple Of Minutes, In This Trick You Just Need Three Friends In Victim’s Account. If You Have This Then You Can Easily Hake Your...

In her inspirational speech on the TED television series, Chimamanda Adichie argues that single stories of specific races or regions often create misconceptions of their true natures. Adichie, born and raised in colonial Nigeria, uses previous life experiences to support her claims regarding false stereotypes, most evidently during her childhood and her first visit to...

This resource can be used for general classwork, homework or learning skills for investigation. It is a good simple exercise in bringing the various terminologies together in understanding what it means, and how it can be used in context. This allows the pupils to bring out more in discussion and understand that the topics covered...