Nursing As a Discipline

Turn in your highest-quality paper
Get a qualified writer to help you with
“ Nursing As a Discipline ”
Get high-quality paper
NEW! AI matching with writer

Nursing as a discipline has interrelated relationships between nursing practice, knowledge and research and these relationships help to advance the discipline of nursing. Is nursing a profession or a discipline? The goal of the discipline is to expand knowledge about human experiences through creative conceptualisation and research, (Parse, R.R, 1999). The goal of the profession is to provide a service to humankind through living the art of science, (Parse, R.

The discipline of nursing encompasses the knowledge in the extant framework and theories that are embedded in the totality and simultaneity paradigm, (Parse, R.R, 1999). The profession of nursing consists of person educated in the discipline of nursing according to nationally regulated defined and monitored standards, (Parse, R.R, 1999). You can see that nursing is both a profession and a discipline and you can see that there are interrelationships between nursing practice, knowledge and research.

In nursing as a discipline you can see that there is an interrelationship between nursing practice, knowledge and research. It has been said that that understanding of knowledge base is essential for judgement and decision-making that occurs before, during, and after the actual tasks are preformed, (Evans, R.J, 2006). This shows that the relationship between nursing practice and knowledge is strong and can be seen in everyday practice. “An awareness of the relationship(s) between skills and other competencies is essential to understanding the complexity of the dynamics of nursing practice”, (Evans, R.J, 2006). This shows the importance of being able to back up the choices made with the knowledge and research.

The relationship between knowledge and research is just as important as the relationship between nursing practice and knowledge. Having that relationship allows for the knowledge to be gained by research and in the overall picture is allows for the interrelationship between nursing practice, knowledge and research to be seen by others that are not in the health care workforce. |A proposed model that builds on work by Benner, (1984), illustrated that nurses moves through a number of phases in nursing, from novice to expert. The authors here propose that the knowledge, skill and judgement possessed by the nurse also pass through the same phases. The skills implemented by a nurse are not performed contextually free. They are always supported by the knowledge acquired through basic and continuing education, experience, research findings, and intuition that nurses develop as they move through Benner’s levels of novice to expert. The performance of a skill cannot stand alone; it is always supported by the knowledge and judgement. The second part of the model revolves around the understanding that knowledge, judgement, and their skills and their interrelationship do no remain static.

Nursing As a Discipline. (2016, Mar 10). Retrieved from https://studymoose.com/nursing-as-a-discipline-essay 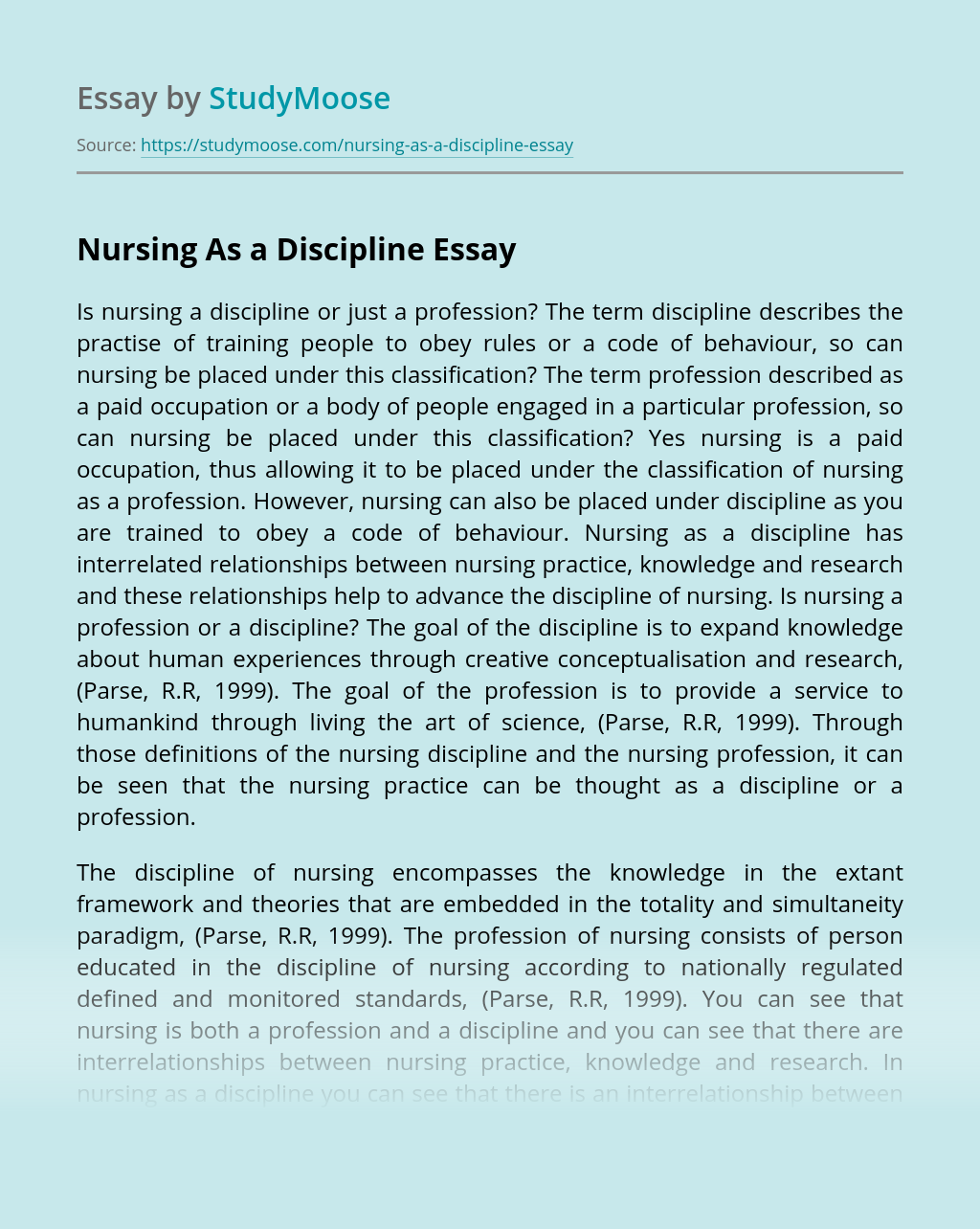 Turn in your highest-quality paper
Get a qualified writer to help you with
“ Nursing As a Discipline ”
Get high-quality paper
Helping students since 2015
Stay Safe, Stay Original