"Not My Best Side" U A Fanthorpe

In “Not My Best Side” U A Fanthorpe challenges the traditional, stereotypical characters in the legend Of St George and the dragon only to replace them with another equally stereotypical set

In the poem “Not my best side” U A Fanthorpe has challenged the orthodox images of the characters in Uccello’s painting of St George and the Dragon. She has successfully manipulated them into modern day caricatures.

Through traditional stereotypical views and legends, Uccello has portrayed the fire-breathing dragon as grotesque and beastly.

Yet this is the dragon whom a boy no older than a teenager, can tame. The poem contrasts any stereotypical view the reader may have taken and reveals that the dragon is no more innocent than the other characters.

In the first sentence of the first stanza, the reader is confronted by a dress conscientious victim of fashion; this is hardly a fire-breathing monster. The dragon criticises all but himself, from the painter Uccello who, “didn’t give me a chance to pose properly” to the, “horse with a deformed neck”.

Fanthorpe has given such a beast a pitiful personality the painter is described as a, “poor chap” however this is not an obvious reaction expected from such a beast. The phrases used by the dragon portray how the poem is the inverse of the painting itself.

The fact that the angle of the picture was not in his favour has proven to disappoint the dragon deeply but he forgets the fact that he is about to be defeated and overcomes this with an answer; “I always rise again”.

The character is quick to point out such supposed absurdities as, “what, after all are two feet to a monster?” and how his conqueror travels on a horse, “with a deformed neck”. His questions convey his unhappiness of being mocked, from his point of view his killers and victims appear to be blind, juvenile or ugly. Not taking things, as seriously as he should, the dragon tends to ask rhetorical questions: “should my conqueror be so ostentatiously beardless?” and, “Why should my victim be so unattractive as to be inedible?” The character does not think why they should take him anymore seriously than he is prepared to take them.

Two diametrically opposed personalities, one from Uccello’s painting of St George and the Dragon, the other from U A Fanthorpe’s poem of “Not My Best Side” are never the less the same person. Painted unnaturally white and almost glowing, the young woman in the painting could be described as a symbol of virginity. She would be insulted to be given such a personality to the one in the poem where her casual sexual attitude is most noticeable in the double entendres: “wearing machinery” and, “see all his equipment” throughout the stanza. How these phrases are interpreted, is up to the reader. Half way through the second stanza the reader infers that she would have focused her attention on another issue but instead she is now talking of how she would “enjoy” being eaten by the dragon and assumes that all girls would like the same. Fanthorpe has prescribed to the girl a rather a modern woman’s personality rather than the image of a more biblical girl.

Her language and her sentences are modern and appear slightly immature. One would usually associate phrases like, “And the way he looked at me” with a teenager. One would not assume a religious orthodox figure to be using phrases such as, “he might have acne, blackheads or even bad breath”. As well as being critical she also insults her hero’s manhood, “when this boy turns up”. Indeed her declaration” I didn’t much fancy him” shows her first thought that apparently ran through her mind when she was about to be rescued from death by the very same boy. Fanthorpe has created a similarity between the two characters of the dragon and the young woman. Both are far more concerned with their image and what others think of them than the reality of the situation. It could be said that her second stanza creates a less than glamorous image of today’s new woman.

St George. The legendary character who is said to be the fearless slayer of the almighty dragon. However in this stanza, St George shatters our illusions as Fanthorpe allows St George to speak for himself. He is boastful about his, “machinery” and brags how he is educated to a degree in “Dragon management” and so-called “Virgin Reclamation”. Even his horse now sounds more like a car as he mentions it has, “Automatic transmission”. The first five lines of the stanza show how the traditional story has been put into a modern context.

They also show how his own stupidity can make a mockery of him. His words, “Virgin Reclamation” are an example of his arrogance because he hopes to impress by using words longer than two syllables. Also he thinks that killing is a form of “management.” Such euphemisms and vocabulary choices not only make him look ignorant and boastful but also are not the words that should be coming out of the mouth of a true hero. His, “custom built spear” makes him sound like a modern day hero, a James Bond, type but as he is only a boy he has a good few years remaining before he takes on the role. By giving St George elaborate twentieth Century technical vocabulary Fanthorpe has escaped from the biblical sense of the picture to a stereotypical and has equalled him to a modern day Essex man.

He attention seeking makes him appear snobbish, “You can’t do better than me…I’m qualified and equipped”. The reader would expect that it would be highly discomforting to be rescued by a hero with this bragging persona. Fanthorpe has created a complete inverse of the legendary character. St George’s more chauvinist qualities leak through when he intimidates the woman by asking her how or if she would like to be rescued.

He is expecting her to take on the role of Sleeping Beauty waiting for the strong and handsome prince. St George’s expectations are worked when he tells her that she could be, “endangering job prospects” if she does not wish to cooperate. Here, he has taken on a very sexist attitude, and although it seems as if he would like to save the lives of others, once again he shows his ignorance by telling her, “What…does it matter what You want? You’re in my way”. He is only thinking of himself. Here in the third stanza is the third vision of a selfish personality. Fanthorpe’s modern day caricatures are not complementary!

The three characters in this poem hold quite different opinions yet are extremely similar in the way that each character is as different as the other. They do not like being criticised but do not think how their insults to others are even more critical, “Unattractive as to be inedible.” In each of the stanzas the characters start off with good-natured comments but as they progress to the end of the stanza the points they have made appear ruder and their egotism reveals itself. The last lines all end with a sarcastic comment.

All the characters are not too worried about anyone but them self. Over all they are looking after the image of number one, which seems to be the only thing that matters. Fanthorpe’s images of three types have little of the spiritual among them. As I read about thoughts, which are materialistic, vain or lustful, I learn that Fanthorpe seems concerned with showing us not our best sides. 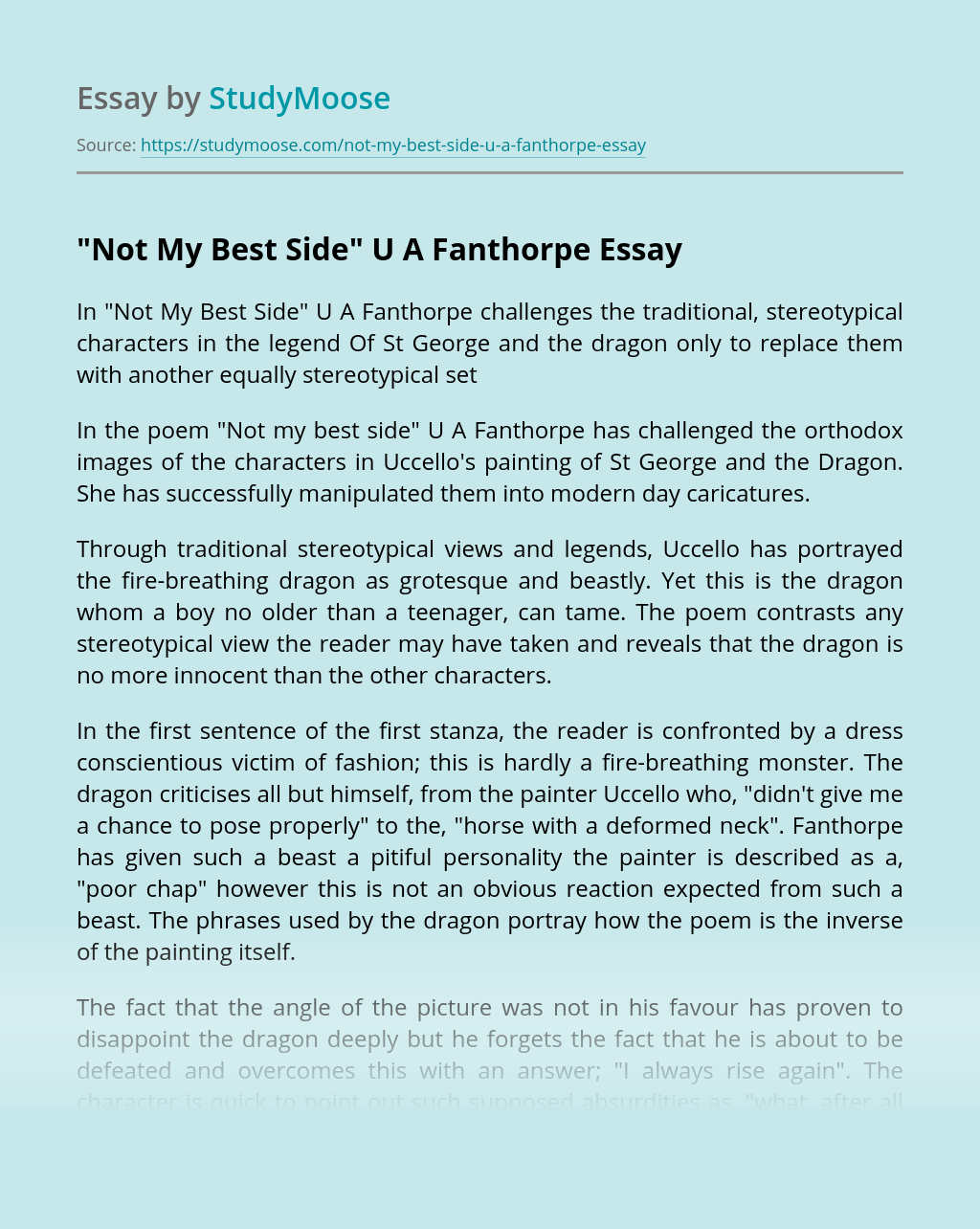 Don’t waste time
Get a verified expert to help you with “Not My Best Side” U A Fanthorpe
Hire verified expert
$35.80 for a 2-page paper
Stay Safe, Stay Original