Should Nike be held responsible for working condition in factories that it does not own, but where sub-contractors make products for Nike? Nike doesn’t own any manufacturing facilities and outsource its production. Therefore, it can’t be directly blamed for terrible working conditions. Nike can influence indirectly on working conditions at contracting factories thorough refusing to work with sweatshop factories.

However, Nike, like any other capitalistic enterprise, is looking for economy of scales and making more money for its shareholders, so each dollar counts.

Don't use plagiarized sources. Get your custom essay on
“ Nike Sweatshop Manufacturing ”
Get custom paper
NEW! smart matching with writer

In this case, Nike business ethics is being questioned. From another point of view, workers and employers have a voluntarily contract engagement and working conditions are on the same level as at other local enterprises.

However, if Nike claims to be a social responsible corporate citizen, it has to maintain business practices accordingly. They have to influence their partners to provide better working conditions and avoid long hours for child labor. Otherwise, they should be like everybody else and benefit from prevailing business practices in the third world countries.

Nike has to follow traditional labor standards prevailing in the supplying countries due to the absence of ownership for production facilities. It will be almost impossible to impose American labor standards regarding safety, working conditions and overtime into a foreign country, because they all have their own authorities that regulate these issues.

Cheap labor is their only competitive advantage to attract foreign direct investments. Changing labor standards in compliance with the US regulations will lead to factory overhead expenses increase and lose of economies of scale.

Therefore, Nike should follow the current regulations and try to improve the standards and working conditions at their supplying factories to a certain acceptable extent.

Nike shouldn’t be solely responsible for the low pay rates for its subcontractors in Indonesia. It reflects the current labor market situation and the way local economy operates. However, Nike should do their best to influence the improvement of working conditions and pay rate increase at its subcontractors. Not only Nike exploits that the benefits of low pay rates in Indonesia, but, other foreign companies as well. It should be a common strategy to influence the improvements. These changes can’t happen at once, it should be a long-term strategy for the benefit of local workers. For instances, the average hourly pay rate is $1.3 in Moldova.

This number is significantly low than in the Western Europe. Many Western businesses are exploiting this advantage. China is another good example where average monthly salary has risen from $250 in 2005 to $600 in 2012. It was the government of China policy to increase salaries. Therefore, local governments should influence the pay rate increase, and MNE will follow the rules of the game.

Charging premiums for their products, Nike can afford be more accurate in selecting subcontractors and promoting better working conditions on sites. Nike hired onetime US Ambassador to the UN, US Congressman, and former Atlanta Mayor, Andrew Young, to assess working conditions in subcontractor’s plants around the world. He made a mildly critical report spending two weeks and visiting 15 factories only. It is obvious that the report was subjective and led to even more critics from human rights and labor groups. Nike should have been more objective showing more opportunities for improvement and making more positive publicity from eliminating trouble issues.

Nike policies have to be updated to the modern conditions and business environmental requirements. Nike should care not only about its shareholders, but, about all stakeholders, including suppliers and consumers. These new trends should be stated in their policy clearly.

It means that this Association was supported and funded by the companies whose operations they should examine. There is an obvious conflict of interests. It is more likely a tool for industry to protect itself and create publicity loyal to industry members. The Workers Rights Consortium is more independent, backed, and partly funded, by labor unions and refuses to cooperate with companies, in order not to “jeopardize its independence”. Therefore, they are capable of carrying out truly independent unprejudiced sweatshop audits.

United efforts of businesses, governments and the United Nations can only make a difference. Sweatshops are the only way of income in many countries. People have no choice, but, to work at sweatshops or die from starvation. Poverty reduction and life conditions improvement are the modern global challenges for the developed countries. It is unfair to make extra billions in profits at the expense of the poor and undeveloped countries in the 21st century. 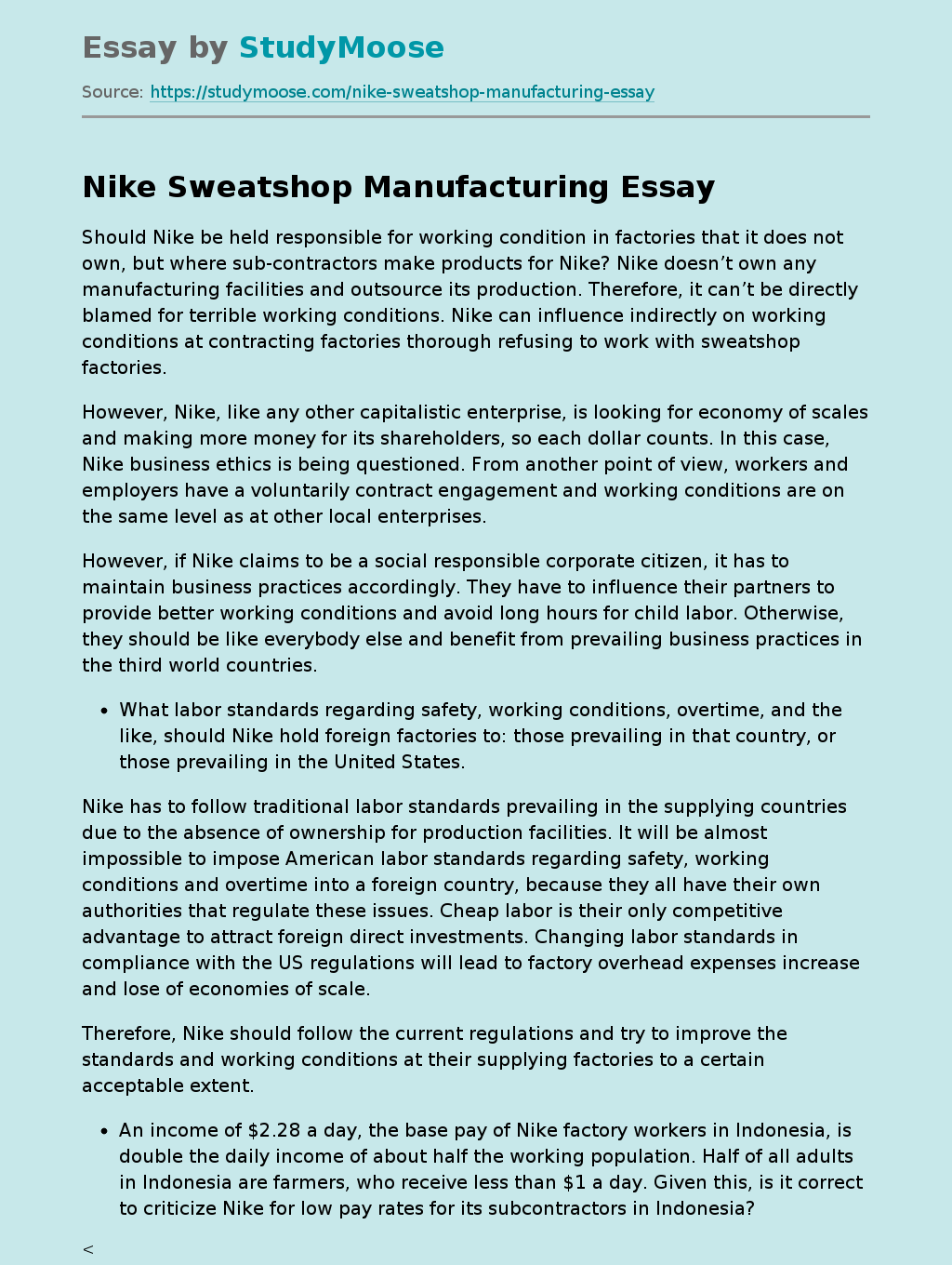