Should Nike be held responsible for working conditions in foreign factories that it does not own, but where subcontractors make products for Nike?Nike is definitely not only responsible but also accountable for the working conditions of foreign factories that it does not own which it subcontracts with. Nike should have taken the initiative to be responsible of the contractors/employees working in other countries on a global scale.

For example: Recently, Pepsi Cola was in the news for allegations of having pesticides in their drink products in India.

Don't use plagiarized sources. Get your custom essay on
“ The Nike Sweatshop Debate ”
Get custom paper
NEW! smart matching with writer

Pepsi ensured that it was not just meeting standards in the Indian Market, but has the same standards of water purification across the world. Pepsi was found in a similar situation such as Nike, they should have realized that even though they were getting cheap labor in other countries that they needed to be socially responsible to ensure that the workers get minimum wages and work in conditions that are acceptable on a global scale.

What labor standards regarding safety, working conditions, overtime, and the like should Nike hold foreign factories to: those prevailing in that country, or those prevailing in the United States?Nike needs to adopt a policy for its overseas operations which will allow them to enjoy the cost advantages that they are realizing by off shoring manufacturing of shoes, yet which will give them the integrity of being a humanitarian company. For example, if Nike adopts the normal standards in the country of manufacturing then it is not able to comply with some of the human rights related issues that global organizations should comply with.

Thus, it is very important that Nike adopts a series of standards that ensures that workers get at least the minimum wages in the respective country but the working conditions should be acceptable enough for workers to work and the minimum age limit of workers should also be enforced strictly.

An income of $2.28 a day, the base pay of Nike Factory workers in Indonesia, is double the daily income of about half the working population. Half of all adults in Indonesia are farmers, who receive less than $1 a day. Given this, is it correct to criticize Nike for the low pay rates of its subcontractors in Indonesia?Each country has their own which is regulated by the labor laws in each country. Daily rates are different according to the skill of workers, type of city the worker lives and works in and the prices of essential commodities in the city and state. For example, the daily wage of workers in factories manufacturing Nike shoes may be higher than farmers in the same city and or state.

If Nike’s contractors are not abiding by the minimum wage regulations for the type of skill and working conditions in which these workers work in, then Nike should be reprimanded and fined on the global scale. Yet, should Nike’s contractors obey the minimum wage regulations set by the government according to a workers skills and working conditions, then Nike cannot be condemned or criticized and comparing wages of one set of workers with another set of workers would be irrelevant.

Could Nike have handled the negative publicity over sweatshops better? What might it have done differently, not just from a public relations perspective, but also from a policy perspective?From a policy perspective, Nike could have handled the negative publicity over sweatshops much better. Nike could have enforced policies for all the contractors who are manufacturing either shoes or apparels for Nike across countries to obey the local rules and also could have created some better policies that would apply to all the factories that manufacture Nike’s products.

In a good faith effort, Nike should have published the names of all the contractors across countries that obeyed the local working regulations, conditions and wages. Nike could have demanded that the local labor inspectors in different countries do an audit of their factories on a regular basis to ensure that contractors comply with the local laws in their respective countries so that the people working there would be safe and fairly treated.

Do you think Nike needs to make any changes to its current policy? If so what? Should Nike make changes even if they hinder the ability of the company to compete?Nike should adopt policies which work across the globe where their factories and workers are concerned. They need to ensure that all their contractors obey both the wage regulations and local working conditions in all countries. Nike can ensure this either by designating a labor inspector in each of their regions whom will report the details of all the workers working in their factories to a local, regional, national, and international board. This report would be submitted to legal experts at the country level and worldwide level to ensure that all the laws are in compliance by contractors of Nike.

If sweatshops are a global problem, what might be a global solution to this problem?Bottom line is that companies should be held responsible for adhering to local, national, and international laws concerning the working conditions of people across the globe.

Next summarize the strategic and operational challenges facing global managers illustrated in your selected case. Also comment on recent global developments affecting the company in this case.

•Ensuring that consumers can get the same quality of product form anywhere across the globe.

•Letting the world know what the company is doing to ensure that its contractors and subcontractors are compliant with Nike’s policies.

Operational Challenges•Ensuring the same training and development of employees across regions, nations and the globe.

•Ensuring that each manufacturing plant has similar working conditions across the globe.

•Ensuring that every worker receives fair wages across the globe. 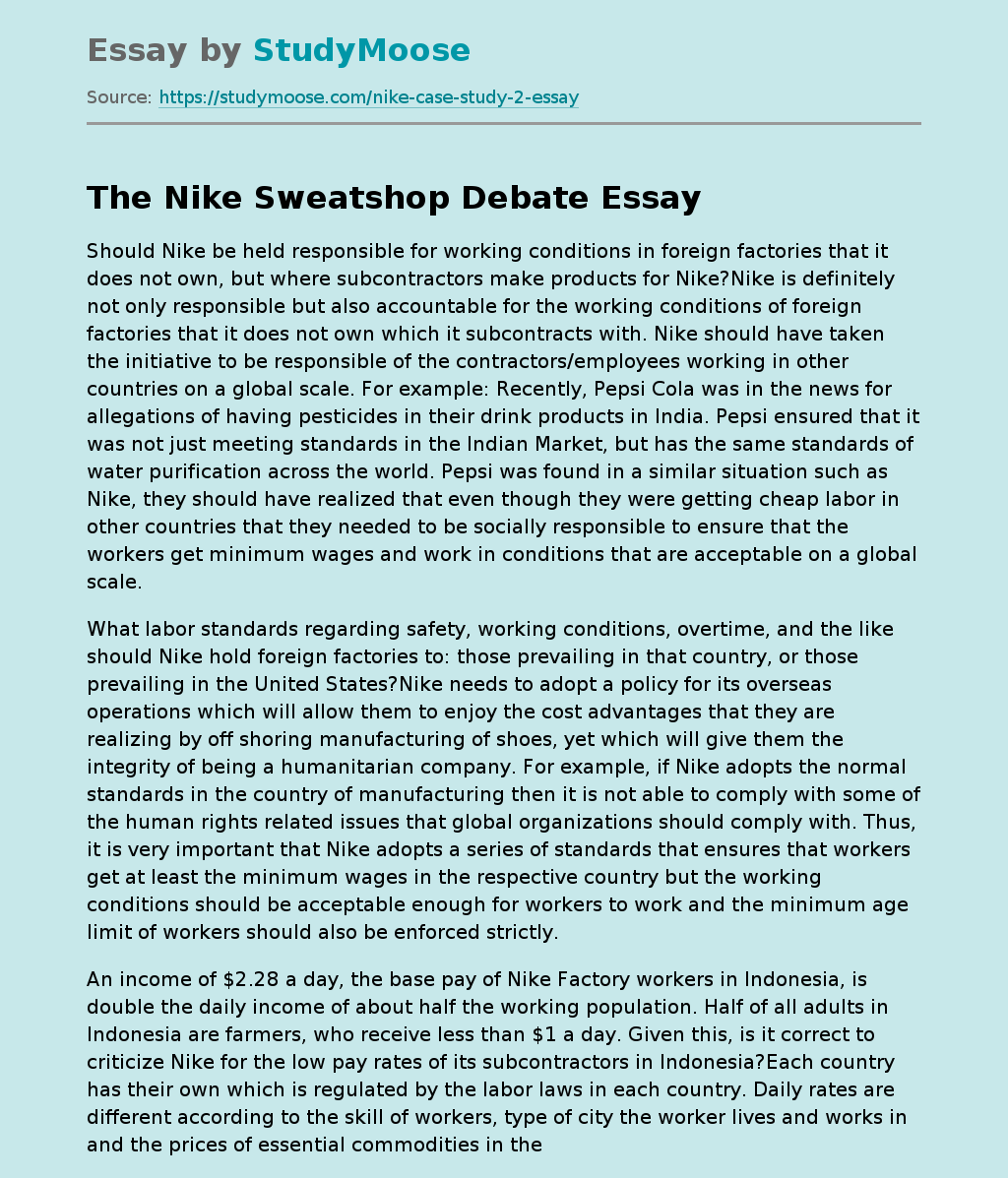