In my opinion, I feel that the author of “Nickel and Dimed”, Barbara Ehrenreich, had ethical intentions when making the decision to investigate “poverty” by emerging herself in the “low-wage lifestyle”. The ethical concern, however, is with her approach. I feel that the way in which it was conducted could be viewed as degrading to those who do not have an alternative to this way of living.

True, hopeless poverty does not have those “reassuring limits” that Ehrenreich had the ability to utilize when she was in a position that made her uncomfortable with the consequences of the poverty she was attempting to study.

Don't use plagiarized sources. Get your custom essay on
“ Nickel and Dimed analysis ”
Get custom paper
NEW! smart matching with writer

By keeping her car, she writes, “Yes, I could have walked more or limited myself to jobs accessible by public transportation,” and “I just figured that a story about waiting for buses would not be very interesting to read.” The sole allowance of this access to transportation, although she also maintained other things such as her ATM card in instances that subject her to hunger or homelessness, was in the interest of entertainment versus science.

Proficient in: Nickel and Dimed

I do feel, though, that Ehrenreich was aware that she was never going to be able to fully commit to this endeavor when she writes, “With all the real-life assets I’ve built up in middle age—bank account, IRA, health insurance, multiroom home—waiting indulgently in the background,” she admits, “there was no way I was going to ‘experience poverty’ or find out how it ‘really feels’ to be a long-term low-wage worker.

” I applaud her efforts to whole-heartedly work the low-wage jobs she acquired and submerge herself in a way of life that was completely foreign to her. In doing so, I feel that the research, despite its flaws, succeeded in exploring the plight of the low-wage worker in our society at that time.

Her inability to budget her expenses with the minimal income that she received, in itself, was a testament to the trials and tribulations that those women face on a cyclic basis throughout their Many of the life situations that the characters in “Nickle and Dimed” were dealing with are not commonly discussed in today’s society. Media portrays “the poor” with stereotypical images. According to an article by Bullock et al. (2001), “women receiving public assistance are stereotyped as lazy, disinterested in education, and promiscuous.” America is depicted as either a classless society or one in which the majority of people are middle class citizens.

Despite the lack of awareness of this type of poverty, I do feel that their arrangements are, unfortunately, not uncommon at all. Ehrenreich’s experience with low-wage work in Florida was significantly different than her experience in Maine. She reports that in Maine, “Even convenience store clerks, who are $6- an-hour gals themselves, seem to look down on us.” In the predominantly white Maine, the maid profession is viewed at in an almost servant-like way, they are the ones who must do the dirty work for the “wealthy” and are not seen as equals. The history of maid work was usually given to minorities, which could explain for this treatment. As for Key West, Ehrenreich did not have the same issues with regard to degradation, however, she struggling with maintaining her low- wage lifestyle.

The waitressing job at Hearthside paid very little so she had to pick up a second job to make ends meet. Because both jobs were so emotionally and physically taxing, Ehrenreich was only able to maintain this for 2 weeks versus the 4 weeks that she had been able to endure in Maine. Although her job as a maid in Maine was also strenuous, and despite the fact that she also had a second job, I believe that her experience in Florida was tougher on her because it was her first attempt at living this lifestyle. By the time she arrived in Maine, I think she had internalized that much of what she was enduring was the everyday lives of the women who she had gotten to know throughout her experience and relented to the existence of poverty.

The drastic increase in affluent households using maid services can be explained by a number of things. According to Ehrenreich, with the influx of women into the workforce, tensions arose over housework. Once women began working and did not solely rely on their husband’s wages, women began to expect more from their husbands. When the idea of this “equal partnership” was not being fulfilled, it caused many disagreements within households. The maid services “even saved marriages” and took advantage by obtaining contracts from these  homes by capitalizing on this idea, to intervene and solve their problems by eliminating the need for an argument over housework. In her statement, “For the first time in my life as a maid, I have a purpose more compelling than trying to meet the aesthetic standards of the New England bourgeoisie”, I believe that Ehrenreich was tired of helping the people she worked for “keep up with the Joneses”.

She had come to the realization that neither her employer, nor the families whose homes she worked in, saw her or the women she worked with as “human”. When they were feeling ill they were told to “work through it” despite the extenuating circumstances that surrounded their health issues and the circumstance maintaining them. This quote represents her “purpose” when having to work to compensate for her ailing teammate and helped explain her views on the injustices that these women were enduring. Besides worrying about the dirt under the carpet that was placed as a test by a home owner or the dust on the hundreds of unread books on shelves, she had to take a step back from the robotic, day to day work of the “maid”.

This helped her truly see the human suffering that she was witnessing firsthand and enraged her to want to advocate for these women so that others were able to see it too.

Nickel and Dimed analysis. (2016, May 04). Retrieved from https://studymoose.com/nickel-and-dimed-analysis-essay 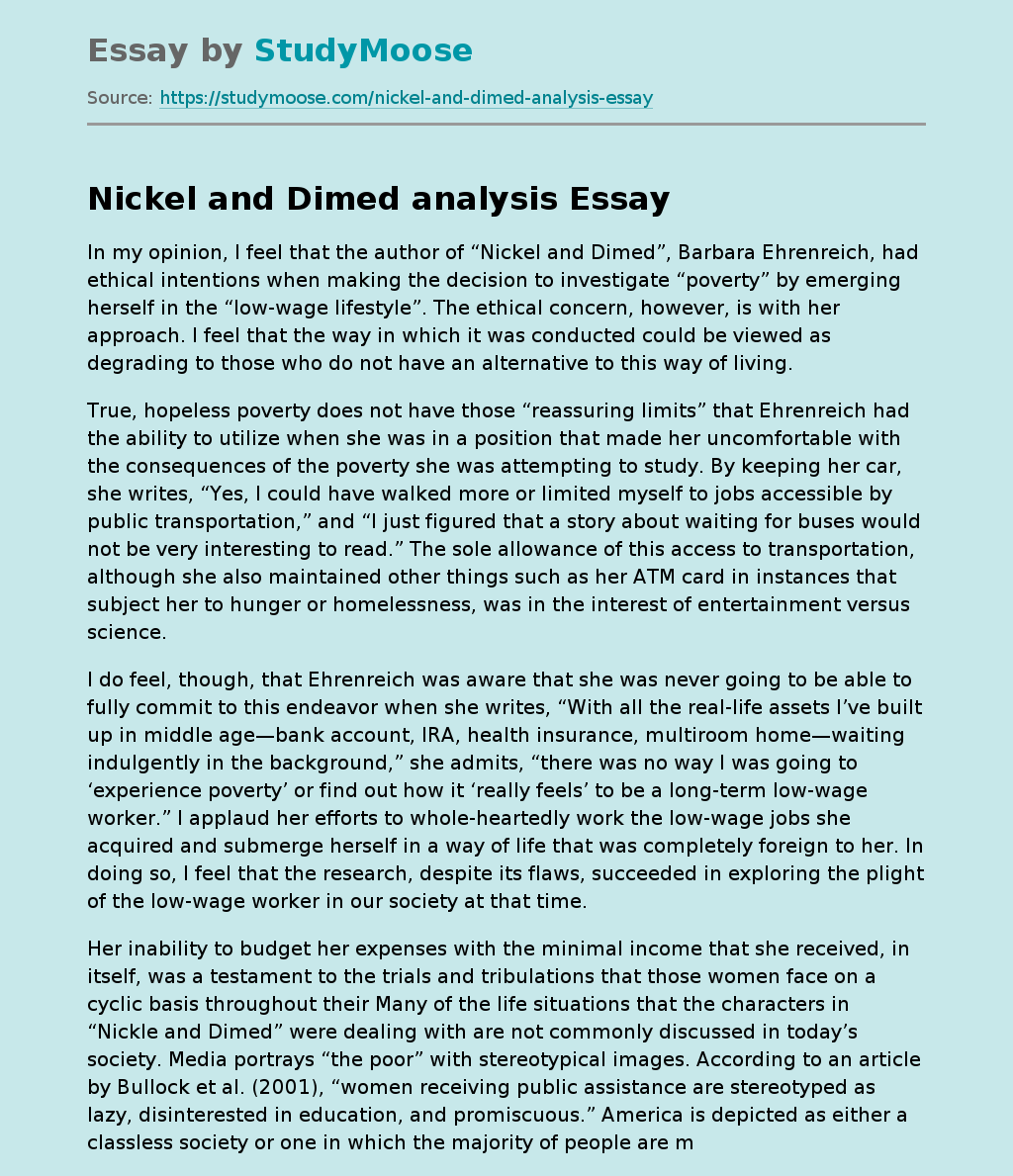