Print and television are two dominant media outlets for the news. Unlike radio, they are predominately visual, although television provides both visual and auditory information. Newspaper and television news organizations each have long-established traditions for reporting news in their respective media, which engenders distinct human behaviors that shape how people obtain news. For instance, television broadcasts present short video-based stories that are sequenced linearly and fit within a specified timeframe for on-air viewing.

One’s access to and the sequence of such stories is controlled by the news organization.

Turn in your highest-quality paper
Get a qualified writer to help you with
“ Newspaper vs Tv ”
Get high-quality paper
NEW! AI matching with writer

There are no archives of stories immediately available, unless the viewer records the broadcast. Conversely, newspapers primarily offer text content intended for in-depth reading whereby the reader selects a story of interest and reads it for however long he or she desires; thus, readers control the access to the information presented in the paper. Additionally, the printed paper can be archived for later reading.

Increasingly, news organizations employ the Web as an outlet to accommodate a growing number of people who seek news online.

More than fifty million Americans utilize the Internet daily to keep informed about local, national, and international events (Horrigan, 2006), a trend that will likely continue. Millions of people seek news through newspaper affiliated Websites (Jesdanun, 2009; Society for New Communications Research, 2007) and TV-oriented sites associated with television news stations, both of which pervade the Web.

While the Web is another vehicle for disseminating news, it represents a highly dynamic interface characterized by a proliferation of motion and static media and interactivity that supersedes what is found in either traditional newsprint or on television.

It is not yet clear how it shapes the way users attend to news information. In addition, newspaper and television news organizations often design sites to underscore their newsprint or television traditions and reporting methods, resulting in distinctive information and graphical layouts that will likely influence user behavior.

For example, the homepage of The New York Times, a newspaper-oriented site, reflects a newsprint layout that engenders reading. It presents a minimalistic design with headlines and article summaries dispersed throughout the page, similar to a newspaper. CNN, a TV-oriented site, features minimal text and more concentrated listings of links, many with corresponding video camera icons indicating that video is available. Visitors spend between 25 and 35 seconds on a Website homepage before leaving (Nielsen & Loranger, 2006) and they typically read pages by scanning.

Because The New York Times features headlines and story summaries distributed throughout the homepage, and high density text, one might expect a user’s visual attention to be more dispersed and browsing to be prolonged compared to a site like CNN, which presents limited text and a concentration of navigation links in the upper portion of the display. Moreover, people perceived newspaper and TV-oriented sites as different, with TV-oriented sites receiving more positive ratings in terms of screen layout, design, and overall rating (Gibbs, Bernas, & McKendrick, in press).

In a survey that examined newspaper, newsweeklies, and TV-oriented sites in the Houston, Texas area, almost half of the sites that attracted 10% or more of the immediate market were TV-oriented (The Media Audit, 2005). The aforementioned factors are compounded by the fact that a convergence of newspaper and television media are occurring, dramatically increasing the complexity of the visual landscape. On American television, it is common for news programs to use visual treatments such as split-screens and animated text that are typically associated with the Web (Josephson & Holmes, 2008, p. 87).

The Web has adopted elements of television. While a provider’s site may reflect its media origins, it will likely integrate characteristics not typically associated with that form of media. For instance, users can watch video on a newspaper site such as USA Today and The New York Times. In the United States, video is available on 92% of the major 100 newspaper Websites (Society for New Communications Research, 2007). Alternatively, users can read news articles on a TV-oriented site such as CNN, as well as participate in blogs about various topics (Gibbs, 2008).

Better understanding of how people allocate visual attention on newspaper and TV-oriented sites is an important area of inquiry for several reasons. First, print and television media and associated reporting approaches pervade traditional media outlets and the Web. Millions of people use these sites daily. Second, major newspapers and TV providers each represent their traditional media origins online in unique ways and these representations are perceptual to users. The extent to which they support or distract user attention is not yet clear but should be examined given the pervasiveness of these sites.

Third, the Web has emerged as a distribution channel for the news. Compared to newspapers and television, it affords distinct interaction modalities that shape how users access and attend to newsprint and television media. For instance, TV news broadcasts, prepared as video for the Web, can be made nonlinear and user controlled but they are often segmented to increase accessibility, which constitutes a dramatically different experience of obtaining the news compared to watching a continuous newscast on television.

Text articles can be presented online without segmentation, as in a newspaper. However, users tend to scan text online so these articles may be read differently from those in newsprint. With greater understanding of where and how users allocate visual attention, developers and information architects can begin to design sites to augment information access and improve Web designs and services overall (Chi, Pirolli, Chen, & Pitkow, 2001; Heer & Chi, 2002). This is especially important for news sites where users actively seek content that changes continuously. 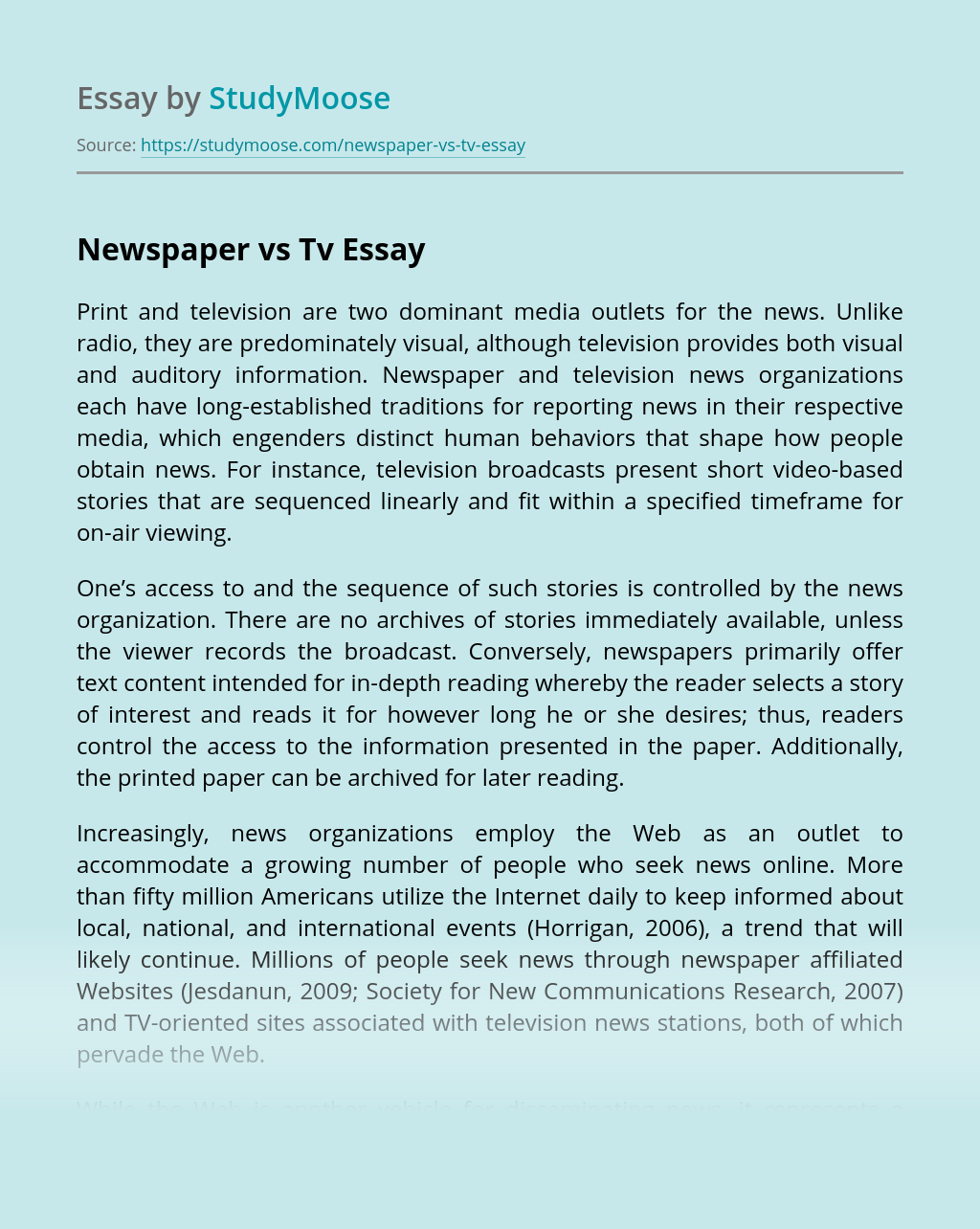 Turn in your highest-quality paper
Get a qualified writer to help you with
“ Newspaper vs Tv ”
Get high-quality paper
Helping students since 2015
Stay Safe, Stay Original